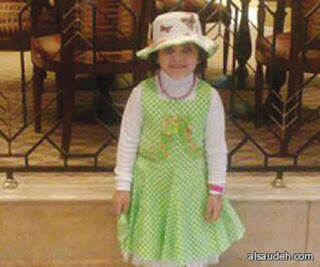 A Saudi Arabian scholar (oxymoron, if you ask me) has been sentenced to nothing but paying a "diya" (blood money) for the murder of his five year old daughter.  This man and his new wife systematically broke the bones of this little girl, even fracturing her skull to the point that doctors could not even save her life.

But hey, when you are a scholar and know about the ways of Mohammed...you're good to go in Saudi Arabia.  Good thing they don't have a war on women there.

The story comes from Emirates 24/7 via The Religion of Peace.

money) after he was convicted of torturing his five-year old daughter to death. His wife quickly reacted by saying she would appeal to demand her husband’s death.

Newspapers in the Gulf Kingdom said the unnamed scholar is still in jail until he pays diya to his wife over the death of his daughter.

The woman said she had not appointed a lawyer during the trial to demand execution of her husband on the grounds she is “ignorant in the law.”

“The body of my daughter has been in the morgue for nearly four months.. I have just received a court permit to bury her,” she said.

In a report in late 2012, the Saudi Arabic language daily Alyoum said the scholar often appears on a local satellite TV channel to deliver religious lectures.

It quoted the girl’s mother as saying her daughter had been systematically tortured by her father and his new wife before she was admitted to hospital in a serious case.

Girls mean nothing in Islam. They are worth less than a dog. So his killing a worthless girl is acceptable in that G-d forsaken land.