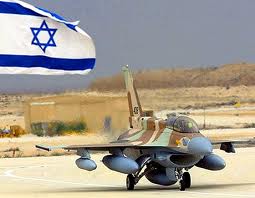 I just saw this and don't have time to verify any new updates but this is pretty huge news.

And it's good to see Israel taking a stand to protect her people.


The Israeli Air Force reportedly carried out an airstrike on a Syrian weapons convoy last night. While some accounts have suggested that the convoy may have been carrying chemical weapons to Hezbollah in Lebanon, the Associated Press reports that the primary target was Russian-made SA-17 anti-aircraft missiles, which were likely destined for Hezbollah.

It is currently unclear whether the strike, which was confirmed to Reuters by four sources, took place in Syrian or Lebanese territory. A high-ranking Lebanese security source told the Daily Star that "[n]o strike took place on Lebanese soil." Haaretz reports that a Lebanese source has said the strike took place near the city of al-Kassir in western Syria, which is approximately 15 kilometers from Lebanon's border.

While Israeli officials have not confirmed the strike, Deputy Foreign Minister Danny Ayalon reportedly told Israel Radio on Wednesday that Israel will "not compromise on the security of the northern front."

On Wednesday evening, the General Command of the Syrian Army and Armed Forces said that Israel had struck "a scientific research center responsible for raising the levels of resistance and self-defense in Jamraya area in Damascus Countryside," according to state-owned Sana. According to the Syrian news agency, two workers were killed and five others injured.

Over the past week, Israeli officials have expressed increased concern with regard to the situation in Syria. On Sunday, Israel deployed Iron Dome batteries in the north, including near Haifa, although an IDF spokesman said the deployment was "not related to any current situation assessments."

The following day, Israel's National Security Council head Yaakov Amidror was sent to Moscow for a "lightning visit" in an attempt "to convince the Kremlin to take steps to prevent Syria's stockpiles from falling into the hands of terrorist groups." On the same day, the New York Times reported that Israeli Prime Minister Benjamin Netanyahu "had [recently] been in marathon meetings for several days with military and intelligence chiefs and senior ministers, with unusual strictures on secrecy."

On Tuesday, Al-Monitor reported that IDF intelligence chief Maj. Gen. Aviv Kochavi was meeting with officials at the Pentagon, including Chairman of the Joint Chiefs of Staff General Martin Dempsey.

Also on Tuesday, the Commander of the Israeli Air Force, Major General Amir Eshel, said that "[t]he weakening governance in neighboring countries heralds greater exposure to hostile activity - Syria is the best example of that. We must deal with a wider array of enemies and adversaries than ever." Eshel added: "We work every day in order to lessen the immediate threats, to create better conditions so that we will be victorious in future wars."

He also warned that "[i]f a threat appears in the long, medium or short range, the Israel Air Force has the ability to exercise force almost instantly, and [implement] almost unlimited options at almost any location."

Posted by Holger Awakens at 3:27 PM