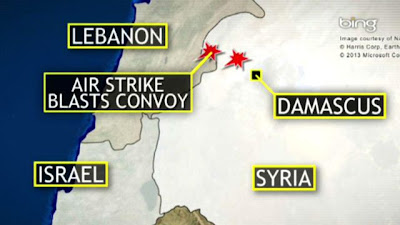 The Russians continue to tell the West and Israel to get screwed as their true colors become more vivid with each day and with Israel being threatened by a move of Syrian chemical weapons into Lebanon where Hezbollah could effectively use those weapons on hundreds of thousands of Israelis, Russia steps up and condemns the attack.  So, let me get this straight - Russia says that Israel is the bad guy for entering Syrian airspace to conduct these operations but Russia is fine with entering Chechnya and Georgia with troops to conduct THEIR operations?

The Russians are a loose cannon in a world right now that can't stomach loose cannons.  How different it might be if we had an American President who would put Putin in his place instead of Mr. MomJeans in the White House who ignores every thing the Russian bear does.


MOSCOW/ BEIRUT: Russia said Thursday it was checking reports of an Israeli air strike against Syria but would condemn the “unprovoked” attack if the information proved true.

The foreign ministry said it was “deeply concerned” by Syrian claims its military research centre had come under Israeli fighter jet attack and other reports of bombs being dropped on a convoy near the Lebanese border.

“If this information is confirmed, then we are dealing with unprovoked strikes against targets located on the territory of a sovereign state, which brazenly infringes on the UN Charter and is unacceptable, no matter the motive used for its justification,” said a ministry statement.

Russia added that it was taking “urgent measures” to clarify the situation.

“We once again call on the end to all violence in Syria, underscoring the inadmissability of any type of intervention from abroad, and the start of inter-Syrian dialogue based on the Geneva agreements of June 30, 2012,” the Russian statement said.

Russia has outraged Western and Arab nations by refusing to join international calls for Syrian President Bashar al-Assad to step down and continues to supply its Soviet-era ally with weapons.

Moscow has for its part repeatedly expressed concern at foreign intervention in a country that is its last major ally in the Middle East.

Russia has strongly backed a pact bickering world powers agreed to last year in Geneva a bid to form a transition government.

That accord defined no specific role for Assad and proved to be unacceptable to the armed opposition because of its demands on him to step aside.

UN-Arab League crisis envoy Lakhdar Brahimi has used urgent shuttle diplomacy in recent weeks to push the Geneva accord on all parties in a bid to halt the escalating violence.

But Brahimi told the Security Council this week that the pact could not be saved in its current form and needed to be altered to work.

“I’m not calling on the Security Council to take action because the Geneva declaration that contains, indeed, a lot of elements that would provide for a reasonable solution to the conflict cannot be implemented as it,” Brahimi told the Security Council in published remarks.

“It needs action from the Council and I have suggested a few ideas to them.”

A top Russian official quickly rejected the idea of the Security Council taking action because “the Council has already made a number of important decisions” on Syria.

“I do not think that in current conditions, the UN Security Council will start work on a new resolution,” Deputy Foreign Minister Gennady Gatilov told the Interfax news agency.

“We are not talking about that yet,” Gatilov said.

The Syrian military denied the existence of any such shipment and said a scientific research facility outside Damascus was hit by the Israeli warplanes.

Hezbollah did not mention any convoy in the statement but said the strike aimed to prevent Arab and Muslim forces from developing their military capabilities.

Posted by Holger Awakens at 4:08 AM