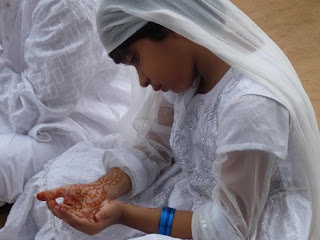 Yup, those Muslims like to get 'em young and it seems a 19 year old Muslim man in Malaysia was six years behind Mohammed in getting the youngest bride on the block when he just married a 12 year old Muslim girl.

The story comes from AFP via The Religion of Peace.


KUALA LUMPUR — Malaysian activists on Friday slammed the wedding of a 12-year-old to her 19-year-old boyfriend, renewing their calls for the government to outlaw child marriages.

"It is better for them to get married rather than doing something improper," Saad Mustafa, the girl's father, was quoted as saying.

"I don't understand why this is allowed in a country like Malaysia... We are talking about a developed country," she told AFP. "The concern is that this is a child being married off... No parents should be doing this."

Child marriages are not uncommon in the conservative Southeast Asian country, where 60 percent of the population of 29 million people are Muslim.

Two years ago, the marriage of a 14-year-old Muslim girl to a 23-year-old schoolteacher triggered similar calls for reform.

Girls below the age of 16 must obtain the permission of Islamic courts, which regulate civil matters for Muslims. But activists say such permission is too readily granted.

There was another outcry in October when two men, aged 19 and 22, were released on probation after courts convicted them of statutory rape.

In both cases the girls, aged 12 and 13, had not been forced, lawyers said.

But activists slammed the judges for freeing the men, saying the question of consent should not have arisen as the victims were below 16.

Earlier this week, a high court overturned the ruling in one of the cases, jailing the 22-year-old man for five and a half years.

Posted by Holger Awakens at 8:46 AM