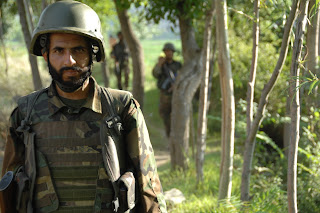 A serious twist to the aftermath of the "green on blue" attacks in Afghanistan where a group of Afghan students (there's an oxymoron for ya) are demanding the reprieve of an Afghan soldier who mowed down and killed five French troops in cold blood.  Now, this Afghan soldier has been convicted of his cowardly act and waits for his execution by hanging but you know me, I'm open to all sides of any argument.

Well, my answer to the students is this:  we'll release this Afghan soldier from custody on the edge of one of your desert areas, we'll give him 30 minutes to run to the creek bed a ways away.  We'll send in one A-10 to try and take him out before he reaches the creek bed.  If he reaches the creek bed, he is free...if he doesn't, well, you can have the bits and pieces left of him.


Yesterday some 500 university students gathered in Jalalabad, the capital of Afghanistan's eastern Nangarhar province, to protest the likely execution of an Afghan soldier convicted of murdering five NATO troops. The soldier's appeal was rejected by an Afghan court last week and he is said to be among a group of convicts soon to be executed by Afghan authorities.

According to AFP, the students blocked the main road leading to Kabul, chanted anti-US and anti-Israeli slogans, and burned US and Israeli flags in protest against the recent deaths of Palestinians in Gaza in clashes between the Israeli military and Gaza-based insurgent groups. The students also called on the NDS, Afghanistan's intelligence service, to prevent the execution. They blamed the NDS for the soldier's arrest, Khaama Press reported, and threatened further protests if their demands were not met by the Afghan government.

"We demand the president withdraw a decree that approves the execution of Abdul Sabor, the soldier who is accused of killing five French troops," the students said in a statement. They also called for a halt to the execution of Taliban prisoners by the Afghan government. Within the past week, the government has executed 14 death row prisoners, some of whom were Taliban, AFP reported.

One of the protesters, Inayatullah, warned that the execution of Sabor would lead to an uprising, according to Pajhwok Afghan News. The students, said to be from the Education Faculty, threatened to close Nangarhar University if Sabor is not reprieved.

They also demanded that a US soldier accused of killing 18 civilians in Kandahar be "brought to justice," Pajhwok reported. US Army Sergeant Robert Bales is currently awaiting results of a pretrial inquiry in a US military court on charges of killing 17 Afghan civilians; prosecutors are seeking the death penalty.

On Jan. 20, Sabor, a soldier with the Afghan National Army in the eastern province of Kapisa, turned his gun on a group of French soldiers as they jogged on their base, killing four outright and wounding 15 others. According to AFP, a fifth French soldier later died of his wounds. Sabor was apprehended the day of the shooting. The attack prompted France to accelerate its withdrawal from Afghanistan. The French combat mission in Kapisa ended last week.

On July 17, a military court sentenced him to death by hanging.

Sabor is the first Afghan to be convicted of a green-on-blue, or insider, attack on Coalition troops by Afghan forces. Given the prevalence of such attacks in recent years -- with 42 attacks so far this year alone, resulting in 60 Coalition deaths -- yesterday's protest in Jalalabad does not bode well for the Afghan system of justice or the safety of Coalition soldiers in Afghanistan.

Posted by Holger Awakens at 1:33 PM