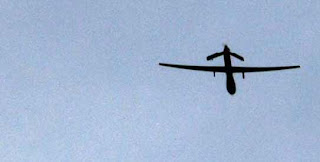 Sometimes I think the CIA just can't resist going into Yemen with out predator drones because shooting up al Qaeda there is like shooting fish in a barrel - lots of nice open spaces....not all that mountainous terrain of Pakistan.

And today we scored a nice hit by drones killing 4 al Qaeda in the Arabian Peninsula.

The story is out of The Long War Journal.


US drones killed four al Qaeda in the Arabian Peninsula fighters in the first strike recorded against the terror group in northern Yemen. A local al Qaeda commander and two Saudis are thought to be among those killed.

The unmanned Predators or Reapers fired several missiles at two compounds in the Abu Jabara area of Saada province, Yemeni security officials and tribesmen told Reuters, which reported that four "militants" were killed. A local AQAP commander known as Hadi al Tais was said to be the target of the airstrike; it is unclear if he was killed.

According to The Associated Press, three AQAP fighters, including two Saudis, were killed in the attack that targeted "a compound a wanted al Qaeda militant from another Yemeni province."

The strike is the first recorded against AQAP in northern Yemen since the US began targeting the terror group in late 2009. All of the other strikes have targeted AQAP's network and fighters in the southern provinces.

Saada is a hotspot where local Salafist groups, backed by AQAP and the government, battle the Houthis, a Shia separatist group that is supported by Iran. The Houthis, who are based in Al Jawf and Saada, have been battling the Sunni government for years. In 2010, the Houthis also battled with Saudi security forces along the northern border. Hundreds of Houthi fighters and Saudi troops were killed in the fighting.

In early December 2011, AQAP officially declared war on the Houthis. Ibrahim Suleiman al Rubaish, al Qaeda in Arabian Peninsula's Mufti, issued the announcement and called the Shia a "virus" on the Sunni people. Rubaish was held at the Guantanamo Bay detention facility before he was released in 2006. AQAP has conducted several suicide attacks against the Houthis, including an attack in December 2011 that killed a military commander, and another that killed 17 people, including a top Houthi leader and his son.

The Yemeni government has used al Qaeda and other local terror groups, as well as pro-government tribes, to battle the Houthis. In January 2008, a spokesman for an al Qaeda cell in Yemen said the government had recruited some of its members to fight in the Saada War. In exchange, the security forces agreed to "ease the persecution of (al Qaeda) members."

In the past, the government encouraged its young men to fight in Iraq and then return to fight against the Houthi. In early 2007, a Yemeni newspaper counted more than 1,800 Yemenis who traveled to Iraq for jihad; their families said the young men were trained by top-level Yemeni military commanders.

The cooperative agreement between the Yemeni government and al Qaeda collapsed after al Qaeda's branches in Saudi Arabia and Yemen merged in 2009 into Al Qaeda in the Arabian Peninsula. AQAP has declared war on the Yemeni state and has conducted numerous attacks against security forces and the oil infrastructure.

US strikes in Yemen

The US is known to have carried out 36 airstrikes against AQAP in Yemen so far this year: one in January, six in March, six more in April, nine in May, two in June, one in July, five in August, two in September, and four so far this month. Other recent airstrikes are believed to have been carried out by the US also, but little evidence has emerged to directly link the attacks to the US.

Since December 2009, the CIA and the US military's Joint Special Operations Command are known to have conducted at least 50 air and missile strikes inside Yemen, including today's strike. [For more information on the US airstrikes in Yemen, see LWJ report, Charting the data for US air strikes in Yemen, 2002 - 2012.]

The pace of the US airstrikes increased as AQAP and its political front, Ansar al Sharia, took over vast areas of southern Yemen starting at the end of May 2011. AQAP seized control of the cities and towns of Zinjibar, Al Koud, Jaar, and Shaqra in Abyan province, and Azzan in Shabwa province.

In May of this year, the Yemeni military launched an offensive to retake the cities and towns held by AQAP. Hundreds of AQAP fighters, Yemeni soldiers, and civilians have been reported killed during fighting that liberated Zinjibar, Jaar, Shaqra, and Azzan.

Since the beginning of May 2011, the US is known to have carried out 46 airstrikes in Yemen. This year, the US has been targeting both AQAP leaders and foot soldiers in an effort to support Yemeni military operations against the terror group. AQAP had taken control of vast areas in southern Yemen and had been expanding operations against the government, with raids on military bases in locations previously thought to be outside the terror group's control.

Five senior AQAP operatives, including Sheikh Abu Zubeir 'Adil al'Abab, have been killed in the 36 strikes so far this year. On Aug. 31, Khaled Batis, a wanted AQAP operative who is said to have been the mastermind of the 2002 bombing of the French oil tanker Limburg, was killed in that attack.

On May 6, the US killed Fahd al Quso in a drone attack in Shabwa province. Quso, who has been described as AQAP's external operations chief, was involved in numerous terrorist attacks, including the 2000 suicide attack on the USS Cole that killed 17 US sailors. The information leading to Quso was obtained by the US from a Saudi operative who had penetrated AQAP.

The US killed Mohammed Saeed al Umda (a.k.a. Ghareeb al Taizi) in an April 22 drone strike on a convoy in the Al Samadah area of Marib province. Prior to the downfall of the Taliban regime in 2001, he had attended the Al Farouq military training camp in Afghanistan. Umda served as a member of Osama bin Laden's bodyguard in Afghanistan before returning to Yemen, and was involved in the October 2002 suicide attack on the French oil tanker Limburg. He escaped from a Yemeni jail in 2006.

And on Jan. 31, US drones killed Abdul Mun'im Salim al Fatahani near the city of Lawdar in Abyan province. Fatahani was also involved in the suicide attack on the USS Cole, as well as the bombing that damaged the Limburg oil tanker in 2002. AQAP said that Fatahani had fought in Iraq and Afghanistan.

US intelligence officials believe that al Qaeda in the Arabian Peninsula poses a direct threat to the homeland. The latest AQAP plot against the West, involving an underwear bomb that is nearly undetectable and was to be detonated on an airliner, was foiled earlier this year. The terror group has planned multiple attacks against targets in the US. A strike in Yemen last year killed both Anwar al Awlaki, the radical US-born cleric who plotted attacks against the US, and Samir Khan, another American who served as a senior AQAP propagandist.

Posted by Holger Awakens at 8:58 AM