When Western Nationalism Died and Ushered In Multiculturalism 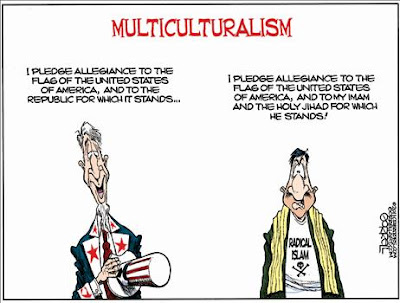 The wave of progressive and socialist Western leaders who have emerged in our world the past decade have show to us exactly what happens when nationalism dies and is replaced with a globalist view of multiculturalism.  The below is a great article from Family Security Matters that showcases one of the biggest plots to destroy our Western civilization.

The question begs to be asked...exactly what cultural superiority do the Muslims bring to any land that they emigrate to?   Explain to me what preferrable cultural significance of Pakistan trumps that of American culture?

Muslim extremism is multicultural. It is the essence of their approach to multiculturalism. Only through, what Gillard calls extremism, do an Egyptian, a Pakistani and a Malay have anything at all in common with one another.

Immigrants from different nations can move to a nation and accept a new national identity. Hundreds of millions of Americans and Australians are the result of such an arrangement. The immigrants can meet up at folk culture festivals where they partake of each other's national foods or they can stick to their own foods-- it doesn't make that much of a difference except for when politicians running for office gain 40 pounds eating bratwurst, pizza and bagels and drinking Guinness at campaign events.

When there is a strong national identity, either former or present, there is rarely a conflict between religious identity and national identity. Those conflicts have usually been settled in the past in some uneasy, but final way, that allows everyone to believe what they want to believe without turning that belief into the defining form of national identity. That way one can be a good Englishman without being a member of the Church of England or a good Frenchmen without being a member of the Catholic Church. Arriving at that point was not easy, but it ended the religious wars of Europe.

Muslims do not have a strong national identity. Their nations are a hodgepodge of military dictators, colonial leftovers and tribal alliances. Their societies are "multicultural" in the sense that they are composed of numerous hostile ethnic groups, tribes and families who are united only by a common religion. This unity is fragile, but it is the most common form of unity that they have and they value it far more than national identity.

To the Muslim, his nation is a fleeting thing, a historical accident by a colonial mapmaker digging up ancient names and drawing lines that cut across the lines of ethnic and tribal migrations, but his religion, though he understands very little of it, is a fine and great thing that has long preceded the nation and means far more to him than the nation does.

Even Muslims in moderate countries poll as identifying more with Islam than with a political faction or national identity. That is why what happened when Muslim democracy was unleashed on the Muslim World was completely inevitable. Muslims chose the one form of identity that they could agree on. It was an identity that excluded Christians, but democracy draws a circle around the largest number of people and outside Lebanon and Israel, those people are all Muslims.

Muslims bridge multiculturalism through religion and they do not accept any form of national identity that is not based on religious unity. That is what the Arab Spring really meant.

Syria, the big sticking point in the Arab Spring, is the place where Islamic unity was impossible because of a split between Sunnis and Shiites, leading to a religious civil war. A similar civil war has been burning in Iraq for ages, occasionally suppressed, before flaring to life again. The successes of the Arab Spring were in countries like Egypt, where Sunni Islamists could count on the support of a majority of the population.

Now when those Muslims are shipped to Europe, America, Canada or Australia, they are expected to become Englishmen, Americans or Australians. But they can't become any of those things because they were never really Pakistanis, Moroccans or Egyptians.

The Pakistani immigrant is a Muslim speaking one of Pakistan's 80 languages and belonging to one of its major ethnic groups (unless he's a descendant of the country's African slaves). The facade of his national identity are just that. On the order of things that he loves or will die for, his country ranks well below his family, his ethnic group and his religion. This does not change when he moves to the UK, especially as Britain is several steps below Pakistan in his estimation, and his estimation of that country was already rather poor.

The Muslim immigrant does not trade one national identity for another. What he does is bring along his local ethnic identity and his global religious identity, and unpacks them both in Sydney or London where he is a member of an ethnic community and a religious community. On top of that he may be an Australian, but he is an Australian in the same way that Sunnis and Shiites are Iraqis or Syrians. All that means is that he will pay taxes, fill out forms and curse the local government officials for being incompetent blockheads, instead of the ones back home. And when his religious identity is at odds with his national obligations, he will do exactly what Sunnis in Syria or Shiites in Iraq have done. He will choose religious identity over national identity.

This concept should not be a particularly foreign one to Gillard. It is likely that she feels a similar identification with fellow progressives in Europe and America, that Hassan feels for his fellow Muslims. Like Islam, progressive politics provides a shared transnational identity based on common goals for an ordered world ruled by an ideal system. Gillard may even feel a greater identification with European Socialists than with more conservative Australians.

This state of affairs is a symptom of the decline of nations. Gillard and Hassan are both consequences of post-nationalism, as are Obama and Morsi, or Hollande and Ahmed in the banlieue. These leaders pay lip service to national identity, but imagine a world without national borders and divisions. That is something they have in common with Muslims, who see nations or borders as abstract entities in the same way that their leftist enablers do.

Gillard subscribes to a post-national identity, and Hassan to a pre-national identity. This is only a technical difference that matters as much as the location of the endpoint of a circle, but in the practical sense they are members of dramatically different identity groups with their own incompatible forms of multiculturalism.

The problem with going post-national is that it turns out to be pre-national. Destroy the national identity and you revert to the religious identity, and before you know it, you have a holy war and a theocracy on your hands.

Progressives have been always too stupid to understand that the consequences of their progressivism in undermining the current, more advanced, phase of human society is the restoration of reactionary social and political systems. In Russia, the Bolsheviks toppled an intermediary government and restored a Czar named Stalin and feudalism under the name of collectivism, to the proud cheers of the world's leftists at the progress they were making. In the Arab Spring, they brought back Islamism and they have brought it back in London and Sydney, and Paris and New York as well.

The left destroyed Western national identity and brought back the holy war, but due to Christian and Jewish secularism and Muslim immigration, instead of Catholics and Protestants fighting each other in Paris and London, it's Muslims rioting in the streets and demanding an Islamic theocracy to rule them. And why not? If rule no longer derives from the people or the nation, but panels of judges and rooms of bureaucrats, then the Islamic version is as legitimate as the Socialist version.

Western government that deny both democracy and nationalism are acting as leftist Mullahs, enforcing their beliefs on everyone else. This is their multiculturalism and it is just as backward, reactionary and corrupt as the Islamic version. And why shouldn't Muslims demand that if they are going to be ruled by a philosophy of the way things should be, then it might as well be their own? The only counterargument that can be offered to is that they are foreigners, but it is not an argument that the progressive left can make after championing immigration and the death of nations.

The West was made post-national and then filled with pre-national peoples. Those pre-national peoples are competing to carve it up into tribal fiefdoms and into a theocracy. What Muslims are doing is extremism, in the same way that advocates of a united Italy or Germany were extremist. They are trying to assemble the tribal fiefdoms into a common Muslim multicultural identity in the same way that they tried to do across the Middle East, Asia and parts of Europe.

Extremism is not the issue. Not unless Gillard were to admit that transforming Australia into a Caliphate where women and non-Muslims have no rights is moderate when done politically, but extreme when done by force. The issue, as in so many conflicts, is identity and organization.

The multicultural Muslim world has imported its own competing form of multiculturalism to Europe, Australia, America and Canada. So far its multiculturalism appears to be more potent than the local secular variety because despite being a third-rate bastardized version of Christianity and Judaism, with some tribal customs and pagan elements mixed in, it's still more vital than the thin gruel that the progressives feed their people to keep them occupied while they dig deeper into positions of power.

Most people, Muslim or non-Muslim, do not find an identity based on celebrating every possible identity particularly meaningful or rewarding. Western multiculturalism is a tourist identity that has no content of its own. It is self-nullifying void, the jaded palate of a decadent society constantly searching for novel experiences and exotic flavors. The native elites find touring cultures and sexual identities to be a rewarding experience, but the immigrants are not so bored and jaded, so decadent and comfortable, that they want to play tourist. What they want is a multiculturalism that is based on one similarity and Islam gives them that.

The West can return to national identity or it can fight a holy war between Islamist Multiculturalism and Progressive Multiculturalism. What it cannot do is avoid the conflict. That is a lesson that Gillard and all the Gillards of the West still haven't learned and by the time they do realize it, it may be too late.

Posted by Holger Awakens at 4:37 AM