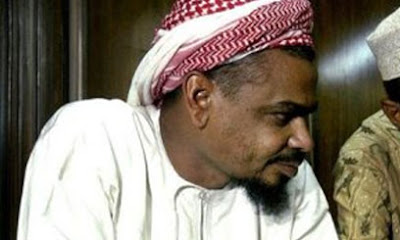 No, it's not Nigeria and it's not Somalia and it's not the Sudan...it's Kenya this time where an al Qaeda-linked terror group's top dog got taken out and his throng of moron Muslim supporters have now gone into their second day of rampage.  I read the article and can't see who is suspected of killing this guy but no matter who, it's great news - well, it's great news for us, not so good for the regular people of Kenya who now have to put up with rampaging Muslims.  I'm guessing that Kenyan security forces did it in some way but who knows, I'm sure this doofus had some enemies in his own ideological cult.


Kenyan Muslims in Mombasa have rioted for the second day in a row after a Shabaab-linked cleric who was recently added to the US's list of Specially Designated Global Terrorists was gunned down.

Shabaab supporters rampaged in Kenya's second largest city after Sheikh Aboud Rogo Mohammed was shot and killed as he was driving with his wife on Aug. 25. Shabaab supporters quickly organized and attacked and looted two churches, torched a government vehicle and other cars, and killed one person. The man was "slashed to death," according to The Daily Nation. Police have arrested 12 people for their involvement in the rioting, which is still ongoing.

Rogo, who served as the spiritual leader of the Muslim Youth Center, a Shabaab and al Qaeda-linked group in Kenya, was listed by the US as a Specially Designated Global Terrorist on July 5 along with two other Kenyans, a Sudanese, and two Eritrean military officers [see LWJ report, 2 Eritrean officials designated for supporting Shabaab]. The other two Kenyans who were designated are Omar Awadh Omar, a facilitator who was involved with the planning of the double suicide attack in Kampala, Uganda in July 2010, and Abubaker Shariff Ahmed, a close aide to Rogo.

The US Treasury Department said that Rogo served as a fundraiser, radicalizer, and recruiter for terrorist activities.

"He continues to exert influence over extremist groups in East Africa as part of his campaign to promote violence throughout East Africa," the Treasury Statement said. "As an ideological leader, Aboud Rogo Mohammed has used an extremist group as a pathway for radicalization and recruitment of principally Swahili-speaking Africans for 'action' in Somalia."

Starting in February 2009, Rogo began issuing "a series of inspirational lectures" in which he "repeatedly called for the violent rejection of the Somali peace process," and urged Muslims to attack United Nations and the African Union Mission in Somali (AMISOM) forces in Somalia. He not only encouraged his followers and other Muslims to wage jihad in Somalia, but provided assistance to those who sought to travel to fight there.

"Aboud Rogo Mohammed also offers guidance on how Kenyan recruits joining al-Shabaab can evade detection by the Kenyan authorities, and which routes to follow when traveling from Mombasa, Kenya, and/or Lamu to Al Shabaab strongholds in Somalia, notably Kismayo," Treasury said. "He has facilitated the travel to Somalia of numerous Kenyan recruits for al-Shabaab."

"As a popular and well-respected Sheikh, Aboud Rogo used his unique gift and knowledge of Islam to inspire and inform thousands of young Muslims all over East Africa," the statement said, according to the SITE Intelligence Group. "Undeniably, MYC and its members are part of the generation of Muslim youths that have been inspired by Sheikh Aboud Rogo's vision of the Muslim Ummah in East Africa."

Shabaab issued a formal statement on Twitter that denounced "the cold-blooded murder of Sheikh Aboud Rogo in Mombasa" and urged "the Muslims to wake up to the Kenyan authority's vicious witch-hunt against their fellow Muslim brothers."

Shabaab said that although Rogo "was not officially a member of Harakat Al-Shabaab Al Mujahideen, he, like the rest of the Muslims in Kenya, shared unbreakable religious ties with the Mujahideen." Shabaab also accused the Kenyan government of conducting "a spate of extra-judicial killings ... against innocent Muslims in Kenya."

Posted by Holger Awakens at 2:42 PM