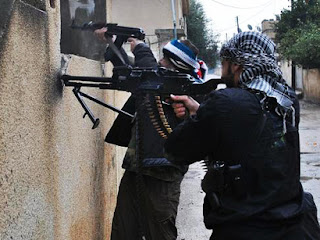 More Christians murdered in the Middle East....does it ever end?  Whether it is Egypt or Yemen or Syria, Christians in the Middle East have a bullseye on their backs.  The blood is flowing and no one, absolutely NO ONE in the Obama administration will utter a word about the religious purge going on.

From TREND via The Religion of Peace.

A family of Syrian Armenians was killed in the Zamalka district of Damascus, Zhamanak newspaper reported referring to the Syrian agency ShamTimes.

According to the publication, the family members were killed by militants of the 'Liua Islam' group, Armenia Today reported. According to the publication, the criminals shot an Armenian family in the street. As a result, husband and wife, their three children and sister of the head of household were killed. Local people confirmed that the victims were members of the local Armenian community. According to the newspaper, mostly Christians live in Zamalka.
Anti-government protests have continued in Syria for about 17 months.

According to UN, the total number of victims of the conflict in Syria is nearing 20,000 people. More than 230,000 people have become refugees. About three million are in need of humanitarian assistance. The Syrian authorities say that they are opposing the well-armed militants.

Posted by Holger Awakens at 5:07 AM