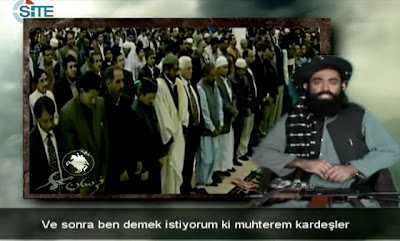 Perhaps the Haqqani Network is starting to feel the heat from several JDAMs recently along with several U.S. special ops teams that are hunting them....so the Haqqanis have send a message to Turkey asking for help from Turkish jihadis.  I'm not exactly sure why Turkey other than it's pretty close by - but Turkey isn't exactly a hotbed for jihadis when you compare it to Saudi Arabia, Egypt and the northern Africa countries.

I'm guessing they won't get too many Turks willing to leave their air conditioned apartments in Istanbul and head for a soon to be frozen mountain top in Helmand province.

The article comes from The Long War Journal.


A senior Haqqani Network leader, who is on the US's list of Specially Designated Global Terrorists for supporting al Qaeda and has captured a US soldier in Afghanistan, has called on Turks and Kurds to fight in Afghanistan and elsewhere.

Mullah Sangeen Zadran, who serves as the shadow governor for Paktika province and is a top aide to Sirajuddin Haqqani, addressed Muslims in Turkey in a videotape with Turkish subtitles, according to the SITE Intelligence Group. The videotape was "produced by Fursan Muhammad Information Group and released on the al Fida' forum on July 30," according to SITE.

In the video, Sangeen told the Turks that it is their duty to wage jihad and chides them for sitting back and enjoying the comforts of the West.

"You say that you are from the Muslims?," Sangeen asked. "Here, Muslims are gathered! But you are still sitting there. We need to get here [to Afghanistan] to defend Islam."

"I want from the Turkish people to fight with their lives and possessions and to defend Islam. It is now time to be with the Taliban and with the other mujahideen, or Allah is warning you with Hell," Sangeen continued.

Sangeen also told the Turks that "jihad is not only in Afghanistan," and said that "America will leave here in disgrace." Afterwards, the Taliban will fight to establish a global caliphate, he stated.

"A State of Islam will be established in Afghanistan, and after our conquest, we will continue in our jihad and we will save the nations under oppression. We will make Islam prevail in the world!," Sangeen said.

Sangeen admitted that al Qaeda is fighting alongside the Taliban, and that the jihad will continue.

"The entire world has gathered here to kill or imprison the Taliban, al Qaeda, and everyone who follows them," including "the Muslim countries," but "the Afghan Taliban never quit the fight," he claimed.

Sangeen also said that the US is "now trying to make peace with the Taliban" because the "Taliban is a force."

"The entire world was in Afghanistan, but look at them now after the fight of the mujahideen," he said. "Now they say: 'Yield to us so we can leave.'"

Sangeen, a longtime ally of al Qaeda, was added to the list of designated terrorists on Aug. 16, 2011. Since 2008, nine top Haqqani Network leaders have been placed on the list; six of them were designated in 2011. All of them have ties to al Qaeda.

In the past, Sangeen has openly admitted the strong links between the Haqqani Network and al Qaeda. In an interview released in September 2009 by As Sahab, al Qaeda's top media outlet, Sangeen said al Qaeda and the Taliban "are all one and are united by Islam."

"We do not see any difference between Taliban and Al Qaeda, for we all belong to the religion of Islam. Sheikh Osama [bin Laden] has pledged allegiance to Amir Al-Mumineen [the Leader of the Faithful, Mullah Muhammad Omar] and has reassured his leadership again and again. There is no difference between us, for we are united by Islam and the Sharia governs us," Sangeen told As Sahab.

Despite the terror group's close ties to al Qaeda and its actions in Afghanistan, the US has not added the Haqqani Network to the list of Specially Designation Global Terrorist Entities. Members of Congress have urged the Obama administration to add the Haqqani Network as a terrorist entity.

US military officials have told The Long War Journal that Sangeen is considered to be one of the most dangerous operational commanders in eastern Afghanistan. Sangeen has organized numerous assaults on US and Afghan combat outposts in the region, and is currently holding Bowe Bergdahl, the only US soldier who has been captured alive in the Afghan theater.

Background on the Haqqani Network

The Haqqani Network is a powerful Taliban subgroup that operates primarily in the Afghan provinces of Khost, Paktia, and Paktika, but also has an extensive presence in Kabul, Logar, Wardak, Ghazni, Zabul, Kandahar, and Kunduz. In addition, the network has expanded its operations into the distant Afghan provinces of Badakhshan and Faryab.

The terror group has close links with al Qaeda, and its relationship with Pakistan's Inter-Services Intelligence agency (ISI) has allowed the network to survive and thrive in its fortress stronghold of North Waziristan, a tribal agency in Pakistan. The Haqqani Network has also extended its presence into the Pakistani tribal agency of Kurram.

In North Waziristan, the Haqqanis control large swaths of the tribal area and run a parallel administration with courts, recruiting centers, tax offices, and security forces. In addition, the Haqqanis have established multiple training camps and safe houses that are used by al Qaeda leaders and operatives and by Taliban foot soldiers preparing to fight in Afghanistan.

The Haqqani Network has been implicated in some of the biggest terror attacks in the Afghan capital city of Kabul, including the January 2008 suicide assault on the Serena hotel, the February 2009 assault on Afghan ministries, and the July 2008 and October 2009 suicide attacks against the Indian embassy.

The terror group collaborated with elements of Pakistan's military and intelligence service in at least one of these attacks. In the past, American intelligence agencies confronted the Pakistani government with evidence, including communications intercepts, which proved the ISI's direct involvement in the 2008 Indian embassy bombing. [See LWJ report Pakistan's Jihad and Threat Matrix report Pakistan backs Afghan Taliban for additional information on the ISI's complicity in attacks in Afghanistan and the region.]

Last summer and fall, the US and the Afghan government linked the Haqqani Network and Pakistan's intelligence service to the June 2010 assault on the Intercontinental Hotel in Kabul in June 2011 and the attack on the US Embassy and ISAF headquarters in September. Shortly after the attack, Admiral Michael Mullen, the former Chairman of the Joint Chiefs of Staff, accused the Haqqani Network of being one of several "[e]xtremist organizations serving as proxies of the government of Pakistan."

The US military has been hunting top Haqqani Network commanders in special operations raids in the Afghan east, while the CIA has targeted the network with a series of unmanned Predator airstrikes in Pakistan's tribal agency of North Waziristan. Both Siraj and Sangeen have been the targets of past strikes. Mohammed Haqqani, a mid-level Haqqani Network military commander and a brother of Siraj, was killed in a Predator airstrike in February 2010.

While the US is targeting the Haqqani Network in military operations and with financial sanctions, it also seeks to negotiate with the terror group to help end the insurgency in Afghanistan. The US is pursuing a policy of "fight, talk, build" with the Haqqanis and other Taliban groups. US officials are said to have met with Ibrahim Haqqani in August 2011 as he was visiting the United Arab Emirates, in an attempt to gauge the Haqqani Network's willingness to negotiate. The talks have failed. Siraj Haqqani has publicly said the group will not independently negotiate with the US and would only do so under the banner of the Islamic Emirate of Afghanistan.

Posted by Holger Awakens at 3:30 PM

Higani wont negotiate with teh US. Ok Mofo you can negotiate with our foreign policy advisors, Mr predator and Mr Reaper. perhaps you can take a hard line with Hellfire for good measure. Either way, the talks wont go your way. These mooks are as dumb as they come.