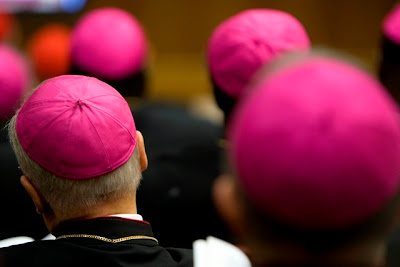 Barack Hussein Obama has made many miscalculations in his tenure as President but probably none will go down in history as more damaging than his decision to attack the Catholics in America.  At this very moment, U.S. Catholic Bishops are mobilizing an army...an army of servants of Christ to wage battle against the Heretic in Charge.

From the report at CNS News:


Having organized 43 plaintiffs—including the archdioceses of New York and Washington and the University of Notre Dame—to file 12 different lawsuits against the Obama administration last Monday alleging the administration is violating the religious freedom of Catholics, the Catholic bishops of the United States are now preparing Catholics for what may be the most massive campaign of civil disobedience in this country since the Civil Rights Movement of the 1950s and early 1960s.


The biggest mistake made by Obama is one of numbers - he has reached out to homosexuals in this country seeking that voting bloc, yet at the same time he is driving away a voting bloc that is 100 times the size of the gays.  How's that for numbers?  I guess that's further evidence why this nation's deficit has risen so steeply under Obama.

The other miscalculation that Obama made is that Catholics in America are all apostates like Nancy Pelosi - Obama actually believes that the majority of Catholics approve of abortion, defy the church's stance on contraception and overall morality issues.  Obama is so wrapped up in his narcissistic aura where he truly believes people in this country are abandoning their faith to follow him that he is setting himself for a November Nightmare.  It's high time that the Protestants of America stand behind their Catholic brothers and simply and decisively take down this President.

U.S. Bishops Prepare Catholics for Civil Disobedience: ‘We May Need to Witness to the Truth by Resisting the Law’


(CNSNews.com) - Having organized 43 plaintiffs—including the archdioceses of New York and Washington and the University of Notre Dame—to file 12 different lawsuits against the Obama administration last Monday alleging the administration is violating the religious freedom of Catholics, the Catholic bishops of the United States are now preparing Catholics for what may be the most massive campaign of civil disobedience in this country since the Civil Rights Movement of the 1950s and early 1960s.

“Some unjust laws impose such injustices on individuals and organizations that disobeying the laws may be justified,” the bishops state in a document developed to be inserted into church bulletins in Catholic parishes around the country in June.

“Every effort must be made to repeal them,” the bishops say in the document, which is already posted on the website of the U.S. Conference of Catholic Bishops. “When fundamental human goods, such as the right of conscience, are at stake, we may need to witness to the truth by resisting the law and incurring its penalties.”

The bulletin insert reminds Catholic parishioners that the bishops have called for “A Fortnight of Freedom”—which they have described as “a special period of prayer, study, catechesis, and public action”—to take place from June 21 to July 4.

The bishops have noted that June 21, when this fortnight will begin, is the Vigil of the Feast of St. John Fisher and St. Thomas More. Fisher was a Roman Catholic cardinal whom the English monarch Henry VIII beheaded in 1535 after he refused to act against his conscience and take an oath asserting that Henry was the supreme authority over the church in England. That same year, Henry VIII also beheaded Thomas More, his former chancellor, for the same reason.

The sterilization-contraception-abortifacient mandate is set to go into effect for most health-care plans on Aug. 1, about four weeks after the bishops' "Fortnight of Freedom."

In campaign speeches delivered this week after the Catholic dioceses and organizations filed their 12 lawsuits, both President Barack Obama and First Lady Michelle Obama indicated that the administration intends to move forward and enforce the mandate.

Mrs. Obama brought it up in a stump speech in Cleveland on Monday afternoon, less than three hours after the Catholic bishops had announced their lawsuits.

"You can tell people how, because we passed health reform, insurance companies will now have to cover preventive care--have to," said Mrs. Obama. "Things like contraception, cancer screenings, prenatal care--and they have to do it at no extra cost. People have to understand that’s what that fight was for."

President Obama signaled his personal commitment to enforcing the sterilization-contraception-abortifacient mandate, using virtually identical language about it in back-to-back campaign speeches Wednesday and Thursday in California and Iowa.

"We don’t need another political fight about ending a woman’s right to choose, or getting rid of Planned Parenthood or taking away affordable birth control," Obama said. "We don’t need that. I want women to control their own health choices, just like I want my daughters to have the same economic opportunities as my sons. We’re not turning back the clock. We're not going back there."

The bulletin insert the bishops have prepared to distribute in parishes around the country in June specifically references the late Rev. Martin Luther King, Jr., who was imprisoned in Birmingham, Ala., on Good Friday 1963 for marching without a permit to protest the racist segregation laws enforced in Alabama in that period.

While detained, King, who was a Baptist minister, wrote his “Letter from the Birmingham Jail,” in which he said the moral justification for civil disobedience against Alabama’s segregation laws was derived from the writings of the Roman Catholic saints Augustine and Thomas Aquinas.

“In his famous ‘Letter from Birmingham Jail’ in 1963,” the bishops says, “Rev. Martin Luther King Jr. boldly said, ‘The goal of America is freedom.’ As a Christian pastor, he argued that to call America to the full measure of that freedom was the specific contribution Christians are obliged to make. He rooted his legal and constitutional arguments about justice in the long Christian tradition: ‘I would agree with Saint Augustine that ‘An unjust law is no law at all.’… A just law is a man-made code that squares with the moral law or the law of God. An unjust law is a code that is out of harmony with the moral law.’”

The bishops have argued that elements of the Patient Protection and Affordable Care Act—AKA Obamacare—including the so-called “preventive services” mandate, would force faithful Catholics to act against their consciences and the teachings of their church. The mandate requires that virtually all health-care plans in the United States cover, without any fees or co-pay, sterilizations and all Food and Drug Administration-approved contraceptives, including those that cause abortions.

The bishops also object to the manner in which Obamacare deals with abortion generally. In April, the U.S. Conference of Catholic Bishops issued a background paper explaining how Obamacare not only would use tax dollars to fund abortions but would also force Americans to pay for abortions with the premiums they would pay to purchase health insurance—which under Obamacare they are mandated to do. The backgrounder was titled, “The New Federal Regulation on Coerced Abortion Payments.”

Additionally, the bishops object to the so-called “religious” exemption to the mandate that requires all health-care plans cover sterilizations, contraceptives and abortifacients. That exemption only applies to “religious” organizations that are primarily focused on inculcating religious tenets and that serve and employ primarily members of their own denomination. This “religious” exemption would not extend to Catholic schools, universities, hospitals, and charitable organizations—and, the bishops argue, it violates the Establishment Clause of the First Amendment by empowering federal bureaucrats to determine which religious institutions are truly “religious” and which ones are not.

In their bulletin insert, the bishops unequivocally state that the administration’s sterilization-contraception-abortifacient mandate would force people to act against their consciences.

“This is a matter of whether religious people and institutions may be forced by the government to provide such coverage even when it violates our consciences,” say the bishops.

“What we ask is nothing more than the right to follow our consciences as we live out our teaching,” they say.

Health and Human Services Secretary Kathleen Sebelius first announced the sterilization-contraception-abortifacient regulation last August. At that time, the bishops submitted formal comments to HHS, calling the regulation an "unprecedented attack on religious liberty" and asking the administration to rescind it in its entirety.

After Sebelius finalized the regulation in January, many Catholic bishops around the country asked their priests to read a letter from the pulpit at Sunday Masses that said: "We cannot--we will not--comply with this unjust law."

Archbishop Timothy Broglio, who leads the Catholic Archdiocese for the Military Services wrote a letter that he asked all Catholic chaplains to read at Sunday masses at U.S. military facilities across the globe. Broglio's letter not only said "we will not" comply with the law, it also said: "It is a blow to a freedom that you have fought to defend and for which you have seen your buddies fall in battle."

As reported by CNSNews.com, the Army told Army chaplains not to read this letter in Mass, a move that Archdiocese for the Military Services described as a violation of the First Amendment rights of Archbishop Broglio and Catholic chaplains.

In the April backgrounder, the U.S. Conference of Catholic Bishop said that another regulation issued by the Obama administration in March of this year confirmed what the bishops had said about Obamacare when it was up for a vote in 2010 and they opposed its passage.

“While some have misunderstood or misrepresented the Act’s role in funding abortions, the new rule confirms that analyses by the Catholic bishops’ conference were accurate on this point,” said the backgrounder.

“Under this Act," it says, "millions of American taxpayers will be forced to help support abortion coverage, in two ways: (1) Through their tax dollars all taxpayers will be forced to subsidize overall health plans that cover elective abortions, contrary to the policy of the Hyde amendment and every other major federal program, and (2) Many of these Americans will also be forced to pay directly for other people’s abortions. Some will say this is technically not ‘tax funding of abortions,’ because the required surcharge will be a premium payment rather than a tax payment as such. But what the payment is called is less important than what it actually does.”

The day after releasing this analysis, the bishops issued “A Statement on Religious Liberty,” that explained the Catholic belief that “an unjust law cannot be obeyed” and called for Catholics to join in what the bishops called “A Fortnight of Freedom” that will run from June 21 to July 4.

Posted by Holger Awakens at 1:44 PM

When Obamacare was being debated these same Bishops came out in favor of it. Even though everyone told them that this would happen. They refused to listen and supported and cheered its passage.

Now today they are against Obamacare and Obama. Funny how they refuse to listen before to us and now are fighting against this law and this man by themselves.

Catholics are slow--but they eventually get the right idea. That is better than all other churches in America that have become islamized