Is the World Offering Up Israel To Islam On a Platter? 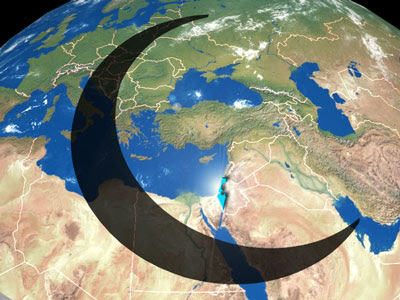 This is a phenomenal article from Family Security Matters about the darkness coming over this world as the lone non-Arab, non-Islamic state in the Middle East, Israel, finds itself with nearly too many threats to overcome.

It is my hope that enough people will wake up to the fact that there can be NO MORE CONCESSIONS to Islam ANYWHERE in this world. This war has been going on for nearly 1400 years and won't end on its own. The time is now to throw everything into the path of the horde.

An Ever Darkening World


In the first volume of my trilogy, Politicide: The attempted murder of the Jewish state, I ended the conclusion page as follows:

In Volume Two, which ended in December, 2009, I concluded with these words:

“The appeasement of the Arab and Muslim world will bring the exact opposite of what the appeasers seek. Winston Churchill wrote the following: ‘Appeasement is like feeding a crocodile in the hope he will eat you last.’ ”

I went on to add:

“The crocodile has no feelings of sympathy, nor does the Muslim Arab whose culture considers concessions a form of weakness and will offer no reciprocal concessions but cruelly demand more and more. It reminds me of the ancient saying from the Jewish Ethics of the Fathers: ‘Whoever is merciful to the cruel, ends by being cruel to the merciful.’ ”

This third volume of Politicideincludes example after example of just such appeasement by growing numbers of individuals in the West towards the voracious Muslim appetite for world conquest, for a Caliphate and for triumphant Islam. Those individuals include politicians, tenured professors, journalists, entertainers, et al.

Nations seek to gain time before the Islamic tide washes over them through appeasement. They do so by ever growing hostility towards the embattled Jewish state in the hope of assuaging the Islamic appetite. But it is all folly.

Western European nations are now submerged in an ever growing, Sharia compliant, Islamic monster that is within the gates. In a generation or two, France, Belgium, Spain, Germany, the Scandinavian countries and Britain may no longer retain a Judeo-Christian culture or civilization except in small pockets, always besieged by a Muslim majority they so foolishly allowed to grow and strengthen within their borders.

The world is changing as both Adrian Morgan and Steve Myers so eloquently warned in my book. And Israel, the one Jewish state, now finds itself after years of foolish concessions to an implacable Muslim and Arab foe, left with so little land, and with a Palestinian Authority occupying territory in the very heartland of the Jewish people’s patrimony - Judea and Samaria - called by its Jordanian Arab name: the West Bank.

And then there is the Gaza Strip: A finger of land pointing into Israel’s heart like some cancerous tumor. This territory is occupied by Hamas, the Muslim Brotherhood branch of the so-called Palestinian Arabs. As Adrian Morgan, editor of Family Security Matters, in his foreword pointed out, this Islamic organization is motivated by an abiding hatred of Jews and not only wishes to exterminate the Jewish state and all its citizens, but seeks to destroy Jews throughout the world.

And now, after Israel in 2005 drove out its own citizen from their villages and farms in the Gaza Strip, 10,000 Jewish refugees from Gaza now live within Israel, their lives embittered by such a breathtakingly stupid Israeli concession.

Since Israel withdrew from Gaza in the hope that the Arabs would live peaceably with them and share in the benefits for all that comes from a true and lasting peace, Israeli villages and towns in southern and central Israel have endured a relentless barrage of some 12,000 deadly missiles.

As I write this, lethal Grad missiles, looted from Muamar Gaddafi’s Libyan weapons caches, have been brought overland into the Gaza Strip - with Egyptian complicity - and are raining down upon the Israeli cities of Ashkelon and Ashdod. Israeli civilians are being killed and maimed.

So many Israeli concessions forced upon past, weak Israeli leaders by friends and foes alike have endangered Israel’s existence more than the combined military and terroristic Arab aggression against her since her reconstitution as a Jewish nation in 1948.

As you will have read in the many chapters of this volume, and the two previous volumes, Israeli concessions have never been met by Arab and Muslim concessions: Never.

The outrageous euphemisms employed to mask Israeli capitulation are well known. “Land for Peace” is the term used to sanitize Israeli national suicide. Land, precious land, with spiritual, historical, and strategic value to Israel, is given away to persuade the Muslim Arab enemy to join in the benefits of peaceful coexistence.

But it is a disastrous charade played upon the Jewish state for, in return for painful Israeli concessions of territory, the Arabs who call themselves Palestinians, never, ever offer peace.

Another suicidal euphemism to mask Israel’s gradual destruction is, “The Two-State-Solution.” This abomination has permitted a delusional belief that two states can live side by side in peace with each other. One state is Israel, a democratic nation. The other state would be “Palestine,” an artificial creation and a terrorist entity that would live and breathe in relentless and genocidal aggression towards its neighbor, Israel.

For such a state to exist that patently and demonstrably has no desire, because of its adherence to its Islamic faith, to ever give up its ambition to destroy the Jewish state, will be the ultimate fatal error of any Israeli government.

It is national suicide and the very euphemism, “Two-State-Solution,” echoes in its hideous similarity that other euphemism employed by Nazi Germany as it systematically exterminated 6,000,000 Jews: “The Final Solution.”

Let me quote from words I wrote in one of the chapters in this book; words which, I believe, must be stated over and over again.

“Even though the native and indigenous peoples of Israel are the Jews, and even though the Land of Israel was given to the Jewish people in an eternal covenant with God, it does not matter to Islam’s adherents, for wherever the Muslim foot has once trod triumphal, that territory is forever regarded as Islamic.

“If such territory is lost to Muslims, then Allah has been diminished and the land must be retaken. Peace, then, is merely a mirage in the desert sands.

“Too many world leaders fail to understand the Muslim mindset. Israeli leaders, who of all people should know better, still fall into the fatal trap of believing that the Western model of lasting peace between nation-states can equally apply in the Middle East between Muslim and non-Muslim nations. It is a fatal fallacy.”

Thus we reach the end of 2011 with this third volume of Politicide. It is a year in which anti-Semitism is on the rise by quantum leaps and the international guilt that permeated nation states after the Holocaust is fast withering away. The spectacle of the individual Jew as a victim is now increasingly replaced with the Jewish state itself cast in the role of the persecuted Jew.

The baffling alliance of the Left with Islam is a phenomenon stalking the world. Its target is the Jewish state even though the Left is protected and free to exercise its political will within the Israeli democracy, yet forbidden to challenge all powerful Islam within the fifty seven Muslim nations; Even proscribed brutally by many.

And today, the extreme Left has unleashed an anti-Capitalist, anti-Free Market, anti-American, anti-Israel and anti-Jewish army of radical students and mostly young people, many brainwashed by their professors in colleges and universities, with the usual aging hippies and useful idiots among them, called “Occupy Wall Street.”

Many cities in the United States and throughout the ever decrepit West are allowing these demonstrators to take over parks and squares, turning public places into unhealthy quagmires. Among the leftist placards are those with pro-Palestinian, anti-Israel and anti-Jewish slogans.

Phyllis Chesler, the feminist writer, saw as far back as 2003, what horrors were emerging in the West. Writing in her book, “The New Anti-Semitism: The Current Crisis and What We Must Do About It,” she penned the following:

“When feminists, gay rights groups, and civil rights activists choose to support Islamic countries where women are subject to honor murders, where homosexuals are imprisoned and sometimes executed, and - in the case of Sudan today and Saudi Arabia before 1962 - slavery is practiced, something irrational is at work. Only anti-Semitism can explain this weird Marxist-Islamic alliance.”

Indeed the Left and Islam in their unholy alliance target the Jewish state. That Islam will turn upon the leftists is guaranteed, yet it will let the Left work its evil upon Israel before, like Churchill’s crocodile, it devours its erstwhile partner.

In the Passover story, which is enshrined in the Haggadah, the book retelling the events of the Exodus and of the order of the Seder meal, there is a profound and millennial old passage:

And so it was and still is.

So let me end with the words of Steve Myers, editor of Israel News Daily and Page One Daily, from his words of praise to this third volume of Politicide:

“Every word of Victor Sharpe's trilogy is well-chosen; even the titles.

“He points out that, as Israel finds itself in dire straits, it often forgets God’s promises to the Jewish people. Even Israel’s own leaders seem willing to compromise and allow Israel to fall into the abyss. If Israel’s leaders will not defend its right to its land: Who will?”

Hopefully you, dear reader, will become one of those who choose to defend and support Israel and what is left of the Free World’s struggle to survive and prosper in an ever darkening world.

Posted by Holger Awakens at 3:48 AM