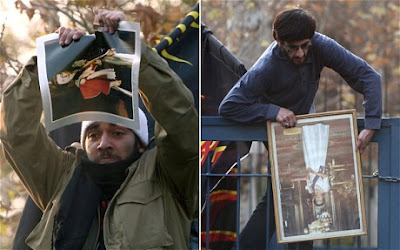 You know, the Brits thought they had seen the ultimate humiliation when the Iranian navy captured their vessel a few years ago and degraded the entire British navy and marines by their treatment and videotaping of the captured Brits but today, when Iranian protesters went totally out of control....who stormed the British embassy in Tehran....who firebombed the building, brought down the Union Jack, burned it and replaced it with the Iranian rag and the whole time...Iranian riot police sat there and watched....well, this was the ultimate slap in the face.

The most extraordinary scenes came at Britain’s embassy near Tehran’s central bazaar, where riot police simply stood by as demonstrators broke into the main building and tore down pictures of The Queen, looted sensitive documents, smashed windows and even threw petrol bombs.

Chanting “death to England”, the protesters - many of them organised by a student branch of the pro-regime Basiji militia - burned the British flag and set a car on fire in protest at sanctions imposed last week on the Iranian banking system.

Diplomats were forced to seek refuge in a secure room behind reinforced doors and windows, from where they managed to use secure communications to alert London. According to one report, six embassy staff had to be rescued by police after being held hostage by the protesters for several hours.

While I was at The Telegraph story, I went into comments there to see what British citizens had to say about this latest bad behavior by the Iranians. Check out these two comments:


"There is only one method for dealing with rabid dogs! The longer we wait the more the disease spreads."

Personally, I like both suggestions there from comments at The Telegraph. My case for bombing the ever loving shit out of Iran gains more momentum each day.


The most extraordinary scenes came at Britain’s embassy near Tehran’s central bazaar, where riot police simply stood by as demonstrators broke into the main building and tore down pictures of The Queen, looted sensitive documents, smashed windows and even threw petrol bombs.

Chanting “death to England”, the protesters - many of them organised by a student branch of the pro-regime Basiji militia - burned the British flag and set a car on fire in protest at sanctions imposed last week on the Iranian banking system.

Diplomats were forced to seek refuge in a secure room behind reinforced doors and windows, from where they managed to use secure communications to alert London. According to one report, six embassy staff had to be rescued by police after being held hostage by the protesters for several hours.

After chairing an emergency meeting of the Government’s crisis committee on Tuesday night, David Cameron described the assault as “outrageous and indefensible” and warned there would be “serious consequences” for the Iranian regime. William Hague, the Foreign Secretary, will address the House of Commons on Wednesday, where he is expected to detail retaliatory measures.

Iran’s government attempted to express regret for the incident, claiming police had tried to stop the protesters, but Mr Hague made clear he held the Iranian government responsible for the attack.

“The United Kingdom takes this irresponsible action extremely seriously,” Mr Hague said. “I spoke to the Iranian Foreign Minister this afternoon, to protest in the strongest terms about these events and to demand immediate steps to ensure the safety of our staff and of both Embassy compounds. While he said that he was sorry for what had happened and that action would be taken in response, this remains a very serious failure.”

The attacks were the culmination of months of steadily worsening relations between Britain and Iran that came to a head last week after Britain imposed sanctions on the Iranian banking system following a UN report that Iran had tried to develop nuclear capable missiles in defiance of sanctions.

At the weekend, Iran’s parliament passed a bill calling for the expulsion of Britain’s ambassador Dominick Chilcott, in retaliation for the move, while some Iranian MPs even suggested protesters should try to emulate students who stormed the American embassy in 1979 during the ‘den of spies’ crisis.

As the attacks began, Mr Hague was forced to leave the House of Commons during the Chancellor’s autumn statement to take personal charge of the Foreign Office response. Iranian diplomats in London were soon called into the Foreign Office where senior officials expressed British “outrage” and demanded Iran meet its obligations under the Vienna Convention.

The UN Security Council also condemned the infringement of diplomatic territory, as did the US, Russia and the EU. President Barack Obama said the attack was "not acceptable" and "all of us are deeply disturbed" by the event.

Order finally began to be restored in the compounds at dusk as Iranian riot police used tear gas and baton charges to clear the compounds and force back the crowds.

The Iranian Foreign Ministry said that several demonstrators had been arrested and that the incident would be investigated.

However it was still uncertain that both compounds had been fully secured. Iranian news reports said that both properties had been evacuated. A Foreign Office spokesman refused to specify how many staff would be flown out of Iran in the wake of the attacks.

Officials admitted that trouble had been expected after Britain announced it would withdraw all co-operation with the Iranian banking system last week in response to the International Atomic Energy Agency’s report on the country’s nuclear ambitions.

The trouble flared after student groups linked to the regime called demonstrations outside the British embassy to mark the one year anniversary of the assasination of an Iranian nuclear scientist, Majid Shahriari. Iran has blamed Western intelligence agencies for his murder.

“We had expected trouble and taken a number of measures - there are regularly protests at the embassy,” said one British official. “What we had not anticipated was that a large number of people would turn up and break into the embassy with the Iranian security forces doing nothing to stop them.”

“It is very hard to describe just how the situation stopped being under control of the Iranians,” said one diplomat. “It is very disturbing that this failure of diplomatic hospitality could have taken place.

Gen Hossein Sajadinia, Tehran’s police chief, told the Fars news agency several protesters who had entered the British embassy had been arrested and would be handed over to the courts.

Nevertheless hardliners within the Islamic regime will exult in pictures that amount to humiliating scenes for a country viewed a pernicious influence on Iran.

The Union flag was torn down to be replaced by the Iranian flag and Shia religious banners. Replicas of the flag was burned alongside homemade versions of the US and Israeli flags.

The Royal crest was carried out through the gates of the compound past riot police in full protective uniform.

The attackers even tried to emulate the students who stormed the American embassy in 1979 by forming a “conquers committee”. American hostages were held for 444 days and resulting in a rift in relations that has not been repaired.

Iran’s increasing isolation and economic distress under sanctions has made Britain’s sprawling diplomatic presence in Tehran an obvious outlet for the regime-sponsored anger. Fawaz Gerges, the director of the Middle East Centre at LSE, said Britain’s diplomatic ties with Iran had become a deadly embrace. He said the Foreign Office would have weight the strategic advantages of the Tehran embassy against the risk to its staff.

“This is the end of the diplomatic road with Britain,” he said. “Iran regards itself as being at war with the US and Britain and are trying to retaliate by zeroing in on the British presence in Tehran.”

Officials denied that any staff had been taken hostage blaming confusion for reports of hostage taking.

Posted by Holger Awakens at 2:42 PM