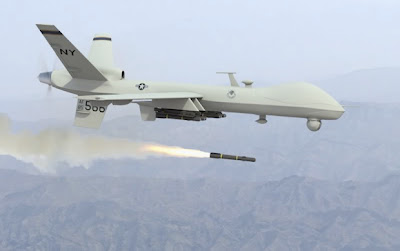 This officially qualifies as a helluva day. :)

First we get the great news that Al-Awlaki is dead and gone in Yemen and then we get three dead jihadis in Pakistan whose vehicle was blown to bits by predator drone fired hellfire missiles.

Story is from The Long War Journal.

The unmanned, CIA-operated Predators or Reapers fired a pair of missiles at a vehicle parked in a compound in the village of Baghar in the Angor Adda area of South Waziristan, according to AFP. Three "militants" were reported to have been killed in the attack.

The exact target of the strike is unknown. No senior Taliban or al Qaeda operatives were reported killed in today's strike.

Today's strike takes place as the US and Pakistan are waging a war of words over the latter's support of the Haqqani Network, the al Qaeda-linked Taliban subgroup that is based in Miramshah in North Waziristan. Several US officials, including Secretary of Defense Leon Panetta, Secretary of State Hillary Clinton, and outgoing Chairman of the Joint Chiefs of Staff Admiral Michael Mullen, have accused Pakistan's Inter-Services Intelligence Directorate, or ISI, of directly supporting Haqqani Network attacks inside Afghanistan. Most recently, the US said that the ISI aided the Haqqani Network in attacking the US Embassy and ISAF headquarters in Kabul.

Today's attack occurred in an area of South Waziristan controlled by Mullah Nazir, the leader of the Taliban in the Waziri tribal areas.

Mullah Nazir has openly supported Taliban emir Mullah Omar and al Qaeda leader Osama bin Laden, and wages jihad in Afghanistan. In an interview with the Asia Times, Nazir rejected claims that he opposed al Qaeda, and affirmed that he considered himself to be a member of the global terror organization.

Pakistan's military and intelligence services consider Nazir and his followers "good Taliban" as they do not openly seek the overthrow of the Pakistani state.

Significantly, more senior al Qaeda leaders have been killed in Nazir's tribal areas during the US air campaign than in those of any other Taliban leader in Pakistan. Nazir also shelters the Mehsuds from the Movement of the Taliban in Pakistan, in violation of the peace agreement with the Pakistani government.

Two other top al Qaeda leaders killed while in Nazir's care were Osama al Kini (Fahid Mohammed Ally Msalam), al Qaeda's operations chief in Pakistan; and Sheikh Ahmed Salim Swedan, one of al Kini's senior aides. Both men were wanted by the US for their involvement in the 1998 suicide attacks on the US embassies in Kenya and Tanzania.

The US believes it killed Abu Zaid al Iraqi during a Feb. 20, 2010 airstrike in Azam Warzak. Abu Zaid is said to be al Qaeda's top financier in Pakistan.

In another strike in Nazir's territory, US Predators also killed Abu Hazwa Jawfi, who is said to have led Jundallah, a Pakistani terror group that is based in Karachi and maintains close ties with al Qaeda.

And Ilyas Kashmiri, the leader of al Qaeda's Lashkar-al-Zil, or Shadow Army, is reported to have been killed in a June 3 Predator strike in Nazir's tribal areas. Kashmiri's death has not been confirmed, however.

The Predator strikes, by the numbers

Today's strike is the fourth in Pakistan's tribal areas this month, and the third since Sept. 23. In the last two strikes, which took place in North Waziristan on Sept. 23 and South Waziristan on Sept. 27, no senior al Qaeda or Taliban leaders were reported killed. The previous strike, on Sept. 11, killed killed Abu Hafs al Shahri, whom US intelligence officials have described as al Qaeda's operations chief for Pakistan.

The pace of the US strikes has been uneven over the past year, and the monthly strike totals have generally decreased. From January through August 2011, the strikes in Pakistan were as follows: nine strikes in January, three strikes in February, seven in March, two in April, seven in May, 12 in June, three in July, and six in August. In the last four months of 2010, the US averaged almost 16 strikes per month (21 in September, 16 in October, 14 in November, and 12 in December).

In 2010 the strikes were concentrated almost exclusively in North Waziristan, where the Afghan and Pakistani Taliban, the Haqqani Network, al Qaeda, and a host of Pakistani and Central and South Asian terror groups are based. All but 13 of the 117 strikes took place North Waziristan. Of the 13 strikes occurring outside of North Waziristan in 2010, seven were executed in South Waziristan, five were in Khyber, and one was in Kurram.

The US campaign in northwestern Pakistan has targeted top al Qaeda leaders, al Qaeda's external operations network, and Taliban leaders and fighters who threaten both the Afghan and Pakistani states as well as support al Qaeda's external operations. The campaign has been largely successful in focusing on terrorist targets and avoiding civilian casualties, as recently affirmed by the Pakistani military.

Posted by Holger Awakens at 2:10 PM

Hat trick for the drones this week.

If I were a Taliban, I'd be considering a career change right now.

Or a new cave Lysol