If You Ever Wondered How Sick British Society Is, This Proves It!

By Findalis of Monkey in the Middle

I have enjoyed British Comedy for many decades.  The hilarious satire of Monty Python, Benny Hill and Dave Allen has brought me out of the blues.  Mr. Bean and The Black Adder have got me laughing.  Most British Humor is funny, some in bad taste, but nothing offensive.  Until now.


A controversial film about Muslim suicide bombers is to be screened as part of a season of programmes to mark the tenth anniversary of 9/11 on Channel 4.

It will show Four Lions by comedian Chris Morris days before memorials take place for the terrorist outrages in New York.

Insiders at the broadcaster say Morris wanted to air the 2010 film on the anniversary itself, but bosses refused.

In the comedy, a group of British terrorists bungle a plan to kill thousands of people at the London Marathon in a terror attack.

Channel 4 will premiere it alongside documentaries about heroes from the emergency services and the killing of Osama bin Laden.

The plans were revealed at the Edinburgh Television Festival by chief creative officer Jay Hunt.

Speaking at a session called No Risk Please, We’re Prime Time, she said: “I’ve just had a robust conversation with Chris Morris about Four Lions and the scheduling of that and how close it is to 9/11. I think we should absolutely continue to push those boundaries.

“It is going out in the next week and a half or so. It is not going out on 9/11 itself. But it is around then because it speaks to that issue.”

Referring to Morris, who presented a paedophile special for TV satire Brass Eye that received a record number of complaints, she said: “He felt strongly that it was an important flavour in the mix, and I think it is.” - Daily Mail

This is so sick, in such bad taste that words cannot describe the feelings I have.  It reminds me of when The Daily Kos decided that this bit of humor was appropriate on 9/11: 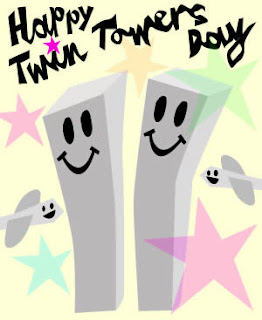 I wonder how the  British would feel if we Americans did a comedy skit in bad taste about 7/7?  Or Princess Diana's Death?  Or any tragedy that they have experienced?

A nanny state with no morals.

The Four Lions previews I've seen suggest the show mercilessly mocks the Islamists. It does not make light of them. If I were Islamist, I'd be profoundly offended.

As far as I can tell, Lions in no way supports Islamists, or Islam, or terrorists.

I have no problem laughing at the Devil.