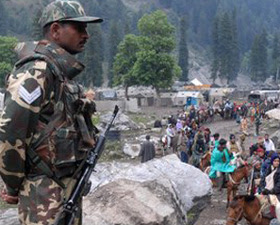 Just a brief article from HinduExistence to put up and remind everyone that the Muslim minority in India is still intent on killing as many Hindus as they can.

As you read this article below, it's almost hard to believe that these bombs on this bus didn't go off - when you consider they were set to detonate remotely, I'd have to say that the bomber simply had a malfunction with his cell phone or other detonating device.

The incident occurred in Kazikund on the Jammu-Srinagar National Highway when a bus with around 45 Amarnath pilgrims was returning to Jammu.

The bus conductor noticed some suspicious bags and immediately alerted the security officials. The area was immediately cordoned off by CRPF personnel and a bomb squad was called in.

The IEDs were placed inside three pressure cookers and were remote controlled. It is suspected that RDX was used to make the three bombs.

Islam is murder and rape.