Gilad Shalit, Where Are You? 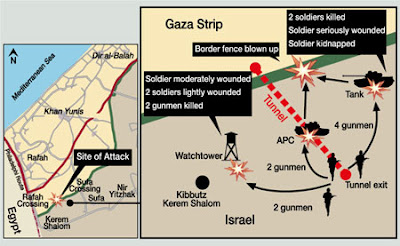 The other day marked the 5 year anniversary of the kidnapping of IDF soldier Gilad Shalit by Hamas and this article from Family Security Matters provides a recap of exactly what happened that day just inside of Israel when 8 Hamas terrorists used a tunnel to gain entry to an Israeli army compound.

Five years has passed since Gilad Shalit was kidnapped and although once again, there is chatter that a deal might be in the offing to return Shalit, we all know just how many times we have had our hopes raised and then shattered.

Today in America, we see demented and misguided youths protesting Israel - they hold their palestinian flags and hold their signs that call Israel "occupiers" yet no one in that crowd of protesters will ever fess up to the fact that they are supporting the killers of the IDF soldiers that fateful day and those that have kept Gilad away from his family for five years.


Gilad Shalit, Where Are You?


Five years ago in June 2006, the song “Hips don’t lie” by Shakira was at the top of the charts, the Pixar movie “Cars” was a blockbuster hit and Simon Cowell’s “America's Got Talent” had just debuted and was the number one show on television.

Shakira is still a hit. As a Unicef ambassador and founder of the Barefoot Foundation, she was in Israel this past week with Shimon Peres at the Israeli Presidential Conference promoting education. Disney/Pixar just released “Cars 2” in 3D and Simon Cowell is working on a new show, “The X-Factor”.

Five years is a long time, but for the Shalit family it has been an eternity.

On Sunday morning June 25, 2006, a group of 8 Palestinian terrorists crossed the border south of the Gaza Strip into Israel. They used a tunnel that passed under the security fence to the area of the Kerem Shalom crossing in Israel, and infiltrated an Israeli army facility.

They penetrated approximately a hundred meters into Israeli territory and split into three groups. The first group shot at an armored car that was empty. The second group attacked a post manned by soldiers of the Desert Patrol. They used explosives and gunfire from light weapons which wounded three Israeli soldiers.

Around the same time at least one rocket was fired and grenades were thrown at a nearby tank. The tank was manned by four soldiers including Gilad Shalit. The rocket hit the back of the tank killing its commander, Lt. Hanan Barak, 20 and Staff-Sgt. Pavel Slutzker, 20. Another soldier was wounded.

Cpl. Gilad Shalit, 19, the fourth soldier in the tank, was wounded in the shoulder, captured and taken by the terrorists back across the border in to the Gaza strip. During his time in captivity he has since been promoted to staff sergeant.

The terrorists were members of the Izz ad-Din al-Qassam Brigades (the military wing of Palestinian governing party Hamas), the Popular Resistance Committees (which includes members of Fatah, Islamic Jihad and Hamas), and the Army of Islam.

After 24 hours of silence on Monday, June 26, 2006, the Palestinians declared they were willing to give information about Gilad if Israel released all Palestinian female prisoners and all juveniles being held in Israeli prisons.

Then-Israeli Prime Minister Ehud Olmert rejected the demands from Hamas and told the members of the Knesset (Israeli Parliament) in Jerusalem,

On June 28, Israeli forces entered Khan Yunis in Gaza to search for Shalit. During the assault on Gaza and they arrest 60 Hamas officials, including a number of elected Hamas lawmakers.

“Israel will not be held hostage – not by terror groups or by a terrorist authority or by any sovereign state.”

The media reported on September 15, that Egyptian mediators received a letter from Gilad Shalit; in the letter he stated he was alive and well. The handwriting was confirmed to be that of Gilad Shalit.

Abu Mujahed, a spokesman for the captors, stated on January 9, 2007, that Shalit,

“has not been harmed at all ... He is being treated in accordance with Islamic values regulating the treatment of prisoners of war.” However, he threatened, “We have managed to keep the soldier in captivity for six months and we have no problem keeping him for years.

On April 8, 2007, Israel receivd by way of Egypt a list of the prisoners Hamas wanted released in exchange for Shalit. The list included 1,400 names, including many who Israel claims have “blood on their hands”, those that were involved with the deaths of Israeli citizens in acts of terrorism.

Then, on June 25, 2007, a year after the corporal’s capture, the military wing of Hamas, Izz a-Din al-Qassam, released an audio tape of Shalit sending a message to his family, friends, the Israeli government and army. He appealed for a prisoner-swap deal to be reached to secure his release. Shalit stated that his medical condition was deteriorating, and that he would require an immediate and lengthy hospitalization.

On February 4, 2008, it was reported that Hamas had sent Shalit's family a second letter written by him. The handwriting was again confirmed to be authentic.

A third letter from Hamas to Shalit’s family arrived on June 9, 2008; the handwriting was again confirmed to be his.

Throughout 2008 and 2009 these “ negotiations” continued. At no point from the time of his abduction did anyone including the International Red Cross ever see him or know his whereabouts. Hamas has continually turned down requests by the Red Cross to see him.

The parents of Gilad, Noam and Aviva, moved into a protest tent outside Ehud Olmert's official Jerusalem residence on March 8, 2009 after the outgoing prime minister stated that the demonstrations calling for Shalit's release were unhelpful.

On September 30, 2009, Israel announced that it would be willing to release twenty female Palestinian prisoners in exchange for a video proving Shalit was still alive. This video and exchange was attributed to intervention by Switzerland. The exchange took place successfully on October 2.

The video that Hamas turned over was a 2-minute and 40-second in length. After being viewed by Prime Minister Benjamin Netanyahu and Defense Minister Ehud Barak it was turned over to Shalit’s family. The video was later played on Israeli television.

In the video, Shalit was seen sitting in a chair in an empty room. He looked extremely frail and emaciated but given the circumstances he is otherwise healthy. He addressed Prime Minister Netanyahu and his parents while reminiscing about times he had spent with his family. At one point he held up a newspaper dated Monday, September 14, 2009. At the end of the video, he stated that the "Mujahideen of the Izz ad-Din al-Qassam Brigades are treating me very well".

Now, 5 years after his abduction, the fight to free Gilad has grown. As reported by the Jerusalem Post on the 5th anniversary,

Hundreds of people began gathering at the Schalit family tent set up outside the Prime Minister's Residence in Jerusalem Saturday afternoon to offer their support to the family's demand that their son, Gilad, be released from Hamas captivity in the Gaza Strip.

Gilad's mother and father, Aviva and Noam, as well as brother Yoel chained themselves to a fence outside the Prime Minister's Residence, saying that they are "a family in captivity."

Aviva Schalit, speaking with Channel 2 news, had a message for the prime minister: "Return Gilad tomorrow morning. We're a family [that's been] in captivity for five years. We're tired of sitting in front of the Prime Minister's Residence. We want to go home, but we want to go home with Gilad."

Israeli celebrities and former POW’s are also doing a live broadcast as the Jerusalem Post explains,

Beginning at 8 p.m., a 24-hour live broadcast began showing various celebrities and former POWs sitting inside a makeshift dark closet-like prison cell - for one hour each - to reflect the conditions of captivity Shalit is living in.

Just yesterday, according to the JTA, Prime Minister Benjamin Netanyahu announced that Israel had accepted a German-mediated deal for Shalit's release, and was awaiting Hamas' response,

"This proposal was harsh; it was not simple for the State of Israel," Netanyahu said Sunday according to a statement released after the weekly Cabinet meeting. "However, we agreed to accept it in the belief that it was balanced between our desire to secure Gilad's release and to prevent possible harm to the lives and security of the Israeli people. As of now, we have yet to receive Hamas's official answer to the German mediator's proposal."

Noam Shalit, Gilad’s father also made a statement yesterday during a press conference in front of the prime minister's official home in Jerusalem,

"We say to Israeli Prime Minister Benjamin Netanyahu: you have no mandate to sentence Gilad to death," Shalit said.

In the past, Israel has not only negotiated with terrorists for the release of their own, but they have even made swaps. In 1985 Israel and the Popular Front for the Liberation of Palestine made the Jibril Agreement in which Israel released 1,150 prisoners in exchange for three Israeli prisoners.

In 2004 Israel made the Tenenbaum deal for the release of an Israeli business man who was kidnapped and taken to Lebanon. He was released in exchange for 435 prisoners held in Israeli prisons.

Shalit family members have now started a new campaign aimed at increasing the pressure on the government, "The National Referendum to Save Gilad." This campaign has a number of former senior members of Israeli security services that are taking part. They will voice their support for the current proposal for a prisoner swap.

According to the proposal the family is advocating, Israel would release 450 terrorists with blood on their hands and 500 others to be chosen by Israel. The next stage of the campaign will be revealed in the coming days.

But the question remains now that it has been 1828 days is Gilad even still alive?

For the first time since Shalit was abducted, the International Red Cross has demanded publicly that Hamas prove that Shalit is still alive.

"Because no sign of life has been had from Shalit for nearly two years," the Red Cross publicly stated that: "We demand that Hamas provide proof that he is still alive." But Hamas has responded with rejection, claiming that the Red Cross is intervening in Israel's "security games."

Calls for Gilad Shalit’s release appear to be gaining momentum, and pressure is mounting on both the Israeli government and Hamas to reach an agreement. Within Israel, a major rally was also held in Caesaria, near Netanyahu’s private residence.

Domestic Israeli frustration appeared to reach a peak last week, when Gilad’s grandfather, Zvi Shalit, stated publicly that he had been told by Defense Minister Ehud Barak that, despite Barak’s support for a deal offered by Hamas, “Netanyahu is opposed and cannot be persuaded otherwise." Barak has since denied that he said this.

According to Zvi Shalit, "The people involved talk to us from time to time, caress our heads, but my dear grandchild Gilad is still rotting away in the Hamas cellars having done nothing wrong, like a common criminal."

We can only hope and pray that Gilad is alive and will be released before the next “Cars” sequel is released.

Posted by Holger Awakens at 3:50 AM