Number of Mosques In America Grows By 42% 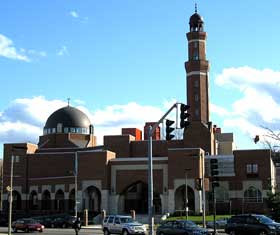 The mosque at Roxbury in Boston, Mass. involved controversy both before and after its construction.


Day in and day out here I try my best to alert Americans to the fact that Islam is about domination...world domination and the fact that the United States of America has always been seen as a great prize by the islamists - primarily because if the Muslims can overtake America, the world is certainly theirs. So, in a nation so predominantly Christian, one would think this task impossible. Or is it?

Look at a statistic from this article at Family Security Matters:

According to the FACT survey, the total number of mosques in the United States increased 42 percent between 1990 and 2000. This is a considerable rate of new growth especially when compared with a 12 percent average increase for the study’s evangelical Protestant denominations, and a two percent average increase among old-line Protestant, and Catholic and Orthodox groups.
Dr. Jane I. Smith, co-director of the Duncan Black Macdonald Center for the Study of Islam, located at Hartford Seminary, pointed out that in the 1980’s and 90’s mosques and Islamic centers were built with generous contributions from abroad. Now, she says, most are being constructed by American Muslims. “There now are many affluent Muslims in America, individuals with organizational skills and with sufficient financial means to build the mosques and Islamic centers that are now common all across our nation.”

I'd like to point out a significant difference between the building of mosques and the building of churches. In the Christian realm in America, churches are built in areas of cities or towns where the people currently have to travel a long distance to find a church or when a church simply becomes to small for the number of members. In the Muslim realm in America, mosques are built on the promise of future Muslims. In other words, the goal of the islamists is to ONE DAY fill the mosques that they build - you see, they are counting on the mass conversions of infidels once they have been conquered. One only has to look at the size of the "mega" mosques that are being built in the southern United States - those mosques, when finished, won't have 15% occupancy in the first few years of their existence....it's all about the need for them in the future.

One other thing to point out is the fact that the mosques are structural billboards...they make statements. They are a message to America that Islam has arrived and it is ready to take over.

In Italy, a national law was passed that bans the construction of ANY new mosques. In Switzerland, a national law was passed that bans minarets on the top of mosques. You see, the Europeans found out the plan...a little bit too late...but they are starting to wake up. The question in America is whether we take the defensive action now or do what the Europeans did and wait until it is too late.


The March of the Mosques


The first mosque in America was built by Albanian Muslims in 1915 in Maine. By 1919, they had established another mosque in Connecticut. Polish-speaking Tatars built a mosque in Brooklyn in 1926, which is still in use. African American Muslims established the first Mosque in Pittsburgh in 1930. The Lebanese Community of Cedar Rapids, Iowa, opened its first mosque in 1935.

The State Street Mosque in New York City was established by Sheikh Dawood Ahmed Faisal in 1955. This mosque represents a special point in the development of the American Muslim community. The Darul Islam movement began from there.

Darul Islam emphasizes a literal translation of the Koran, strict adherence to the words of the Islamic Prophet Muhammad and avoiding of assimilating non-Islamic and western influences. The Koran teaches a sustained suspicion and hatred towards non Muslim social, political, religious and educational institutions.

The Darul Islamic movement is influenced in by the ideologies of Sheikh Syed Abul A’ala Mawdudi, a Sunni Pakistani journalist, theologian, Muslim revivalist leader and political philosopher and a major 20th century Islamist thinker from the city of Lahore.

Mawdudi also founded Jamaat-e-Islami, a group which maintains close ties with international Muslim groups such as the Muslim Brotherhood. One of the objectives of Jamaat-e-Islami is the establishment of a pure Islamic state, governed by Sharia law. They also oppose western ideologies like democracy, capitalism and secularism.

Darul Islam started the first conversions of African-Americans to Islam. They also established prayer areas and mini-mosques in correctional facilities and conversions of prisoners. They were instrumental in getting Muslim Chaplains into the US prison system. By the 1970’s, a network of Darul Islam Mosques was established across the United States, extending to New York, California, Missouri, Virginia, New Jersey, Florida and Arizona. The expansion across the USA continues and now includes Mosques in Canada and the Caribbean.

Although the first mosque was established in America in 1915, only a few mosques were built until a greater growth of mosques began in the 1970s and that tempo continues unabated. The vast majority of mosques (87%) were founded since 1970. Thirty percent of all mosques were established in the 1990’s and 32% were started in 1980’s.

According to the FACT survey, the total number of mosques in the United States increased 42 percent between 1990 and 2000. This is a considerable rate of new growth especially when compared with a 12 percent average increase for the study’s evangelical Protestant denominations, and a two percent average increase among old-line Protestant, and Catholic and Orthodox groups.
Dr. Jane I. Smith, co-director of the Duncan Black Macdonald Center for the Study of Islam, located at Hartford Seminary, pointed out that in the 1980’s and 90’s mosques and Islamic centers were built with generous contributions from abroad. Now, she says, most are being constructed by American Muslims. “There now are many affluent Muslims in America, individuals with organizational skills and with sufficient financial means to build the mosques and Islamic centers that are now common all across our nation.”

Why are Mosques so different to Churches or Synagogues?

On February 23, 2008, WorldNetDaily released an article stating that ‘an undercover survey of more than 100 mosques and Islamic schools in America has exposed widespread radicalism, including the alarming finding that 3 in 4 Islamic centers are hotbeds of anti-Western extremism’.

The Mapping Sharia in America Project, sponsored by the Washington-based Center for Security Policy, has trained former counterintelligence and counterterrorism agents from the FBI, CIA and U.S. military, who are skilled in Arabic and Urdu, to conduct undercover reconnaissance at some 2,300 mosques and Islamic centers and schools across the country.

“So far of 100 mapped, 75 should be on a watch list,” an official familiar with the project said. Many of the Islamic centers are operating under the auspices of the Saudi Arabian government and U.S. front groups for the radical Muslim Brotherhood based in Egypt.

Frank Gaffney, a former Pentagon official who runs the Center for Security Policy, says the results of the survey have not yet been published. But he confirmed that “the vast majority” are inciting insurrection and jihad through sermons by Saudi-trained imams and anti-Western literature, videos and textbooks.

The project, headed by David Yerushalmi, a lawyer and expert on Sharia law, has finished collecting data from the first cohort of 102 mosques and schools. Preliminary findings indicate that almost 80 percent of the groups exhibit a high level of Sharia-compliance and Jihadi threat, including:

· Ultra-orthodox worship in which women are separated from men in the prayer hall and must enter the mosque from a separate, usually back, entrance; and are required to wear hijabs.

o Women are inferior to men and can be beaten for disobedience.
o Non-Muslims, particularly Jews, are infidels and inferior to Muslims.
o Jihad or support of jihad is not only a Muslim’s duty but the noblest way, and suicide bombers and other so-called “martyrs” are worthy of the highest praise.
o An Islamic caliphate should one day encompass the U.S.

· Solicitation of financial support for jihad.

Some of the 9/11 hijackers received aid and counsel from one of the largest mosques in the Washington, D.C., area. Dar al-Hijrah Islamic Center is one of the mosques identified by undercover investigators as a hive of terrorist activity and other extremism. It was founded and is currently run by leaders of the Muslim Brotherhood. Imams there preach what is called “jihad qital,” which means physical jihad, and incite violence and hatred against the USA.

All across the USA, the building of new mosques or the expansion of existing ones continues, with little or no resistance. This has included virtually every state of the union in the last 12 months. Until the REAL agenda is exposed and the leaders of our communities attempt to understand what is behind the motivation of these buildings, they will continue to sprout up, akin to a noxious weed.

They hide in the darkness, under the protection of the First Amendment, call their opponents haters and Islamophobes and with the help of the Liberals, will conquer the USA.

The latest of Vin Ienco’s “Weekly Synopses” (aka Vin’s Notes) can be read online here at his website.

Posted by Holger Awakens at 4:10 AM