The Brilliance of Barack Obama: Let's Pull the Commander of ISAF and American Forces In Afghanistan Out Just As Progress Is Made 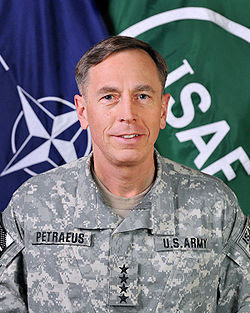 So the news is out that Robert Gates leaves Secretary of Defense the end of June (I'm amazed he made it this long) and will be replaced by Leon Panetta and then Gen. David Petraeus will leave command of the Afghanistan War to replace Panetta as head of the CIA. I'm not all that upset about any of this other than the fact that it is HORRIFIC timing with Petraeus. We just saw Petraeus take over from Gen. McChrystal not that long ago and Petraeus has made some good progress in the war effort. I've blogged about this in the last few months that Taliban attacks are down, IED attacks are down and in general, the Taliban have been less active. I realize it is Spring just coming to Afghanistan but to say that Petraeus hasn't put in some good strategies and tactics would be an injustice.

The article below at the Associated Press mentions that Petraeus will hang on in Afghanistan a "couple of more months" before making the move. Well, isn't that just peachy. Perhaps Barack Hussein Obama thinks that the Taliban are going to give our troops an official escort out of Afghanistan in luxury limousines complete with champagne and fresh fruit?

The fact of the matter is that this summer is going to be rough for our troops - WITHOUT any changes...but now we change command, we start rewriting the manuals, we change directions and all of that shit and then wonder why things start to go to hell.

Why not send Penetta over to the State Department and then name an interim CIA director for six months or a year? Well, I guess that might make sense if you were actually trying to WIN the war in Afghanistan or if you actually gave a shit about our troops.


WASHINGTON (AP) — In a major national security reshuffle, President Barack Obama is sending CIA Director Leon Panetta to the Pentagon to replace Robert Gates, a widely praised Bush holdover, and replacing Panetta at the spy agency with Gen. David Petraeus, the high-profile commander of the Iraq and Afghanistan wars.

Obama's changes, expected to be announced at the White House on Thursday, also will include a new ambassador and war commander in Afghanistan. However, they don't signal any major adjustment in the president's Afghan strategy or the fight against violent extremism.

The moves cement a planned drawdown of U.S. forces in Afghanistan in July and allow Obama to replace Gates, a Republican, with a Democrat with partisan credentials. That appointment also diminishes speculation that Petraeus might become a Republican presidential challenger in 2012.

In the largest change, Gates would step down after managing the turnaround of the Iraq war under President George Bush and the expansion of the Afghanistan war under Obama. He told top Pentagon staff Wednesday that he had recommended Panetta as his successor six months ago.

Marine Corps Lt. Gen. John Allen will move from his post as deputy commander of U.S. Central Command in Florida to take over the Afghan campaign, and veteran diplomat Ryan Crocker will become U.S. ambassador to Afghanistan, officials said.

All the officials spoke on condition of anonymity because the changes had not yet been announced by the White House.

The appointments point to a stay-the-course approach in national security strategy over its next two years, especially in two key areas: the war in Afghanistan in what is expected to be a make-or-break year, and the counterterrorism fight in Pakistan.

Allen and Crocker will be charged with managing a gradual lessening of the U.S. role and a transition to Afghan leadership. Petraeus would take the helm at the CIA against the backdrop of a fractious relationship with Pakistan, which wants a greater say in U.S. counterterrorism actions in Pakistan's frontier regions.

"The White House is maintaining broad continuity," said John Nagl, president of the Center for a New American Security and member of the Defense Policy Board. "Everyone who is coming in are all current in the game. They've been working these issues."

Panetta and Petraeus already have worked closely together and have spent time with military and intelligence leaders in both countries.

A U.S. official who confirmed Panetta's move to the Pentagon said the White House chose him in large part because of his extensive experience in the field during his time as CIA director. The official said Panetta had traveled more than 200,000 miles, to more than 40 CIA stations and bases, and more than 30 countries.

Panetta has also won praise within the CIA by famously winning a showdown at the White House with the former director of national intelligence, retired Adm. Dennis Blair, over who would choose station chiefs overseas. He also argued against the prosecution of CIA employees for their use of enhanced interrogation techniques like water boarding against al-Qaida suspects during the Bush administration. Congressmen praised him for reaching out to their intelligence committees, traveling to Capitol Hill for monthly coffee sessions to rebuild trust.

"The pros are that he is experienced in politics, the Hill, the budget and intelligence," said Michael O'Hanlon of the Brookings Institution. "The cons are that he is not generally known as a classic defense strategist or planner in terms of deep familiarity with operational concepts of war," or with extensive experience with the uniformed military.

Panetta presided over the greatly expanded use of unmanned, armed Predator and Reaper drones aimed at militant suspects in Pakistan.

Petraeus is no stranger to coordinating battle by drone. He has helped push for a quadrupling of drones in Afghanistan, both armed and as surveillance platforms to gather intelligence.

Panetta's experience as a former director of the White House Office of Management and Budget in the Clinton administration will come to the fore, said Todd Harrison of the Center for Strategic and Budgetary Assessment.

Panetta "knows how OMB works, knows the inner workings of the budget process at the White House," Harrison said. "So I think he will be better equipped to negotiate DOD's top line budget than any of the other candidates."

Despite speculation that Obama might choose Secretary of State Hillary Rodham Clinton to succeed Gates at the Pentagon, Clinton took herself out of the running in numerous public declarations. She also has made it clear she intends to retire from government when her current service as secretary of state ends.

Petraeus, who took over as Afghanistan war commander last June, had been expected to leave that post before the end of this year. He would bring a customer's eye to the CIA job as one of the key people to use intelligence provided by the agency and the military during the wars in Afghanistan and Iraq.

Petraeus is credited with helping build a relationship in Iraq with the CIA and the military's elite counterterrorism unit, the Joint Special Operations Command, that led to a tripling of missions against al-Qaida of Iraq and other militant groups.

Before his departure, Petraeus is mapping the phased drawdown of roughly 30,000 forces Obama added to turn around the stalemated Afghan fight last year. Petraeus says battlefield gains have allowed that withdrawal to begin but cautions that the Taliban are far from beaten.

He has said he will present Obama a menu of options for a drawdown from the current level of 104,000 U.S. troops.

The president is expecting choices of how many troops, how fast, and with what associated risk, with the assumption that the faster the withdrawal the greater the risk, according to two senior administration officials, who spoke on condition of anonymity to discuss the war strategy.

The White House is already leaning toward a significant drawdown, with an ideal goal of reaching pre-surge levels of roughly 70,000 troops by early next year, one US official said, but the pace is dependent on how U.S. troops weather the Taliban fighting season, which has only just started.

Petraeus' replacement, Allen, was one of the key commanders who implemented the Sons of Iraq program in Anbar province, which was credited with drafting former militants into cooperation with the coalition. That program is similar to the nascent Afghan local police program, a sort of armed neighborhood watch sanctioned by and paid for by the Afghan government, that U.S. officials believe could be key to securing remote parts of Afghanistan and enabling a faster U.S. departure.

There will also be a wholesale change on the diplomatic side in Kabul, with other top officials at the Kabul embassy leaving their posts along with current Ambassador Karl Eikenberry. Among others departing will be Anthony Wayne, the deputy ambassador, and William Todd, the embassy's director of development and economic affairs, who coordinates all non-military U.S. assistance to Afghanistan, one official said.

Posted by Holger Awakens at 2:43 PM

With respect to Petraeus, heading the CIA is as good a place as any to bury his incompetency. No one at the CIA pays any attention to their heads; anyway, it’s a matter of pride with them.

I wonder how many people will click on your name there and order up a roofing job from a guy slamming an Army general?

Anyone who has military experience knows that Petraeus - rhymes with 'betray us' -is an asshole of the first edition.
He was only too happy to condemn people who burn korans ( which is a right of freedom of speech / expression in the USA ) because that might upset the g-damn muslims and make them harm our troops. Dipshit! They have been trying to harm our troops, our civilians, and anyone not a muslim, for years. I don't remember anyone burning korans on 9/11. And I don't recall any day in recent years when the ragheads have said, Oh, the Americans have not burned a koran today, so tell Hakkim not to blow up the bus station!
So, if I lived anywhere near Atlanta, I would certainly deal with a man who knows sh*t from Shinola, as we used to say in the Corps.