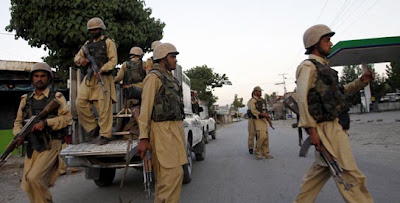 This was a heavy loss for the Pakistani army as a patrol of their was ambushed by Taliban in Khyber agency - the end result of the ambush was 14 troops killed including their commander.

Khyber is one of those areas that is supposed to have been controlled by now...but what we are seeing is some movement by the Taliban between some of the provinces and agencies, depending on where the heat is being applied by the Pakistani military.

Here's the story from DAWN.


PESHAWAR: Pakistan security forces suffered heavy causalities on Monday night when 14 of their soldiers were killed during a militants’ ambush in the Khyber Agency, DawnNews reported.

Official sources said that the militants attacked security forces in the area of Akakhel and 14 soldiers, including a captain and colonel, died when a mortar shell landed near them.

Security forces had been conducting an operation in the area for the past several days and had arrested a number of rebels, sources added.