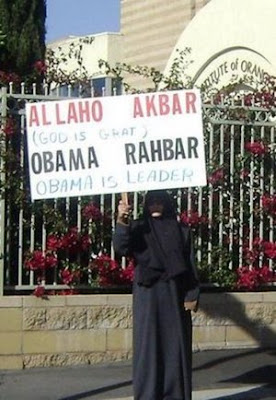 It's official. The Barack Hussein Obama strategy of global Islamic theocracy has achieved a long sought goal today as Egyptian President Mubarak has stepped down. That Obama strategy also included a significant regime change in Lebanon and of course, that happened weeks ago. So, we are now getting closer to the realization of Obama's plan. You may be asking me what exactly that plan is and to do that I have to build the case of what Obama's final endgame is all about.

The Obama endgame is really quite simple and apparent - you all have seen the outreach by Obama to the Muslim world since his inauguration at U.S. President. His first phone call as American President was to Mahmoud Abbas of the Palestinian Authority. One of his first major speeches outside of America was in Cairo, Egypt where he reached out to the Muslim world. The endgame is that Barack Hussein Obama sees himself as the "community organizer" of the entire Muslim world. He truly sees himself as the one leader in this world that can unify Islamists from SE Asia to the Middle East to North America.

Now, the one piece of the puzzle in Obama's endgame that created the chink in the armor was a single little nation. Yes, Israel. Obama knew from day one that he could not attain the leadership role of all of Islam in this world without handing over to the Muslims either a Palestinian state or the destruction of Israel. So, after some half assed attempts by Obama to try the traditional Middle East peace process and finding that Israel's Netanyahu was consistently two or three steps ahead of him, Obama reverted to the back up plan of his.

Barack Hussein Obama's back up plan was and is to bring Israel to the peace process where the Israelis will submit to a full fledged agreement to turn over even more land to the Palestinians, to turn the entire city of Jerusalem to the Palestinians and return the Golan Heights to Syria. The only way to ensure the Israelis do this is to ensure that they have no military option but to do this. And Obama knew that the only way to accomplish this was to install a threat, a viable military threat on each of Israel's borders. Syria's border with Israel was a given - Syria has long been a viable and military enemy of Israel. As mentioned earlier, Obama stood silent as Lebanon was turned over to the Syrians and Hezbollah. That's two borders taken care of. Today, we saw the third border settled as now Egypt will begin the process of negating the Camp David Accords and will vow to destroy Israel. So, that's three borders out of four. The fourth border is with Jordan. So, in order to fact check my observation, I suggest you watch closely as to how long it takes for major demonstrations in Jordan and just how long it is before King Abdullah steps down in Jordan. And then you'll have it...four bordering countries of Israel all united in a common threat to destroy her.

While some of this unfolds and as we see the radical Islamists in Egypt begin the takeover of that country, we will see the bloodletting of Coptic Christians begin. Much of this is going to be hidden from view...much like we saw the atrocities in Irag under Saddam Hussein hidden and like we see in modern day Iran. But it WILL happen. Obama's plan was to oust Mubarak and position Egypt as Israel's enemy - he's not so much concerned about the genocide and persecution of Christians that takes place inside of Egypt.

Consider this - the state of Israel receives a memorandum in a year from Lebanon, Syria, Egypt and Jordan that states that those countries will begin a sophisticated attack on Israel on the same exact day at the same exact time unless Israel agrees to the Palestinian State proposal on the table from Barack Hussein Obama. And as you can imagine, upon receipt of that memorandum, the government of Israel reaches out to the United States asking for a commitment of assistance in the upcoming war and the response from Barack Hussein Obama is that America will not mobilize a single aircraft, ship or troop in Israel's defense and his suggestion is that they take the deal - at that point in time, there would be a tremendous pressure on Israel's Netanyahu to save the country by accepting the deal. And it will be done.

And finally, we will see a return to Cairo, Egypt by Barack Hussein Obama who will spread his arms and announce through the loud speaker system that he has delivered the State of Palestine to the Muslim world. That he, Barack Hussein Obama, has delivered the Al-Aqsa Mosque in Jerusalem back to Islam. The crowd will cheer. Banners stating "Final Death To Israel" will fly in the winds of Cairo. The Muslim world will be united for the first time ever.... The World Caliphate will be close to a new reality and the American people will finally know, just what they put in office in 2008.

G_d save our souls.
Posted by Holger Awakens at 2:39 PM

Plenty of Coptic Christians on the streets of Cairo the past three weeks- do you claim to know whats best for them? The conservative back peddling on democracy is too much.
You enjoy the freedom to criticize the president on this blog any day - in Egypt you would have been jailed or worse, before this week- to suggest that Egyptians should not enjoy the same rights you do is the height of hypocrisy. Obama, American government in general was powerless to stop this.
Today is a victory for freedom and dignity for all Egyptians - Muslim and Christian. Why did you want your readers to skip the first 2:48 second of the video - to find the one bearded kook in the crowd of thousands dissing Israel and America (who spent $70 billion dollars in tax payer money propping up Mubarak)?
The headline of this post is over the top hysterical.
I laugh at your impotent rage. Some days this is the best comedy on the internet - cracking a cold Guinness - here's to you Holger.

Glad to see you still enjoy the blog. Admit it, this is the only place that can hold your interest for more than 2:48.

As for your continued anti-Semitism, just how long do you think the Muslim Brotherhood is gonna keep you and your skinhead friends around?

Classic - You think anyone who supports democracy in Egypt must hate Jews.
I once got beat up by a group of skinheads (it took 4 of them) because I questioned the heterosexuality of a group of guys so obsessed with the right shoes (they seemed to talk endlessly about Doc Martin boots). One of them came on out of the closet years later, proving my point.
God will protect Israel, where is your faith in this?
The Muslim brotherhood will not get more than 20% of the vote in an Egyptian parliament- even less as time goes on. So yeah- I'll be around for a while.

I don't see conservatives back peddling on democracy. What I would like to see is more than one election in Egypt. Then talk to me.

Send a memorandum like that and Israel will do one thing, attack first and damn the US.