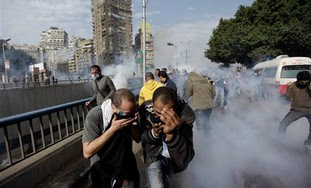 Okay, the title of this blogpost I hope comes through loud and clear - Egypt means jackshit to me - this is a muslim country that's been fucked up for a long time and recently, we have seen one of the most horrendous attacks on Christians take place in Alexandria, Egypt, so 18 dead Egyptians stemming from protests against the Mubarak government means squat to me, personally.

I don't care if Mubarak runs Egypt or if the Shah of Iran comes back from the dead to do it - all I care about is that there is NOT another Islamic theocracy government in the Middle East. I was in a chat room the other night where a young American was very animated over the totalitarian regime of Mubarak - this young person happened to be an American Jew. I made the comment that you better be careful about what you wish for because you might get it...in other words, if this person wanted Mubarak removed from power so badly, that might just happened but who takes over? Does this American Jew REALLY want a Muslim Brotherhood influenced mullah regime to come out of the aftermath? Ask the world, ask the Iranian people how that government of theirs ruled by Islamic clerics has worked out.

At the present time, the Israelis and the Egyptians have a good working relationship - there is very little animosity between the two and they have held fast to their treaties and truces. That could chance in a Cairo minute with a change in government or leadership and if that happens, chances are good that relationship between Israel and Egypt will go to hell in a handbasket.

We have to understand something - there are strong forces in Egypt that could care less what happens to the people there or the young people there. They don't give a rat's ass about the economy. They are oblivious to civil rights. They seek to implement strict Sharia Law and most importantly, they want their hands on the military might of Egypt to wage war on Israel and in the long run, the United States.

So, like I said...I don't care what happens as long as Israel is safe. If it takes Mubarak to stay in power to ensure that, then I am 100% behind him.

Here's one of the latest reports on the situation from The Jerusalem Post.

Nearly 20 people were also reportedly injured in the protests in Suez, with over 900 people injured throughout the country.

Earlier, five people were confirmed dead in protests in Cairo.

Egypt's military was also deployed on the streets of Cairo for the first time since the protests began four days ago.

Parts of the ruling party headquarters in Cairo were going up in flames apparently set by enraged protesters demanding Mubarak's ouster.

Friday's protests saw tens of thousands of anti-government demonstrators pouring into the streets, stoning and confronting police who fired back with rubber bullets and tear gas in the most violent and chaotic scenes yet in the challenge to Mubarak's 30-year rule.

Groups of thousands of protesters, some chanting "out, out, out," gathered at different venues across Cairo, some marching toward major squares and across scenic Nile bridges. Security officials said there were protests in at least 11 of the country's 28 provinces.

The protesters have said they are emboldened by the uprising in Tunisia, another north African Arab nation. Egypt is Washington's closest Arab ally, but Mubarak may be losing US support. The Obama administration has publicly counseled Mubarak to introduce reforms and refrain from using violence against the protesters.

The United States said the situation in Egypt is of "deep concern" and called on Egyptian authorities to enact reforms and allow peaceful protests and open communication as anti-government street protests swell.

An Obama administration official said that the US will review its $1.5 billion in aid to Egypt based on events unfolding in the country.

The US also warned citizens to avoid non-essential travel to Egypt and urged Americans in the country to stay put.

The official spoke on condition of anonymity because of the delicacy of the situation. Egypt has been a key US ally in the volatile region. US officials are now increasing calls on Mubarak to respond with restraint and reverse steps taken to cut off the protesters' ability to communicate.

Mubarak has not been seen publicly or heard from since the protests began Tuesday. While Mubarak may still have a chance to ride out this latest challenge, his choices are limited, and all are likely to lead to a loosening of his grip on power.

Mubarak has not said yet whether he will stand for another six-year term as president in elections this year. He has never appointed a deputy and is thought to be grooming his son Gamal to succeed him despite popular opposition. According to leaked US memos, hereditary succession also does not meet with the approval of the powerful military.

Mubarak and his government have shown no hint of concessions to the protesters who want political reform and a solution to rampant poverty, unemployment and rising food prices.

Posted by Holger Awakens at 2:08 PM

So millions of Egyptian Christians (10% of Egypt) continue to live under a dictator so that a nation of people that are encouraged not to rent to or sell land to Christians (Israel) don't have any inconvenience. Egypt never has and never will be a military threat to Egypt. Way to keep the faith. Why don't you just renounce Christianity, convert to Judaism, move to Israel and get it over with?
Hasn't America been pushing for more democracy in the Middle East for 20 years (except in Saudi Ararbia of course)

First off, saying "Egypt never has" been a threat to Israel - I'm assuming you weren't living in Israel during the Yom Kippur War.

As for persecution of Christians - you are gonna blame that on Mubarak? Did Mubarak drive the car bomb up to the Coptic church? Iraq is a democracy and how many Christians have been killed there in the past 12 months?

Christians living in Egypt are safer under Mubarak than they are living under the Muslim Brotherhood or a bunch of mullahs.

Obama backs the jihadis.
no surprise

You mean the Yom Kippur War where Israel destroyed the Egyptian air force in a day and made short work of pushing their army back across the Sinai and then some. Yeah- close one.
I can see your point about Mubarak - the way I'd rather be Christian in Iraq under Saddam than now, but as an American, when people stand up for increased personal liberty and when they stand up to leaders like Mubarak who have been in power through corrupt elections for way to long I stand with them. I tend to think freedom and open elections are keys to long term peace- I'm kind of shocked that you don't see it that way as an American Conservative.
If Christians are safer under Mubarak then why are they joining their Muslim countrymen in taking to the streets? I've heard more than one report that says so.

The Muslim Brotherhood supports ElBaradei, very few heard of or paid attention to ElBaradei until he accepted the MB and they are now backing him, in Egypt AND the US...I'm all for kicking dictators to the curb but be careful who you wish to see step in...in Iran after the Shah, they accepted the mullahs, now not so much...the MB and ElBaradei in particular HATE Israel as much or more than Iran does...nothing good will come of this calephate in the ME going on right now...

So is democracy and more personal freedom in the Middle East to be suppressed forever for the sake of Israel? Is'nt that what American is supposed to stand for? Sure there will be political parties like the Muslim Brotherhood - I suspect they will get fewer and fewer voted with every election. The arc of history tends to bend toward freedom - at least so far.