Palestinian Woman Calls Out Iran For What They Are...The Puppeteer of the Middle East Conflict 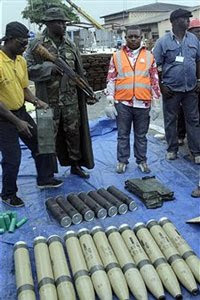 In this article over at Family Security Matters, you will see that the latest shipment of weapons and munitions headed to Hamas from Iran have been intercepted - this time in Nigeria - showing how Iran continues to try and find a new route for supplying the terrorist organization tasked with destroying any chance of Middle East peace.

And at least one person in Palestine is willing to stand up and call out the Iranians for what they are....puppeteers of hate and division.

As it says in the article, this Palestinian woman, Zainab Rashid, better look into one hell of a security detail after making these comments - either that or she better look into a new spot to live a long ways from Tehran.


For those who so naively believe that the way to defuse the Islamist threat to the world is first to solve the Israel/Palestinian conflict, further evidence – not that anyone who has eyes to see actually needs it – of the way in which the Palestinians are themselves being controlled by the forces of the jihad. For the third time, Iranian arms destined for Hamas in Gaza to attack Israel have been intercepted, this time in Nigeria. Ha’aretz reports:

Nigeria's secret service said on Tuesday it had intercepted 13 containers of weapons from Iran in what Israeli defense sources believe may be part of a new smuggling route from Iran to Hamas in Gaza. Rocket launchers, grenades and other explosives camouflaged as building material were seized in the Nigerian port of Lagos after being unloaded from an Iranian ship.

So many in the west – including, I suspect, those who are not hostile to Israel, merely indifferent – fail to grasp that a key reason for the Israel/Arab impasse is that the Palestinian side has always been controlled by state actors pulling its strings. The current chief puppeteer is Iran, assisted by its ally in infamy, Syria. This is even more striking since Hamas, who are Sunni Muslims, are in cahoots with Shia Iran, theologically their sworn enemies.

Palestinian reformist Zainab Rashid absolutely gets the point. In an important article which should be disseminated far and wide, she writes on the liberal Arab website Aafaq:

"What exists is an Arab-Israeli conflict, not a struggle as the resistance front's media continuously claims. The Arab dictatorships use this conflict... as a pretext [to avoid reform] whenever questions arise regarding democracy, pluralism, and government turnover. This is the truth, and there is much evidence to support it.

"The most convincing proof is the attempts of these regimes to make deceitful and callous use of the Palestinian cause and to manipulating Palestinian elements in order to spark disputes. They miss no opportunity to sabotage peace efforts, as we saw at the outset of the latest round of Palestinian-Israeli negotiations, when Hamas received a directive from the Syrian and Iranian regimes which control it to carry out two attacks in the West Bank, shortly before the first session of peace talks, with the intent of undermining the negotiations. This is what all the dictatorships have done throughout the history of this struggle in order to prevent its resolution.

"If we want this struggle to end, we must stop Islamizing the [Palestinian] cause by interpreting [current] affairs according to what is written in religious texts... How can we resolve this struggle while people, relying on the holy texts, still believe in the depths of their hearts that it will continue until Judgment Day, when the trees and rocks will call on the Muslim to come kill the Jews hiding behind them?”

Even more important is what Zeinab Rashid goes on to say:

"Up till now, no important and widely-followed Muslim leader has dared to declare that the head of the terrorists, Osama bin Laden, or the perpetrators of this crime, are heretics. The reason for this is that they carried out jihad al-talab [holy war against infidels on their own soil], which is considered an obligation incumbent upon all [Muslims], [but] which, if carried out by some, exempts the rest... [In other words,] the crime of 9/11 was carried out by [people who acted as] representatives of all Muslims.

In another sense, according to shari'a, those who carried out the 9/11 crime were immeasurably better Muslims than the so-called moderate sheikhs. The problem lies in the fact that in Islam there is no moderation versus extremism. [My emphasis] [Moreover,] in reality, one who calls himself a moderate has no power, money, or equipment with which to carry out what can be carried out by an extremist, who does have some power, as well as plenty of money...

..."Violence is at the foundation of Islam. Any attempt to claim that violence has no roots in Islam, and that [Islam] was spread by pleasant and tolerant means, is an attempt to turn religious texts upside down..."

I hope this woman has personal protection. What courage.

She undoubtedly puts herself in danger by speaking such home-truths. How shameful that, in the land of the free, our spoiled and frivolous liberals are quite incapable even of hearing them.

Posted by Holger Awakens at 2:29 AM