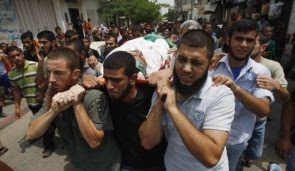 Yesssssssssss! One of the top five Hamas military commanders met his end last night as an Israeli air strike hit his convoy and ended his life of terror - the pig is dead and gone, good riddance. The Israeli response was due to a rocket attack on the Israeli city of Askelon and once again, we see the Netanyahu government wastes NO time in retaliating against Hamas or any other terrorist attack from Gaza.

From the article at Haaretz:

Hamas on Saturday vowed revenge after one of its senior commanders was killed in Israeli air strikes on Hamas-linked targets in the Gaza Strip on Friday night.

The Hamas operative, a 40-year-old member of Hamas' military wing, was killed in an explosion near the Nuseirat refugee camp south of Gaza City in the center of the Hamas-controlled strip. Another 13 Palestinians were hurt.

The dead man is believed to be Issa al-Batran, a commander of Hamas forces in the central Gaza region.

The Israel Defense Forces confirmed the air-strike, which the army said targeted a Hamas-linked site in the northern Gaza Strip, a weapons-manufacturing warehouse in the central Gaza Strip and a weapons-smuggling tunnel in the southern Gaza Strip.

Now, first of all, I apologize for the ridiculous Haaretz article here - the pansy-assed, terrorist appeasing Israeli agency did a shit job on this attack but I had some issues with trying to load the other accounts of this successful retaliatory strike. But no matter how Haaretz wants to dress this thing up, the fact of the matter is this - Hamas lost a key operative commander that stings 'em bad.

The other effect of this strike by the Israelis is that seed of fear that is once again put into the minds of Hamas senior leaders - once the rocket attack occurred at Ashkelon, it wasn't long when all of a sudden al-Batran is taken out - as in the IDF knew EXACTLY where he was the whole time so if you are a Hamas leader today and some fly by night jihadi group fires a katyusha rocket into Israel, chances are good you've got a laser on your ass and the JDAM or hellfire isn't far behind. Comforting, isn't it? Mwahahahaha!


Hamas on Saturday vowed revenge after one of its senior commanders was killed in Israeli air strikes on Hamas-linked targets in the Gaza Strip on Friday night.

"This new stupidity won't easily pass. We promise revenge for the blood of our martyr," the al-Qassam Brigades said in a leaflet faxed to reporters.

The Hamas operative, a 40-year-old member of Hamas' military wing, was killed in an explosion near the Nuseirat refugee camp south of Gaza City in the center of the Hamas-controlled strip. Another 13 Palestinians were hurt.

The dead man is believed to be Issa al-Batran, a commander of Hamas forces in the central Gaza region.

Batran, thought to have been involved in manufaturing rockets, has been the target of a number of Israeli assassination attempts, the most recent of which, in January, killed wife and five children.

The strikes on Gaza, which Palestinian sources described as the heaviest since Operation Cast Lead, Israel's two-week assault on the Gaza Strip a year and a half ago, came after a rocket fired from the Palestinian territory exploded in the city of Ashkelon earlier in the day.

The National Resistance Committee, a group which supports the Hamas government in Gaza, claimed reposnsbility for the rocket attack, Israel Radio reported on Saturday

Later in the day, the IDF shot at and wounded two Palestinians near the Erez crossing on Gaza border after they ignored warnings to retreat, the broadcaster said.

The Israel Defense Forces confirmed the air-strike, which the army said targeted a Hamas-linked site in the northern Gaza Strip, a weapons-manufacturing warehouse in the central Gaza Strip and a weapons-smuggling tunnel in the southern Gaza Strip.

Earlier Friday, Israel lodged a complaint to the United Nations about rocket and mortar attacks launched from the Gaza Strip into southern Israel.

A Grad-type rocket fired by Palestinian militants in Gaza struck close to an apartment building in a residential area of Ashkelon on Friday morning, while two mortar shells exploded in the western Negev just a few hours later.

"These recent attacks on southern Israel from the Gaza Strip seriously violate international law and should be adequately addressed and condemned by the international community," Israel's ambassador to the UN Gabriela Shalev wrote in a letter to UN chief Ban ki-Moon. "In response to the escalating threat of terrorism, Israel will exercise its right of self-defense and will continue to take all necessary measures to protect its citizens."

Shalev wrote that the attacks highlighted the dangers emanating from the Hamas-controlled Gaza Strip.

The Katyusha rocket hit the populated neighborhood just after 8:30 A.M., causing some damage to the nearby building and to a number of parked cars. There were no casualties in the incident, but at least two people were treated for shock. Residents said that the Color Red rocket alert sounded prior to the explosion.

The Israeli military believes that Hamas was not responsible for the Grad attack and that the Islamist organization which controls the Gaza Strip is not interested in escalating tensions in the area, Army Radio reported.

The attack on Ashkelon was one of the first to strike the city after months of quiet since Israel launched a three week military campaign against Hamas in the Gaza Strip in late 2008, called Operation Cast Lead in Israel.

"No doubt this is the most serious event that happened since Operation Cast Lead," Ashkelon mayor Benny Vaknin told Israel Radio. The city is located about 12 km (7 miles) up the coast from the Gaza Strip and has some 125,000 residents.

Prime Minister Benjamin Netanyahu said in a statement from his office: "Israel takes the firing on Ashkelon very seriously."

While rocket fire has continued since the devastating war, much of it has targeted smaller towns closer to the border. Four Qassam rockets and two mortar shells were fired at Israel last weekend, none of them causing any casualties as they hit open areas of the western Negev.

Israel often carries out strikes against smuggling tunnels or outposts of Hamas after such attacks.

No group in Gaza claimed responsibility for the rocket fire. Hamas has said it is trying to stop militants from firing at Israel, but smaller groups have continued the attacks.

Posted by Holger Awakens at 7:41 AM