With Immigration On Our Minds, Let's Talk About the Inevitablility of Sharia Law In America 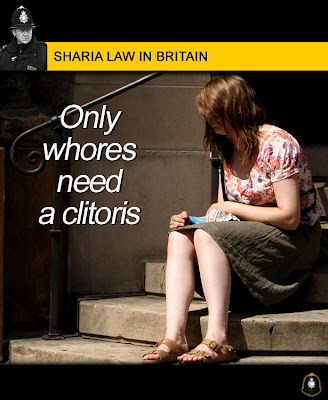 Okay, this is one awesome article at Eurasia Review written by David Greenfield and in this article, Greenfield lays out some hugely prophetic words as to just how islam's Sharia Law will take hold, not only in the West in general, but in America. Unless it is stopped.

My favorite paragraph from the article is this:

As a country's population rises, it will approach the Sharia tipping point. Sharia law's imposition will be sold as social reforms, just as they are throughout the Muslim world. And since only disruptive forces would be opposed to it, naturally criticizing its implementation would be one of the first bans. There is only one clean way to avoid it. Just as there is only one clean way to avoid a Communist or Nazi takeover. And that is not to have people inside your borders who want to see the country turn into a Nazi, Communist or Islamist state. If you fail to do that, then sooner or later, you will either face a bloody civil war, or/and live under a Communist, Nazi or Islamist state.

You can't make it much more simple than what I just highlighted in the paragraph above. There IS only one way to save our country from the eventual onslaught of islamofascism and the movement towards Sharia law and that is simply to not let the islamists into this country.

I don't have to paint a picture of Europe for any regular readers here - we all know that the Europeans blew it with their unprincipled allowing of hordes of islamists into their countries. The results have been disastrous.

SO I WARN EACH AND EVERY ONE OF YOU TODAY. I urge you to watch the news carefully today and tonight - I want you to see this "outrage" in America by the Left against the new anti-immigration law in Arizona. I want you to soak up the fact that the Leftist armies are descending on Arizona and the whole time, I want you to realize that this is just an appetizer to the fight they will put up in favor of the islamists. We are watching the "Coming Attractions" folks because when the Left has built up their protective fortress called "islamophobia" sufficiently, there will be nothing we can do to stop the islamist invasion of America. And as you see from this article, once they are here in numbers, Sharia Law is soon behind and after that...well baby, it's submit or die time.


The Inevitability Of Sharia Law In The West

In the conception of religion held by Western Liberals, religious moderates are people who are willing to allow the separation of religion from civic life, or even its domination by the civic code. Religious extremists they believe are people who want to impose religion on public life. By this standard however, there is virtually no such thing as a Muslim moderate, because Muslims do not recognize the hallowed ideas of Western liberals such as pluralism and the separation of church and state.

Even the few exceptions such as Turkey, did not create separate spheres, so much as they imposed forced secularism in order to modernize the country. And these exceptions are also collapsing, notably in Turkey where the Islamists under Erdogan have come to power. The imposed secularism in countries such as Turkey originated at a time when it was thought that a Muslim country had to forcibly secularize in order to enjoy the benefits of a modern state.

But the willingness of Westerners to accommodate Islam, and the billions in oil money that have flowed into Saudi Arabia and the UAE, have discredited that notion by showing that one can be a fanatical Muslim and still be a doctor in England, or own skyscrapers in Dubai, be a Lord or a Peer, a respected professor in a French university or have a nuclear reactor assembled in your country. Political correctness, appeasement and Dhimmitude have eroded the gains made by secularization, and helped radicalize Islam.

Muslim countries who are socially, morally and politically backward, nevertheless have access to all the modern technology and conveniences of the West. Their backwardness makes it all but impossible for them to actually reform their countries so they provide opportunities for their own people, but makes it all too easy for them to export their surplus populations to the West.

And so a goat herder who still believes that he has the right to kill his daughter if she so much as looks at a boy, can get on a 747 and arrive in London or Paris in a matter of hours. New York or Los Angeles in a matter of a few more. His children will go to Western schools, where they will be implicitly or explicitly taught the superiority of Islam, almost as much as they would be in a Madrassa. They will never be forced to choose between Islam and the benefits of the West-- and so they will inevitably choose both, benefiting from their free educations, their professional careers and the good life, while embracing increasingly fanatical Islamic ideas, in order to balance out their materialistic lives.

This combination of a Western trappings and Islamic interior will doom the West. Because Islam is an ideology that is less about faith, than it is about governance. Unlike their Western liberal patrons, Muslims do not recognize any distinction between church and state. Which means they are bent on imposing their religion on the state. Western liberals believe that most Muslims are moderate. Most Muslims however believe that the remedy for all social, political and moral ills lies in Islam.

A believing Muslim, whether Westerners consider him an extremist or a moderate, will believe that Islam and the Koran have the solution for all of society's ills. Social problems are caused by a lack of Islam. In his worldview, Muslim countries can only repair their problems through Islam. And non-Muslim countries in the Dar al Kufr (Realm of the Infidels), Dar Al Harb (Realm of the Sword) are bound to be even worse off, because they don't follow Islamic law. Which means their only solution is Islam.

In such a scenario, Sharia is inevitable. Because as Western liberals think of social reforms in terms of added government control, Muslims think of reform as added clerical control. This makes Muslims and Socialists seem like natural allies, at least for a time, because both confuse reform with centralization that takes individual liberties. Meanwhile the Western Liberal is deluded enough to think that any application of Sharia law will be moderate, when in fact it will be no such thing. Because the Muslim understanding of the world is radically different than the Western understanding of the world.

For example take the recent statement by a Muslim cleric that blames immodestly dressed women for earthquakes. Such an idea has a basis in Islam. It may seem utterly insane to the Western mind, but it demonstrates a worldview in which every individual action is inherently interconnected with the larger social welfare, (an idea shared by both Muslims and Socialists). And if indeed women not wearing a burka cause earthquakes-- then the greater good demands that they be compelled to wear them. After all what is more important, freedom of dress or people dying in earthquakes?

Variations of that argument will accompany resistance to any Islamic ban. And the only response to it can be that the idea behind it is lunatic and unproven. Yet the former would be construed as denigrating Islam and the latter is a useless point, as there is also no way to disprove that (or any other insane linkage that a cleric might come up with).

If you really doubt that such a thing can happen in the rational West, remember that much of our best and brightest currently believe that cow flatulence and human exhaling is destroying the planet, that gender differences are the product of nurture and that people who share their political views have superior genes. The belief of that Islamic cleric is no more absurd than these, and with enough force and propaganda behind it, is just as likely to be accepted. And much worse things will be as well.

As a country's population rises, it will approach the Sharia tipping point. Sharia law's imposition will be sold as social reforms, just as they are throughout the Muslim world. And since only disruptive forces would be opposed to it, naturally criticizing its implementation would be one of the first bans. There is only one clean way to avoid it. Just as there is only one clean way to avoid a Communist or Nazi takeover. And that is not to have people inside your borders who want to see the country turn into a Nazi, Communist or Islamist state. If you fail to do that, then sooner or later, you will either face a bloody civil war, or/and live under a Communist, Nazi or Islamist state.

Posted by Holger Awakens at 3:22 PM