Let's Hear About the Arizona Immigration Law, Not From a Harlem Race Baiter, But From an Arizonan 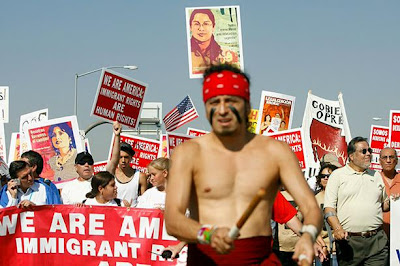 This is a terrific piece put up by Kirly over at KIRLY(NOT A BALD STOOGE) that really lays out exactly what the new illegal immigration law in Arizona does and does not say. I encourage all of you to go to Kirly's site and view the dozens of photos put up with this post - they are amazing. We've heard nothing now for the past week but whining and accusations and race baiting and bullshit from politicians in Washington, D.C., professional race baiter pimps in New York and big old fat Commie filmmakers - let's hear about it from someone that live in Arizona, from someone that gets to deal with it day in and day out. Yeah, let's hear from one of the 70%, shall we?


Fists, Masks, and the REAL agenda of the imported activists


Last Friday, April 23, 2010, Arizona Governor Brewer signed into law SB 1070 (pdf) which exactly mirrors United States Federal Law regarding the presence of illegal aliens in the United States. Essentially, SB 1070 made it illegal for a person to be in Arizona if that person is illegally in the United States of America. There is also a Fact Sheet.

In spite of the fact that the new law explicitly and deliberately states that racial profiling is not allowed, racists, liars, and idealogues all across the country are denigrating Arizona as racist and hatefilled. These same racists, liars, and idealogues have started a boycott of The Grand Canyon State. I doubt that will be succesful. This is a beautiful state. Call the Arizona Department of Tourism and let them know you support us.

The real victims of racism (up to and including the murder of a rancher near the border) in this situation are the citizens of the State of Arizona.Refried beans were smeared on the doors our our State House of Representatives and our State Senate in the shape of swastikas. “BURN THIS RACIST STATE”, a clear call to violence and destruction, was painted on the sidewalk near our State Capital.

The pictures included here are all downloaded from the azcentral.com website. I use them to prove that many of the activists were bused in from Los Angeles. I show you the masks (think who else wears masks) and the raised fists (remember who did that?) and the hateful signs. I also show you pictures of the crowds (hundreds, not thousands).

I have preserved the picture number from azcentral in the name of each photo in the event you wish to find the original.

Thanks Holger. It really has been infuriating to see my state denigrated in this way. We are a small state and an easy target. 40% of all illegal border crossings happen here in Arizona. Of those apprehended, 37% have already been convicted of a crime in the USA. Hospitals and school districts go broke caring for these people. Schools in the border towns are inundated with children who live in Mexico.
When we enact laws like this and the earlier law which businesses lose their license to operate if the knowingly hire illegals, they stream back across the border in Mexico which promptly whines that it can't handle the influx. This law makes it a misdemeanor and yet violations of Mexicos immigration laws are a felony with a possible 2 year prison sentence for the first offense, 10 years for the second offense.

Just the other day Pro's Ranch Market was audted by the federal government. 300 of 1500 employees were found to be suspect. They were all fired and replaced, almost immediately, with Americans. These jobs didn't pay slave wages. That is a myth! These people take jobs unemployed Americans would love to have!

One more fact... nearly half a million illegals are in Arizona. that's 8% of our population. no wonder they are so emboldened that gang members showed up in the gang bandana mask. ourtageous!

What is with that Korean girl banging on a drum? What is with all the Mexican flags? If Mexico and Korea are so great, go back.