Russia's Putin: We Will Destroy Those Responsible 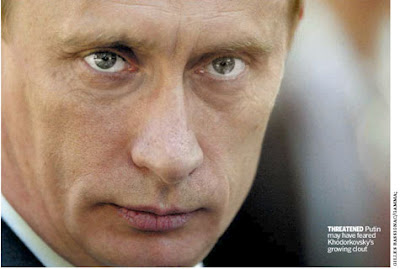 Russian leader Vladimir Putin today promised that those involved in the subway bombing "will be destroyed." From the article at DEBKA:


Putin: We will destroy those responsible for Moscow Metro bomb blasts


Russian prime minister Vladimir Putin promises the attackers responsible for setting off explosions at two Moscow subway stations early Monday, killing at least 37 people and injuring scores, "will be destroyed."
Two female suicide bombers hit the two central Moscow underground rail stations in coordinated attacks during the early Monday rush hour of March 29. The first exploded in the second car of the train at the Lubyanka station near the Kremlin and the Federal Security Services headquarters, killing 25 people on the train and the platform. Thirty minutes later, the second blast killed 12 at the Kultury Park station near the famous Gorky Park. The bombers are said to have triggered blasts of 2-3 kilos strapped to their bodies. North Caucasian al Qaeda affiliate, powerful among Islamist rebels, is believed responsible.Half a million people were in the stations when the blasts occurred. Russian security has shut down the Moscow subway system, one of the busiest in the world through which 5.5 million commuters travel daily. Terror alert was declared in central Moscow.Foreign minister Avigdor Lieberman sent the Russian government condolences on the loss of life in a terror attack on behalf of the Israeli government.
In Feb. 2004, a major attack on a train at Moscow Metro killed 39 people.

Posted by Holger Awakens at 3:02 PM

Hey Vlad, the solutions simple. Outlaw islam and demolish every mosque in Russia. Islam should be branded a cult and not an offial religion. It was founded by a murderous,child molesting psycopath and anyone who follows it has been brainwashed and needs psychiatric help.

Sorry to break it to you, but Putin is no anti-Islamist. He personally appointed Ramzan Kadyrov - a Chechen Islamist - as President of Chechnya in 2007. Have you also noticed that Putin is also pro-Iran? Basically, his primary objectives are securing the Russian Federation's territorial integrity and flexing geopolitical muscle in the "near abroad". He's quite happy to treat with Islam, but many Russian patriots are not.