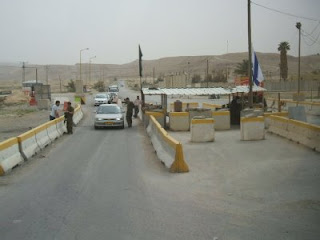 Just in case anyone is thinking that all is peaceful and calm in Israel...this little ditty came in today where a Pali jihadist decided to try and attack Israelis with six pipe bombs.

Imagine if this terrorist had made it through the roadblock or if there had been no roadblock.

As usual, Israeli security forces were all over this scumbag but it's just another reminder that every minute of every hour of every day, Israel is at war with islamic terror. Think about that a moment, Average Joe American.....think about the furor and chaos in America that occurred when a Nigerian islamist tried to blow up one of our planes on Christmas Day and then consider just what it must be like to face that each and every day of the year.

(IsraelNN.com) Six pipe-bombs were discovered in the possession of an Arab man at an IDF roadblock east of Shchem in Israel’s northern Samaria region. IDF sappers destroyed the bombs and security forces apprehended the suspected terrorist who is currently undergoing interrogation.

Posted by Holger Awakens at 1:07 PM