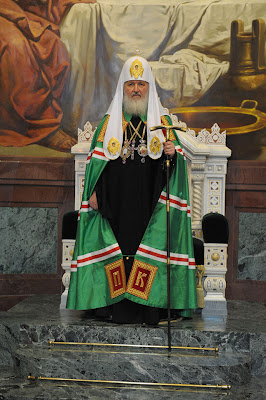 Good for this guy. If he was in America, he'd be suspended due to "islamophobic comments" and CAIR would be taking him to court for inciting a riot.

Here's the story from Times Online:

The Russian people were urged yesterday to display a strong will “for a victory over terror” after the death of 25 people in the bombing of an express train.
The attackers were determined “to frighten everybody who lives in Russia”, the head of the Orthodox Church said, as he led prayers for the victims.
“Our people have been challenged,” Patriarch Kirill said. “A crime of which any one of us could have been a victim has been committed for effect.”
He urged anyone who might be able to help the authorities to identify the terrorists to do so.

The Nevsky Express from Moscow to St Petersburg was carrying 661 passengers when it was blown off the track on Friday. More than 100 people were injured, 21 of whom are in a critical condition.
Tatyana Tarasova, a businesswoman who suffered a broken rib, said: “People were tossed around the carriage like rags. Suitcases were jumping from the racks and falling on people.”
The bombing raises fears of a new terrorist campaign in Russia. According to Rashid Nurgaliyev, the Interior Minister, the attack appeared to be the work of a gang. He said that one suspect was “over 40, stocky and ginger-haired”.
Vladimir Yakunin, the head of Russian Railways, said that two bombs had been planted at the site of the crash near Bologoye, about 250 miles northwest of Moscow. The second, smaller than the first, had gone off on Saturday afternoon, delaying efforts to repair the line.
Grieving relatives identified the dead and 85 people remained in hospital. Services of mourning took place at churches and mosques across the country. Fans attending the Russian football season’s final round of matches observed a minute’s silence, and television stations replaced some entertainment programmes.
Aleksandr Bortnikov, head of the Federal Security Service, said that a device containing the equivalent of 7kg of TNT had been used in what was Russia’s worst terrorist attack outside the North Caucasus in five years.
Sergei Shoigu, the Emergencies Minister, said that 26 people were still unaccounted for, although he suggested that they had either survived or had never boarded the train.
With nobody claiming responsibility for the attack, investigators were focusing on groups with links to Islamist rebels in the Muslim republics of the turbulent North Caucasus, where the Kremlin has been struggling to suppress a growing insurgency. Extreme nationalists were also coming under suspicion, with the attack seen as a possible reaction to a crackdown on racist and skinhead groups.
A similar attack that derailed the Nevsky Express in 2007, injuring 27 passengers, was blamed on nationalists. One suspect, a former military officer, remains at large.
The Friday-night Nevsky Express is popular with business people and officials. The apparent choice of target heightened fears about a resurgence of terrorism in Russia, which suffered numerous attacks during the Kremlin’s 15-year war with separatists in Chechnya.

Posted by Holger Awakens at 1:27 PM

Holger, do they really know that this is Islamic terror? I wonder how they know there is a "gingered-haired" suspect?

I hope it is Islamic terrorism - specifically some branch out of Iran.

The islamic terrorists in Russia, Chechnya, North Caucaus, etc. are going to be "ginger-haired" or blonde or perhaps darker haired - they are home grown and not some Arabs or Persians who have migrated.

If you look at photos of Chechnyan islamic terrorists - without the garb, they look like your run of the mill Russian.

It's kind of like the members of the Taliban in Afghanistan who are Uzbecks - they don't resemble the Afghan or Pakistani counterparts.