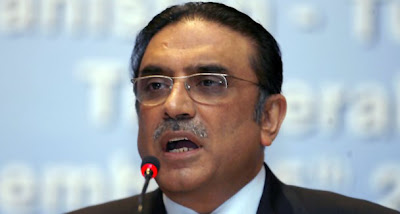 This is probably the best news any of us could have gotten today (well, I guess an announcement of the resignation of Barack Hussein Obama as President would have been better, but we'll take this). The president of Pakistan, Asif Ali Zardari, said today that the offensive against the Taliban and al Qaeda going on this very minute in South Waziristan will not end with that operation...that Pakistan will continue to drive the jihadis and insurgents from the country.

From the article at DAWN, here's how he put it:

President Zardari, speaking Friday to members of his Pakistan People’s Party, said the offensive ‘was imperative and there was no turning back from it until the complete elimination of the militants,’ according to a statement from his office.

Now, all of this comes as a huge relief because there was concern that once the South Waziristan offensive was completed, that the Pakistani government would turn back - that they would leave other provinces alone like North Waziristan. If we can believe Zardari, it sounds like the operations will continue.

The shame in all of this is that the Pakistani government's new resolve in this area of expelling the Talibana and al Qaeda couldn't be coming at a worse time - that being because Barack Hussein Obama has totally fucked up the U.S. and NATO efforts in Afghanistan. Let's face it, with this tremendous gutting of the Taliban in Pakistan, now would be the perfect time for American and NATO forces to be hammering the Taliban in the southern and eastern provinces of Afghanistan - more or less putting the Taliban into a vise...but oh no, Obama picks this time to put everything on hold and let him "think" about the whole strategy.

ISLAMABAD: President of Pakistan Asif Ali Zardari says the offensive in tribal regions that shelter Taliban fighters will press on until all the country’s militants are wiped out, an apparent reaction to US Secretary of State Hillary Rodham Clinton’s warning that al-Qaida also needs to be targeted.
President Zardari, speaking Friday to members of his Pakistan People’s Party, said the offensive ‘was imperative and there was no turning back from it until the complete elimination of the militants,’ according to a statement from his office.
Clinton said during a visit to Pakistan this week that once the South Waziristan operation was finished, Pakistan would have to ‘try to root out other terrorist groups, or we’re going to be back facing the same threats.’

Posted by Holger Awakens at 8:55 AM