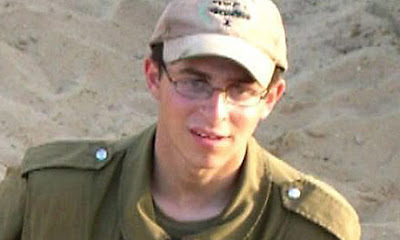 I have made no bones about it...that after both of the Israeli IDF soldiers were killed by Hezbollah, that Israel should do anything to get Gilad Shalit back alive from Hamas. I think it is important to Israel to see this young man returned home - alive and well. What I've also said is that once Shalit is safe and sound in Israel, that the Israelis should make Hamas pay for this capture....dearly. So, I think this latest news is encouraging in that the Israelis have made a deal with Hamas - Hamas will provide a videotape proving Shalit is still alive and in exchange, the Israelis will release 20 Palestinian women from prison.

From the article at Breitbart (and don't ask me why this report spells it "Schalit"):

Israel and Hamas militants announced a deal Wednesday that will see Israel release 20 Palestinian women from prison this week in exchange for a videotape proving that a captive Israeli soldier held in the Gaza Strip is still alive.
The decision was the first tangible sign of movement in more than three years of talks over the release of the soldier, Sgt. Gilad Schalit, who has not been seen since he was captured by Hamas-linked militants in a cross-border raid in June, 2006.

To me, this deal signals that once the Israelis are convinced that Shalit is okay, they will make the distasteful deal that will have to be made to get Shalit back. And I know that deal will disgust me but again, there is time for retribution AFTER this young man is back in his parents' arms.

JERUSALEM (AP) - Israel and Hamas militants announced a deal Wednesday that will see Israel release 20 Palestinian women from prison this week in exchange for a videotape proving that a captive Israeli soldier held in the Gaza Strip is still alive.
The decision was the first tangible sign of movement in more than three years of talks over the release of the soldier, Sgt. Gilad Schalit, who has not been seen since he was captured by Hamas-linked militants in a cross-border raid in June, 2006.

Schalit's release, which does not appear imminent, would defuse a central point of contention and could help ease a crippling Israeli blockade on the Hamas-ruled Gaza Strip.
In a statement, Prime Minister Benjamin Netanyahu's office said Wednesday that it expects Schalit's Hamas captors to release a recent videotape of the soldier. The deal is to be carried out on Friday.
The statement said Israel's Security Cabinet accepted the deal, put forward by Egyptian and German mediators, as a "confidence-building measure." It quoted a senior official in Netanyahu's office as saying the negotiations are still "expected to be long and difficult."
The deal was carried out, the statement said, "ahead of the critical stages in the negotiations for the release of Gilad Schalit and based on Israel's commitment to work with determination to bring him home quickly."
Hamas is demanding that Israel release hundreds of prisoners, many of whom are serving lengthy sentences for violent attacks on Israelis, in exchange for the soldier. Israel has balked at many of Hamas' demands.
In Gaza, a Hamas spokesman using the pseudonym Abu Obeida confirmed that 20 female prisoners were expected to be released in the coming days. He made no mention of a videotape of Schalit, saying only that Hamas would respond by "clarifying" the soldier's condition.
"This simple deal is a precursor, God willing, to a comprehensive deal," he said.
He said the prisoners would come from various Palestinian factions, including Hamas, the rival Fatah movement and Islamic Jihad, and that one was from Gaza while the rest were from the Fatah-controlled West Bank.
Israel says that while the women were jailed for security-related offenses they were not directly involved in killing Israelis and are all within two years of the end of their prison sentences. Their names were to be published Wednesday, allowing a legally mandated 48-hour period for court appeals against their release before the deal is carried out.
A senior Egyptian official involved in the mediation said the move was designed to create "an atmosphere of trust."
"There is no doubt that this step will support the efforts of all sides to solve the problem," he said, speaking on condition of anonymity under security guidelines.
Egypt has been trying to mediate a prisoner swap since Hamas-linked militants tunneled into Israel in June 2006 and attacked an Israeli tank, killing two crewmen and capturing Schalit.
The Israeli soldier has not been seen since his capture and the Red Cross has not been allowed to visit him. But several letters and an audio recording have been released by his captors.
Netanyahu believes it is important that the world know Schalit is alive and well and that his safety is Hamas' responsibility, according to the statement from his office.
Both Hamas and Israel appear eager to wrap up a deal.
For Israel, the return of Schalit would end a painful chapter. In a country where military service is mandatory, Israelis have rallied behind the soldier and his family, holding protests calling for his release and decorating their cars with bumper stickers bearing his name. One news anchor even ends his broadcast each night by mentioning how long Schalit has been in captivity.
Hamas, meanwhile, wants to end a painful Israeli-led economic blockade of Gaza that has caused widespread shortages of many basic items. These shortages have prevented Hamas from repairing the massive damage caused in Gaza by an Israeli military offensive last winter.
Israel imposed the blockade after Hamas, a violent group backed by Iran and Syria, seized power in Gaza two years ago. Officials have said the embargo will not be lifted until Schalit comes home.
The closure has led to a bustling smuggling business along Gaza's border with Egypt. On Wednesday, two smugglers were killed and four were injured when a tunnel under the border collapsed. A paramedic said the men were working in a tunnel in an area struck by the Israeli military the night before.
The Israeli army confirmed it targeted three tunnels in response to rocket and mortar fire from Gaza in the previous two days. Israel says the tunnels are used to smuggle weapons into Gaza.
More than 120 people have died in tunnel collapses since 2007.

Posted by Holger Awakens at 4:52 AM