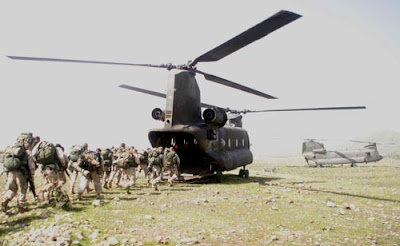 Support for Gen. McChrystal's now revealed plan for a "troop surge" in Afghanistan is starting to flow in from overseas as Britain's commanding general in Afghanistan, General Dutton, has agreed that the influx of more troops is necessary for victory and stability. It seems that just about everyone with a military mind has come behind this proposed new approach to the War in Afghanistan...except for Barack Hussein Obama and Joe "I'dCarveUpIraqInto3Countries" Biden.

From the article at TimesOnline, look at this quote from British General Dutton:

General Dutton told The Times that victory was a matter of “straightforward force ratios”. “If you want to achieve long-term stability, and therefore a lack of terrorism potential in an area, you need to be doing more than simply patrolling the skies,” he said.

See that? That is a direct slam at Vice President Biden and his ludicrous idea that America and NATO can simply keep troops at current levels or reduce them and just "surgically" attack the Taliban with air strikes and UAV predator drones.

You know, it's high time that someone just comes out and dispels this notion that Joe Biden knows his ass from a hole in the ground. The Left in America has been effective in portraying Joe Biden as an "expert" in the theaters of the Iraq War and the War in Afghanistan and the truth is, he's a doofus. Biden proved it with his ridiculous plan for Iraq and now he's dispelling any doubt with his "plan" for Afghanistan.

And while I'm at it, let's talk about our Commander-in-chief. Barack Hussein Obama (mmm, mmm, mmm) has been derelict in his duties in his main role as President of the United States. This is a man who has two major wars going on that involve a large number of American troops and he's completely out to lunch on both. This is a man, Barack Hussein Obama, who is so enthralled with maintaining his narcissistically inflated image of himself in America and the world that he has placed the War in Afghanistan so far down on his priority list, our fighting men and women have suffered on the battlefield. We are talking about a President of the United States that has enabled the Iranians with as much time as they have needed to complete their nuclear weapons programs and at the same time, has enabled the Taliban in Afghanistan all of the time they have needed to not only regroup but to add to their forces.

This man is no Commander-in-chief....this is a man who has never made a vital decision in his life other than to run away from the pressures and responsibility of living in mainstream America to the welcome laziness of a community organizer. This is a man who now, when confronted with the most crucial decision of his Presidency, has decided he needs "about a month to make a decision."

Britain’s top general in Afghanistan backed calls for more troops, insisting it would be impossible to deny al-Qaeda their terrorist safe havens by “simply patrolling from the skies”. In an exclusive interview with The Times, Lieutenant-General Jim Dutton, said yesterday that he supported a formal request made by his boss, General Stanley McChrystal, the US commander, for up to 40,000 new troops.
On Friday General McChrystal submitted a formal request to Nato and the Pentagon for a surge in troop numbers to help to tame a growing insurgency.
General Dutton, the deputy commander of Nato’s International Security Assistance Force, insisted that “long-term stability” in Afghanistan was the only way to stop international terrorists using the country as a launch pad for attacks in Europe and the US.
His comments came as continuing violence across the country yesterday claimed the lives of six Nato troops, including a British casualty. The soldier, from the 2nd Battalion of the Royal Welsh Regiment, was hit by a roadside bomb in northern Helmand.

The growing toll exacted by the campaign has undermined public support, prompting some US officials to suggest scaling back the foreign presence and relying instead on unmanned drones to bomb terrorist training centres as and when they appear.
A leaked report by General McChrystal warned that without more troops the mission risks failure.
General Dutton told The Times that victory was a matter of “straightforward force ratios”. “If you want to achieve long-term stability, and therefore a lack of terrorism potential in an area, you need to be doing more than simply patrolling the skies,” he said.
“The ultimate answer to this problem is a stable democratic state of Afghanistan in which their own forces are capable of maintaining the rule of law and security.”
Earlier this year President Obama ordered 21,000 extra troops to Afghanistan this year, bringing the total foreign presence to more than 100,000 for the first time since the Soviet occupation in the 1980s.
General Dutton said the ideal ratio of civilians to security forces, according to the most up-to-date counterinsurgency doctrine, was 50:1. In Afghanistan that would mean 560,000 Afghan and international soldiers for an estimated population of 28 million. There are now 100,000 foreign troops and 174,000 Afghan security forces.
“It’s not 20 troops per thousand people throughout the country, but for a period of time [in certain parts of the country] it might need even more than that,” General Dutton said.
He insisted that Britain and Nato were prepared to send more soldiers. “There’s no sense here that we are going to fail because the analysis has been rejected,” he said. “Far from it. Nato’s Secretary-General, Anders Fogh Rasmussen, has fully supported it. Several countries have supported it. I know my own has.”
He said that General McChrystal came away from briefing Nato’s defence chiefs last week “hugely enthused” by their support. Nonetheless, critics of the campaign have demanded a timeline for withdrawal. Robert Gates, the US Defence Secretary, warned yesterday that this would be disastrous. “The reality is, failure in Afghanistan would be a huge setback for the United States,” he said.
“[The] Taleban and al-Qaeda, as far as they’re concerned, defeated one superpower. For them to be seen to defeat a second, I think, would have catastrophic consequences in terms of energizing the extremist movement.”
Many governments are reluctant to send more troops while Afghanistan’s presidential election results last month remain disputed. General Dutton said that he was confident Afghan authorities would resolve the uncertainty, but he warned that if they fail, it will undermine Nato’s mandate.
European observers said that as many as 1.5 million votes, including more than a million in support of President Karzai, may have been fraudulent. A recount of some is due to start this week as the Electoral Complaints Commission wades through more than 2,700 allegations of fraud, ballot box stuffing and police intimidation.
“The basis of our mandate is to support the legally elected government,” General Dutton said. “If you haven’t got one, you either have to change the mandate, or you rethink the whole endeavour.”
He was confident, however, that the British public would stomach more casualties as long has he could answer yes to two key questions: “Are we right?” and “Can we win?”.
“We can only be right if we are supporting a legally elected government,” he said. “Can we win? Yes. General McChrystal has a plan that will succeed. This project is absolutely doable.”

Posted by Holger Awakens at 3:40 AM