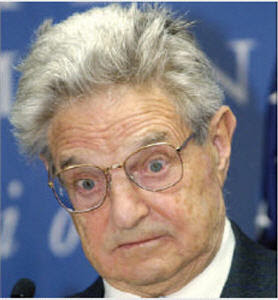 Okay, as most of you know, I'm not the type to sit down and create a four part blog series about the financial crisis that hit America in 2008. I'm going to make some points and if you want to dig deeper, be my guest. But I have long ventured that the financial crisis in America that happened in 2008, JUST when John McCain's momentum was building against Barack Hussein Obama was simply too coincidental. It is my theory that George Soros manufactured the financial crisis. Now don't get me wrong, I'm not refuting that the financial institutions and home mortgage market weren't like dry kindling awaiting a spark, but that is exactly what Soros did- he lit the mutherfucker up like a Los Angeles brush fire.

Let me lay it out for you and then I'll provide some excerpts from some articles back in 2008 and one that came out today:

1. George Soros, after viewing the decline of Barack Hussein Obama's lead in the polls in the summer of 2008, decided he needed one financial institution to fail, thus causing a domino effect in all financial institutions and would create the economic chaos that could be blamed on George W. Bush. Soros chose Lehman Brothers. Why Lehman? Well, it was one of the biggest around, one that he could manipulate because of his investments there and finally, it would also be the best "cover up" for him. You see folks, when Lehman Brothers failed, the news reports that came out on it detailed in EVERY story how George Soros had lost MILLIONS of dollars in that crash. Obviously, George Soros wouldn't cause a failure of an institution that would cost him millions of dollars, now would he? Or is $120 million petty cash for Soros in order for him to own the Presidency of the United States of America?

2. Remember this - the Lehman Brothers failure happened BEFORE that AIG failure. One might contend that Soros had planned on AIG's takedown because that would inherently affect the U.S. Government and cause the government to step in - but how could Soros affect the fall of AIG? Well, my contention is that he KNEW that the Lehman Brothers failure would cast all eyes on AIG.

3. And now, almost a year later to the day, George Soros is having a big belly laugh at all of America as he will finally try to recoup some of his losses as Lehman Brothers is STILL being traded and today we saw the price of Lehman Brothers skyrocket as a percentage of its selling price.

Okay, now for back up. Regarding how Soros was able to manipulate the cover up of his involvement by the media announcing his losses at Lehman, here's this report from The New York Sun , let's look at the opening paragraphs:

Billionaire George Soros's hedge fund may have lost at least $120 million on its stake in Lehman Brothers Holdings Inc., mostly acquired in the second quarter, as the investment bank suffered its worst financial result.
Soros Fund Management LLC, which manages $20 billion, purchased 9.47 million shares, or about 1.4% of New York-based Lehman, between March 31 and June 30, according to a filing with the Securities and Exchange Commission. The losses could be as high as $380 million, depending on when Mr. Soros purchased the stake and if he still owns the shares.

By the way, click on the link to the NYSun report and check out the date of that story.

Now, let's look at a further description afterwards about the effects of Lehman Brothers' failure, from the article at the New York Times:

But even as the fates of Lehman and Merrill hung in the balance, another crisis loomed as the insurance giant American International Group appeared to teeter. Staggered by losses stemming from the credit crisis, A.I.G. sought a $40 billion lifeline from the Federal Reserve, without which the company may have only days to survive.
The stunning series of events culminated a weekend of frantic around-the-clock negotiations, as Wall Street bankers huddled in meetings at the behest of Bush administration officials to try to avoid a downward spiral in the markets stemming from a crisis of confidence

And now, let's look at today's news that Lehman is back, baby and old Georgie boy is smiling ear to ear. This, from Breitbart:

Shares of Lehman Brothers Holdings Inc. jumped in over-the-counter trading Monday despite analysts warnings that prices will eventually dwindle down to nothing.
The 158-year-old Lehman filed for Chapter 11 bankruptcy protection in September, and its stock was suspended from trading on the New York Stock Exchange.
Still, shares of Lehman, which have sat at around 5 cents over the past several months, surged as much as 17 cents, or more than 100 percent, to a high of 32 cents intraday Monday, closing at 19 cents, up 4 cents, on the over-the-counter Pink Sheets. The stock has traded heavily over the past few days during a period when activity normally fades as traders take vacations.
"In theory, after you pay off creditors there should be nothing left, so there just shouldn't be any value in the stock," said Anton Schutz, portfolio manager at Burnham Financial Industries Fund. "Why they're still trading is a question everyone is asking. It's sort of crazy."

Let's face it. George Soros is an old man. He'll be dead before he really cares to be. But at this point in life, he's beyond making billions more dollars...his life is now consumed on not shifting dollars around, it's not about even affecting the way companies do business, and it's not even him trying to influence a political party in this country. George Soros simply wants to play chess with nations of this world. This sorry excuse of a human being wishes for nothing more than on his death bed to know that he molded the world into the image he has dreamed of for decades.

George may have pulled the wool over the eyes of most Americans and political leaders and government heads, but there's still some ways to go til George gets to his utopia. Let's hope that George dies realizing that his dream failed, realizing at that moment of death that instead of that one pearl he had dreamed of attaining he will instead get to explain to his Maker just what he was doing in Nazi Germany all those years ago. You can't take it with you, George.
Posted by Holger Awakens at 2:20 PM

Great piece, but there are other firms that has played a big part into all of this, namely Goldman Sachs, and JP Morgan.

You can learn more about Goldman Sachs and JP Morgan on these sites, it makes a lot clearer picture of how this all went down:

Earning money online never been this easy and transparent. You would find great tips on how to make that dream amount every month. So go ahead and click here for more details and open floodgates to your online income. All the best.