Obama...Silent On Iran, Meddling In Honduras 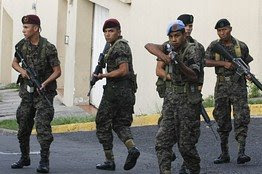 I'm not going to get into all of the details of the Honduras "coup" that has taken place here as you have more than likely read that elsewhere by now, but this story from The Wall Street Journal has some information that I don't want to see anyone miss. It's subtle, but it lays out some interesting observations of the reaction of President Barack Hussein Obama. One thing to note about this "coup" is the fact that the ousted President of Honduras was basically trying the same manuever that his buddy and supporter, Hugo Chavez, had pulled off in neighboring Venezuela and that was undermining the country's Constitution by extending his Presidential term. You probably won't hear about that angle on MSNBC tonight.

But the point here is that Barack Obama, silent for days on end when a people in Iran revolted against the thugocracy of the mullahs, has stepped into the middle of this Honduras situation from the get go. It was almost a race as to who was going to make the first statement of outcry...Obama or Chavez. I ask you this, if you have taken the same position as Hugo Chavez, don't you think that a normal person would reevaluate their position? The ousted President of Honduras was buddy buddy with Hugo Chavez AND the Castro boys in Cuba and yet, President Obama is quick to thumb his nose at another country's Constitution. Oh wait, I guess that's par for the course since he's busy doing the same to the U.S. Constitution.

Are you familiar with the term "bizarro world?" Well, many of us have to believe that is where we are residing now as the President of the United States of America supports Constitution-busting regimes, takes common ground with Chavez and Castro, roots for the mullahs in Iran so he can continue his mission of diplomacy, and sits on his hands as the North Koreans prepare to fire missiles on the United States. Somebody, please, wake me from this nightmare.

Here's the portion of the WSJ article that deserves special attention:

Mr. Zelaya called the action a kidnapping, and said he was still president. The U.S. and other countries condemned the coup. President Barack Obama said he was "deeply concerned" and called on all political actors in Honduras to "respect democratic norms." Venezuela President Hugo Chávez, a close ally of Mr. Zelaya and nemesis of the U.S., said he would consider it an ''act of war" if there were hostilities against his diplomats. "I have put the armed forces of Venezuela on alert," Mr. Chávez said.

The efforts accelerated over the weekend, as Washington grew increasingly alarmed. "The players decided, in the end, not to listen to our message," said one U.S. official involved in the diplomacy. On Sunday, the U.S. embassy here tried repeatedly to contact the Honduran military directly, but was rebuffed. Washington called the removal of President Zelaya a coup and said it wouldn't recognize any other leader.
The U.S. stand was unpopular with Honduran deputies. One congressman, Toribio Aguilera, got prolonged applause from his colleagues when he urged the U.S. ambassador to reconsider. Mr. Aguilera said the U.S. didn't understand the danger that Mr. Zelaya and his friendships with Mr. Chavez and Cuba's Fidel Castro posed.

Mr. Casas-Zamora and other regional analysts said the coup raised questions about just how much influence Washington actually has in Central America, given the Obama administration's failed effort to avert it. Honduras receives more than $200 million in development aid from Washington annually.

Posted by Holger Awakens at 3:16 PM

Not so "silent" on Iran OR Honduras, actually. No problem with the Govt. of Iran murdering its own citizens but when it comes to losing a commie pal, it's a different story.