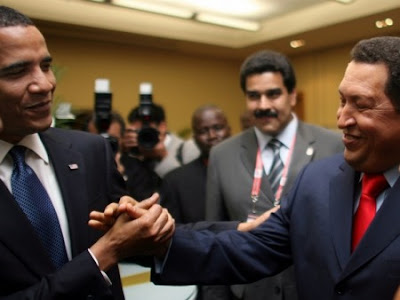 An excellent piece about a new book out entitled, " United In Hate: The Left's Romance With Tyranny and Terror " from this article at Family Security Matters delves into one of the most asked questions: Why to American progressives and leftists always seem to side with tyrannical dictators and terror regimes and turn their ire on America? This is awesome stuff:

It’s hard to believe that those who claim to support gay rights
, women’s rights and human rights would have much in common with tyrannical regimes and oppressive ideologies. Yet, far left progressives consistently side with radical Islamic regimes against both America and Israel. Peaceniks explain away terrorism, gays align with Islamist cultures that execute homosexuals, feminists support regimes that treat women like property, and human rights activists apologize for suicide bombers. How is this possible?

In his fascinating new book, United in Hate: The Left’s Romance with Tyranny and Terror, Dr. Jamie Glazov, managing editor for Frontpage Magazine, addresses this enigma. His well-researched and indisputable facts lay the foundation of his political-spiritual-psychological analysis. While making it clear that he is not referring to all leftists, Dr. Glazov’s theory is that those on the far left suffer from an alienation from themselves and society which creates a desire to escape from freedom. Deep down inside, they want to get rid of the self and find a place where they belong. Longing for a symbiotic relationship in which they can lose themselves, they seek to submerge into a collective whole for which they are willing to pay any price.

Desiring to regress back to a time where someone will take care of them, liberals eschew the inextricable values of freedom and personal responsibility. Instead, they adopt an attitude of entitlement: government, the parent substitute, is obligated to meet their needs. That a government which meets one’s needs can also take away one’s freedoms is unimportant.

Those diagnosed with this disease adhere to a faith – not religious, but political in nature. Believers seek to create a utopian ideal, originally rooted in the Marxist dream of communism. Though this has not worked in the past and never will, Believers pursue the mirage of perfection. Seeking to redeem themselves and all mankind through sacrificial death and destruction, they believe that upon the demise of the old, they can create a newer, better world. They attempt to create heaven on earth, but instead they create hell.

As haters of freedom, leftists forge bonds of friendship with despots, under the theory that “the enemy of my enemy is my friend.” It is this foundation that forms the basis of the unholy alliance between leftist Believers and tyrannical regimes. And, because America and Israel are the freest countries in the world, they have become the left’s staunchest enemies.

Instead of fighting for those who are persecuted under tyrannical and oppressive regimes, leftists regularly make excuses for countries that jail dissidents, execute gays, suppress free speech, and abuse women. It seems ironic. But Dr. Glazov explains it: to Believers, freedom has no inherent value, but rather is a means to an end. It is a weapon with which to destroy Western society, and the ultimate goal is the destruction of freedom. Therefore, in a society where government already “takes care” of its citizens like a parent would, even if abusive, freedom of expression or dissent is not necessary.

The left’s denial of the facts and historical amnesia makes it easier to turn a blind eye toward mass murder, gender apartheid and egregious human rights violations. Through selective cognitive processing, liberals choose to accept the staged communities set up for their approval by the propaganda machines of China and other countries. But there is something much deeper occurring in the minds of Believers. Unable to admit to themselves their own dark desires and the destructive consequences of implementing their ideologies, Believers defend against their latent anger by means of a psychological reaction-formation, labeling everything the opposite of what it is in truth. Therefore, they fool both themselves and naïve listeners into believing that the cruelest regimes represent the epitome of peace, equality and social justice.

In reality, Believers venerate death and destruction. They worship at the altar of tyrants who shed the blood of millions without regret. Indeed, it is this human sacrifice that is likely what draws the Believer to support these regimes. The evidence demonstrates that leftists continually offer adulation to despots. Whether it’s Dan Rather gushing over Mahmoud Ahmadinejad or Sean Penn praising Saddam Hussein, Believers refuse to acknowledge that those they support are evil. Yet, it is no accident that leftists regularly travel to and support tyrannical government during their bloodiest times in history. Once relative peace is restored, Believers lose interest and seek a new Messiah.

Additionally, by refusing to believe that others might be motivated by actual religion, secular Believers
fail to understand that theological underpinnings of Islamist violence. They assume Islamist behavior is rooted in legitimate geo-political complaints. The left accepts Islamist lies at face value, never having explored their theology or the veracity of Islamist claims.

Starting from the premise that America is the enemy, Believers inductively conclude that any wrongful behavior on the part of Islamists is America’s fault. Many even blame America for 9/11. Indeed, Believers and their radical organizations constitute the fifth column. Leftist lawyers have defended and sometimes aided terrorists. Many have fought against the Patriot Act and other important national security measures. The ACLU has defended sermons espousing treason as “free speech” and several Hollywood stars have gone abroad to spread anti-American sentiment.

It is by social revolution that Believers seek redemption. They attempt to achieve a salvation on earth that is brought about by a human power, rather than a divine power. They have no tolerance for unbelievers. Because the Anointed believe they know what’s best for everyone, they support centralized government control. Though the chains of big government will likely leave people in bondage, at least they won’t be alone.

Dr. Glazov’s theories might seem like a stretch until you read the well-documented history upon which he bases his conclusions. His book includes shocking chapters on the extent of abuse toward women in Islamist countries, the roots of Jew hatred, Nazi-Islamist associations, and the parallels of these beliefs in liberalism today. The facts are quite alarming.

As Islamist ideology is today’s biggest threat to the West, it is important to understand the left’s love affair with the enemy. Dr. Glazov’s insightful analysis addresses the issues head on. His bold and unabashed straightforwardness, averting any hint of political correctness, makes for an enlightening, must-read book for all those interested in national security and freedom.

Posted by Holger Awakens at 7:42 AM

Let's face it - BOTH Democratic and Republican administrations have cuddled up to some unsavory characters when it is politically convienient. Hosni Mubarrak, Saddam Hussien, the Shah in Iran, the Saudi Royal family, Uzbekistan, etc. Americans of all political persuasions have had good relations with these creeps - out of nessesity. When it is in our national interest we give money and weapons to a dictator like Saddam Hussien (Reagan administration) to kill Iranians. When such a dictator steps out of line and invades Kuwait - we take him out. This is called acting in our best interest.
To pretent that only Democrats have relations with dictators is laughable. It is also a joke to say that Democrats are in league with Islamic militants like the Taliban.
In my neck of the woods the right wing bible beaters are the ones that have much in common with Islamists - both camps believe that American culture is decadent and too sexual and needs to be "saved" from cable tv and rock and roll. Both would ban alcohol in this county if they could (the drys lost the last local referendum).

Did you even READ the article? This wasn't about Presidents or administrations cozying up to foreign dictators or regimes, it helps exlain why American leftists as individuals abandon their country in favor of despicable foreigners and movements.

The photo I have of Obama and Chavez is just a reminder of what happened to Barack Obama as child to an adulthood in his Leftism...and WHY he is seemingly more comfortable with the leaders of Venezuela, Nicaraugua, Cuba and Iran than he is with those leaders of the Czech Republic or India.

In my neck of the woods the right wing bible beaters are the ones that have much in common with Islamists - both camps believe that American culture is decadent and too sexual and needs to be "saved" from cable tv and rock and roll.and just how many heads have those "bible beaters" lopped off say in the last 5 years ?

I am not religious at all but we Americans have lost our moral compass, and we are kind of decadent. I don't think we need to blame rock n roll or cable tv, but we do have some issues.