Will Musharraf Return To Power To Rescue Pakistan? 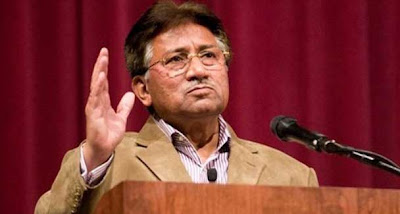 In an interview with Al-Jezeera television, former President of Pakistan, Pervez Musharraf, stated that he might consider a return to power in Pakistan due to the crisis that continues with regards to the Taliban. Now, in that same interview, Musharraf got a couple of digs in on the United States but overall, he is stating the obvious...that the Pakistani government is blowing it in their dealing with the Taliban. Here's the entire article from Dawn:

Musharraf willing to return to the helm of power

LAHORE: Former president General (retired) Pervez Musharraf has said he will be willing to take the president’s office once again if the country’s political and economic affairs continue their downward spiral.
Interviewed by the Al-Jazeera television channel, he said that he would mull over the chance of returning to his previous position if he thought he could play a meaningful role for the country.
Musharraf told Al-Jazeera that he had resigned because if he had continued he would have become ‘kind of an impotent president.’ He said he did not like sitting around uselessly and therefore chose to depart.
However, Musharraf said that since relinquishing his position, he was increasingly becoming ‘despondent’ about the country’s state of affairs, especially the situation in Swat, where the Taliban had been allowed by the government to introduce sharia law.
The former president said the Taliban were now a far greater threat to Pakistan than Al Qaeda. He slammed the US for the ‘trust deficit’ between the two countries. Musharraf said President Barack Obama was not very different from his predecessor and had not helped change the US mind-set towards Pakistan.

Now, I have never endeared myself to some of the aspects of Musharraf's dealing with the United States and he never would commit totally to a complete war on terror in Pakistan but this guy was a DREAM compared to the weak-kneed pansies that are throwing the country to the wolves at the present. Let's face it - Musharraf was an assassination target of al Qaeda FIVE TIMES for a reason - he would not allow al Qaeda the freedoms they have now and you can see from the article that he is disgusted with what the Taliban is getting away with.

And also, when Musharraf got pissed off at the Taliban or al Qaeda, the mutherfucker was ruthless and used the Pakistani military brilliantly. I guess, to put it simply, I loved the military mind and aggressiveness of Musharraf while I wasn't that fond of the politician who criticized America too much. But we need this guy back, now. It may already be too late.
Posted by Holger Awakens at 8:28 AM

I just get the feeling that we are being played. I firmly believe that no Paki is trustable. To paraphrase Major Kong in Dr. Strangelove. Now is the time for Nookular combat toe-to-toe with the Pakis. Of course, it will be short and sweet, with total victory over the devious Paki and radical Islam.

So do I Federale. That this has been planned out by Musharraf. It would just be too easy for him, after all, under his administration, the Taliban and extremists were kept at bay, they honored agreements with him and behaved themselves.

I wonder if he was behind the assassination of Bhutto?

I don't think Musharraf was behind the Bhutto killing. I think that was all local taliban. Think about it, a successful women challening a bunch of 7th century males. She was a threat to them on a variety of levels. I think Musarraf is on our side. Yeah, he makes a dig against the USA sometimes, but I think that is more for domestic consumption then his actual beliefs. He is a patriot, what is happening to Pakistan must kill him inside. He will be back. I hope all the folks who thought that Musharraf was a hinderence and needed to step down are happy now......

I'm with chidude on this one if for only the reason that Musharraf would have been dead on five different occasions if an al Qaeda bomb or bullet had been closer to the mark - Musharraf, for obvious reasons, is no friend of al Qaeda or the Taliban. And it's my view that he stood up against U.S. forces in Pakistan originally just because he doesn't trust U.S. relations with India.

I guess we will find out in a month or two who is correct. It is interesting to note that he is not in Pakistan now. It is also interesting that although the Taliban has targeted him, he is still alive, while Bhutto had to die. It either means that the Taliban and Musharraf are conspiring or are real enemies. Time will tell. But remember that the Taliban grew to the current size under Musharraf.