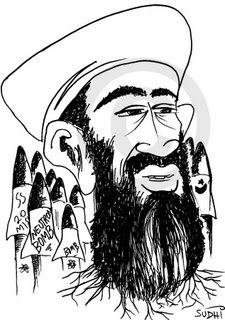 Now, before we all rush to celebration that there is finally evidence that al Qaeda leader, Osama bin Laden, is dead...hold on, there is no evidence and with the way the Pakistani government has handled the operations of the Taliban and al Qaeda inside of Pakistan, I'm not sure we can gauge these guys as "expert" but the Pakistani President, Asif Ali Zardari,is indeed saying that it is the Pakistani position that bin Laden is dead. Here's the entire article from Breitbart:

President Asif Ali Zardari said Monday that Pakistani intelligence believes Al-Qaeda leader Osama bin Laden is dead but acknowledged they had no evidence.
"The Americans tell me they don't know, and they are much more equipped than us to trace him. And our own intelligence services obviously think that he does not exist any more, that he is dead," Zardari told reporters.
"But there is no evidence, you cannot take that as a fact," he said. "We are between facts and fiction."

Zardari was responding to reports that Pakistani Taliban in the troubled Swat valley have said they would welcome bin Laden if he wants to visit the former Pakistani hill resort which is now in the hands of Islamists.
"The question is whether he is alive or dead. There is no trace of him," the president said.

I admit that I have been all over the board on the existence of bin Laden. For quite some time, I did believe that bin Laden had actually not escaped Tora Bora and was dead - then the new tapes emerged and although some of it was suspect, I agreed that the voice was authentic and that he could not have made the statements if killed at Tora Bora. Since then I have flip flopped and have come to the conclusion that I do believe he is still alive....barely alive. I base most of this on the fact that U.S. intelligence and special ops are still on his trail and have not let up on their search.

But to think anyone is going to say, "Well, if the Pakistani Intelligence Services think bin Laden is dead, then he must be dead" is ludicrous. First off, you cannot trust anything these guys say in Pakistan and secondly, as I mentioned before, they have bordered on incompetent for many months now.

So I throw it out to Holger readers: Is Osama bin Laden dead or not?
Posted by Holger Awakens at 4:16 AM

I "think" he might be dead due to his health, but I wont actually believe it until I see his head on a pike. Dead or alive, he is mostly irrelevant now.

I ask you this, If bin Laden were alive, do you think the Videotape Shiek would have been able to resist making any comments at all on our election process? Or the "impending collapse" of Pakistan?

If he's not dead, then he's about as close as you can be without actually being dead.

My theory is that he is one sick son of a bitch but worse for him, there are special ops so close to him right now they can almost spit on him. We haven't seen anything from him in awhile because a) he can't get a video or audio out and b) he sounds (and looks) like death warmed over.