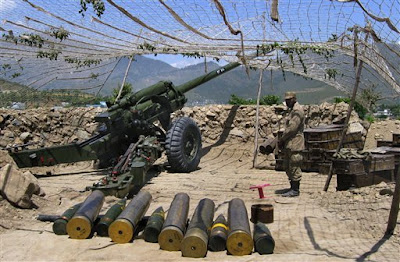 Okay, the good news is that Pakistani military forces have killed 50 Taliban in the offensive in Buner district in NW Pakistan but as I just predicted yesterday, 50 Pakistani security forces have been abducted in the same operation. This scene has played out way too many times before - the government knows that the Taliban will kill and behead all of those government troops unless demands are met and that usually means some sort of pull back by the government's forces. I guess we'll have to wait and see what the Taliban demand and also what this weak-kneed government's response will be. Here's some of the details from Breitbart:

The Pakistan army says it has killed more than 50 militants in an operation to halt a push by Taliban militants toward the capital Islamabad.
Army spokesman Maj. Gen. Athar Abbas also said Wednesday that one member of the security forces was killed and more than 50 others abducted in the fighting in the Buner region.

Helicopter-borne commandos took back a key town from the Taliban on Wednesday as warplanes pounded militants to halt their advance toward the Pakistani capital, the army said.

Helicopters dropped troops near Daggar, the main town in the Buner district, and in neighboring areas early on Wednesday morning, an army statement said.
The commandos secured the town and were linking up with police and paramilitary troops already in the area, the statement said.

If this was any operation being done by American forces or even NATO forces...the push would not only to be pushing the Taliban back out of Buner but the offensive would continue into the Swat Valley and beyond. The Taliban typically can't hold anything and do give up ground although they normally don't go too far away and then start their counteroffensives but that is why you always see the Taliban looking to grab prisoners - the Taliban need time to regroup, to rearm...and they usually ask for some ceasefire so they can do just that.

Will it be different for the Pakistani government this time? I doubt it. They will more than likely stop after they clear Buner, tell the Pakistani people they have squashed the threat to the nation's capital and then, two weeks later the Taliban will be back in Buner. It's kind of like hoping that Barack Obama won't go to another foreign country and bash the good name of America on foreign soil.

Helicopters dropped troops near Daggar, the main town in the Buner district, and in neighboring areas early on Wednesday morning, an army statement said.
The commandos secured the town and were linking up with police and paramilitary troops already in the area, the statement said.
It didn't say how many troops were involved or whether they clashed with militants who overran the district earlier this month.
However, a Pakistani military official said army jets and helicopters had attacked militant positions in the area as part of the move to take Daggar.
The official asked for anonymity because he was not authorized to release the details. He had no word on any casualties from Wednesday's operation.
The Taliban advance into Buner brought them to within 60 miles (100 kilometers) of the capital, Islamabad. The army also says troops have killed scores of militants in recent fighting in Lower Dir, another area neighboring Swat.
Both lie within Malakand, the region covered by the government's much-criticized peace deal. Officials agreed to impose Islamic law in return for peace in a region devastated by two years of bloody fighting.
Pakistani officials said the Islamic law concession robbed the militants of any justification for retaining their arms and have insisted they were ready to use force against militants who defy the government.
But officials in Washington, which is propping up Pakistan's army and government with billions of dollars, have slammed the pact as a surrender and welcomed the resumption of military action.
The army offensives are "exactly the appropriate response" to the Taliban advance, Pentagon spokesman Geoff Morrell said Tuesday.
"We are hopeful and encouraging of the Pakistani military that they are able to sustain these operations against the militants and to stem this encroachment on the more populated areas of Pakistan."
The Obama administration has an opportunityt to reiterate that demand when Pakistani President Asif Ali Zardari joins his Afghan counterpart in Washington for talks next week.
Pakistan has waged several offensives in the border region since the Sept. 11, 2001, attack on the United States.
The operations have resulted in the deaths of hundreds of civilians and the flight of hundreds of thousands of people from their homes, but have been punctuated by ill-fated peace agreements from which the militants emerged stronger than before.
Amnesty International estimated on Wednesday that at least 33,000 civilians have fled their homes to avoid the recent clashes in Lower Dir. Witnesses told of bodies left lying in the fields because residents were too scared to move them, the rights groups said. At least five civilians died, it said.
"Pakistan is now facing a serious displacement crisis," said Sam Zarifi Amnesty International's Asia-Pacific director. "While the politicians in Islamabad and Washington talk about geopolitics, people in these quiet villages have their lives shattered."
Pakistan army spokesman Maj. Gen. Athar Abbas said Tuesday that troops faced an estimated 450-500 militants in Buner and forecast that the operation to drive them out would take about a week.
He dismissed fears that the capital Islamabad, separated from Buner by the Indus River and the Margalla Hills, was under any threat of a militant takeover.

Posted by Holger Awakens at 5:28 AM