Has Obama Put An End To UAV Strikes Inside Of Pakistan? 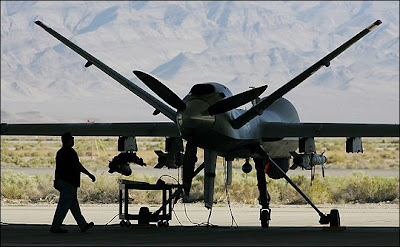 Okay, I've read this article about six times and I'm still not sure what President Obama clearly means in his position on just how America will go after high value al Qaeda and Taliban targets inside of Pakistan. It certainly sounds to me like he is setting up these attacks to be put on the shelf due to allowing the Pakistani government to put the kibash on them...but I'm not 100% sure on this. Perhaps you folks can find some clarity in it all, in the article here at Breitbart. Some excerpts:

As he carries out a retooled strategy in Afghanistan, President Barack Obama says he will consult with Pakistan's leaders before pursuing terrorist hideouts in that country.
Obama said U.S. ally Pakistan needs to be more accountable, but ruled out deploying U.S. troops there. "Our plan does not change the recognition of Pakistan as a sovereign government," the president told CBS' "Face the Nation" in an interview broadcast Sunday.

Pakistan has urged Obama to halt the strikes. But Gates has signaled to Congress that the U.S. would continue to go after al-Qaida inside Pakistan, and senior Obama administration officials have called the strikes effective.

Without directly referring to the strikes, Obama said: "If we have a high-value target within our sights, after consulting with Pakistan, we're going after them. But our main thrust has to be to help Pakistan defeat these extremists."

See what I mean? Gates is very clear that he is determined to continue the strikes by predator drones inside of Pakistan but I keep seeing Obama talk about "consulting" with the Pakistani government. If Obama's line is going to be the one that is followed, then I see very little chance that the Pakistani government is going to sign off on these attacks, so does that mean we won't attack? And does Obama mean that we will take a week to consult with the Pakistanis where by the end of that consultation period, the targets will have found a safe haven and we would have lost our chance?

I guess we will have to see what happens - I would call to your attention that it has been about a week since a predator attack inside of Pakistan...that's about as long as we have gone up until now without a strike...so if we don't see a strike in the next week, I would say that we are following Obama's strategy and NOT Gates' and that Pakistan is saying no.

Obama rules out US troops in Pakistan

The president also bemoaned the tenuous security situation in Afghanistan, saying, "Unless we get a handle on it now, we're gonna be in trouble." He made clear that his new strategy for the long war is "not going to be an open-ended commitment of infinite resources" from the United States.
In a wide-ranging interview, Obama sought to counter the notion that Afghanistan has become his war. He emphasized that it started on George W. Bush's watch.
"I think it's America's war. And it's the same war that we initiated after 9/11 as a consequence of those attacks," Obama said. "The focus over the last seven years I think has been lost."
Obama taped the interview Friday, the same day he launched the fresh effort to defeat al-Qaida terrorists in Pakistan and Afghanistan, widening a war that began after terrorists struck the U.S. on Sept. 11, 2001. He set new benchmarks and ordered 4,000 more troops to the war zone as well as hundreds of civilians and increased aid. The plan does not include an exit timeline.
Defense Secretary Robert Gates, in an interview on "Fox News Sunday," said the short-term objectives for U.S. forces in Afghanistan have narrowed under Obama's new strategy even as a flourishing democracy in Afghanistan remains a long-term goal.
"I think what we need to focus on and focus our efforts is making headway and reversing the Taliban's momentum and strengthening the Afghan army and police, and really going after al-Qaida, as the president said," Gates said.
Al-Qaida terrorists are still a serious threat and retain the ability to plan attacks against the United States even though they have been inhibited over the past several years, Gates said.
Both Pakistan and Afghanistan have praised the new U.S. strategy for dealing with growing violence in the region.
But Obama has irked Pakistan since taking office in January by retaining a powerful but controversial weapon left over from the Bush administration's fight against terrorism: unmanned Predator drone missile strikes on Pakistan along its border with Afghanistan.
Pakistan has urged Obama to halt the strikes. But Gates has signaled to Congress that the U.S. would continue to go after al-Qaida inside Pakistan, and senior Obama administration officials have called the strikes effective.
Without directly referring to the strikes, Obama said: "If we have a high-value target within our sights, after consulting with Pakistan, we're going after them. But our main thrust has to be to help Pakistan defeat these extremists."
Asked if he meant he would put U.S. troops on the ground in Pakistan, Obama said: "No." He noted that Pakistan is a sovereign nation and said: "We need to work with them and through them to deal with al-Qaida. But we have to hold them much more accountable."
"What we wanna do is say to the Pakistani people: You are our friends, you are our allies. We are going to give you the tools to defeat al-Qaida and to root out these safe havens. But we also expect some accountability. And we expect that you understand the severity and the nature of the threat," Obama added.

Posted by Holger Awakens at 8:29 AM