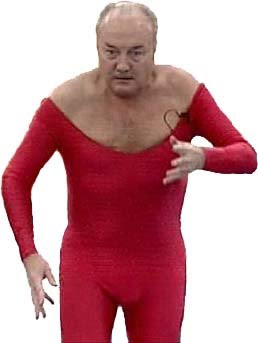 First off, I cannot be MORE thrilled that the country of Canada banned British MP George Galloway from setting foot on Canadian soil. Hooray for the Canadians! The Canadian government has labeled George Galloway a terrorist and thus he is not allowed into the country of Canada, and that has old George spitting mad and now his attorneys are thinking about a defamation lawsuit against Canada. Here's the entire story out of Breitbart:

OTTAWA - A British MP barred from Canada is considering suing the federal government.
Lawyers for George Galloway say he could file a defamation suit after the government branded him a terrorist. The Harper government says the five-time MP is inadmissible to Canada because he engaged in terrorism and was a member of a group that engaged in terrorism.
They apparently base that on the fact that Galloway delivered humanitarian aid to war-torn Gaza, along with $45,000 he turned over to the Hamas government.

Hamas is a banned terrorist organization in Canada.
Galloway says he does not support Hamas and would not even vote for its political faction if he could cast a ballot in Palestinian elections.

Now, I cannot express to my readers how utterly in contempt I hold George Galloway. This slimeball IS a terrorist, he's a terrorist collaborator, he's a jihadist with lily white skin and a British lineage. He's a disgusting traitor to his people and a documented anti-Semite. So, the Canadians, again, should be applauded for calling out this piece of shit. This guy makes Jimmy Carter look impartial.

Now, the story above came out of the Canadian Press. Let's look again at that one line from the story, that openly and blatantly supportive position in favor of Galloway:

They apparently base that on the fact that Galloway delivered humanitarian aid to war-torn Gaza, along with $45,000 he turned over to the Hamas government.

Unbelievable, wouldn't you say? George Galloway is delivering humanitarian aid to poor Palestinians like I'm vowing my allegiance to Chairman MaObama right now. It's refreshing to see that another country's media is just as corrupt as America's.

Anyway, my hope is that the United States will take the same stance as Canada, when and if George Galloway wants to set foot on our land. I'm not sure if Galloway did get in here, that he'd enjoy his visit.
Posted by Holger Awakens at 3:05 PM

Just when I'm shaking my head wondering what is happening to our northern friends with their crazed "human rights" commission - Canada comes out swinging for freedom and common sense.

I salute you, Canada! May you stand firm in your decision and expand upon it. Bravo and kudos.

I too support this amazing decision, I'm thrilled that we finally stepped up and said no. Mr. Galloway should not be allowed to enter any civilized country in the world. We don't need terrorists wandering around in Canada and giving speeches. Call this ban idiotic all you want George but you won't be let in.