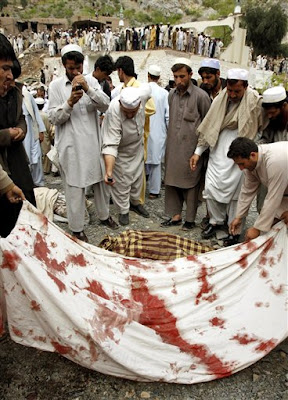 This is too typical of al Qaeda so I am fingering them for this operation, although it is not laid out in the article here at Breitbart. This attack, where a suicide bomber snuck into a Pakistani mosque near the Afghan border and set off his suicide belt at the height of prayers, was meant to intimidate those helping to keep the supply route open to Afghanistan from Pakistan. And al Qaeda has ALWAYS been more fond of the suicide bombing than the Taliban have been. Here's some of the details on this massacre of 48 people, in the name of allah, of course:

A suicide bomber blew up a packed mosque near the Afghan border at the climax of a Friday prayer service, killing 48 people and wounding scores more in the worst attack to hit Pakistan this year.
Islamic militants were suspected in the blast in the Khyber pass, apparently to avenge recent military operations in the area aimed at protecting the major supply route for NATO and U.S. troops in Afghanistan, authorities said. The route passes in front of the mosque.

The bomber sneaked into the mosque and detonated his explosives during the hour-long service, which observant Muslims around the world attend around noon on Fridays, witnesses said.

You know, I get tired of trying to provide some sort of commentary or observation on attacks like this but at a point, long ago, these all started to run together. And still, after all of this time and all of the death and blood, people still consider islam a religion. Some STILL think mohammed was more than some schizophrenic abuser. Some actually still think of jihad as a holy war - it's not, it's an excuse for blood thirsty murderers to get their jollies. Islam is the playground of homicidal maniacs. Hell, even their own are starting to see through the facade...look at this from the article:

"What kind of holy war is this? Only poor people have been killed," said Asfandyar Wali, the head of the ruling secular party in the northwest. "This is not about implementing Islamic law, this is not about holy war. This is outright insurgency."

I couldn't have said it any better. It's a con and it's been bought by 75% of the world.

Several security officers were killed in the attack, which came hours before President Barack Obama unveiled a revised strategy to "disrupt, defeat and dismantle" the al-Qaida terrorist organization and the Taliban militants operating in Afghanistan and in northwest Pakistan.
Afghan and Pakistani officials praised Obama's emphasis on civilian aid to their countries, saying it would be an effective way to deal with the growing violence from Taliban and al-Qaida militants.
The bomber sneaked into the mosque and detonated his explosives during the hour-long service, which observant Muslims around the world attend around noon on Fridays, witnesses said.
"As the prayer leader said 'God is great,' the bomb went off with a big bang," said Nadir Shah, a paramilitary soldier who was treated for head wounds in the nearby city of Peshawar. "I felt it was the end of everything. Sometime later when I opened my eyes, I was lying among dead bodies."
The powerful blast collapsed most of the two-story whitewashed building. Scores of residents and police dug frantically with their hands through the bricks and wood for survivors, but mostly they pulled out bloody, dusty corpses.
With anguished women waiting nearby, police displayed blood-spattered prayer caps and sandals for relatives to examine to see if they belonged to their loved ones.
Militants in Pakistan and Afghanistan have often killed scores of Pakistani civilians in attacks. Mosques and funerals have been targeted before, but Friday's blast struck many as plumbing new depths of evil.
"What kind of holy war is this? Only poor people have been killed," said Asfandyar Wali, the head of the ruling secular party in the northwest. "This is not about implementing Islamic law, this is not about holy war. This is outright insurgency."
Khan Zaib, a 30-year-old father of six, stopped at the mosque on his way home from a business meeting.
"It was like doomsday," said Zaib, wounded on the head and hands. "I saw body parts flying in the air. I saw blood everywhere."
Tariq Hayat, the top administrator of the Khyber tribal region, said 48 bodies were found in the rubble, and he predicted the death toll would likely rise. More than 100 people were wounded, medical officials said.
Pakistan has been hit by scores of attacks by al-Qaida and Taliban militants since the Muslim country withdrew its support for the Taliban in Afghanistan after the Sept. 11, 2001, terrorist attacks and supported the U.S.-led invasion of that country.
Until Friday, the deadliest recent attack was in September when a suicide truck bomb killed at least 54 people and devastated the Marriott Hotel in Islamabad, the capital.
The militants are mostly sheltering in the border region, which Western officials say they use as a base to attack U.S. and NATO soldiers in Afghanistan, where violence is also running at all time highs. The lawless, mountainous region is believed to be a possible hideout for al-Qaida chief Osama bin Laden.
The mosque sat in a rocky valley near the town of Jamrud, on the main road along which scores of containers carry fuel, vehicles, food and other vital supplies to the expanding U.S.-led force in Afghanistan.
Suspected Taliban militants have attacked both trucks and transport depots along the route in recent months, destroying scores of military vehicles and raising doubts about the reliability of the supply line.
In response, authorities have launched several offensives against the insurgents, something tribal leader Hayat speculated was the reason for the mosque attack.
"Residents of this area had cooperated and helped us a lot (in the offensives). These infidels had warned that they will take revenge," he said. "They are the enemy of Pakistan. They are the enemy of Islam."

Posted by Holger Awakens at 2:12 PM

Obama said today that he is going to disrupt, dismantle and defeat the Taliban and al-Qaeda and prevent them from returning to Afghanistan or Pakistan.

Where will they go? One thing we know is, they can't run to Iraq.

If this is done right, a lot of people will die, as they did in Iraq to make this problem into something resembling a civilized country. I don't see another way out. They are killing each other faster than any army can do so.

Ahh but Maggie, those that survive the attacks in the villages are left with two options, buckle under and support the asshats (and see predators in their future) or to stand up to them and fight and die. Appearently the taliwhackers and al qadas are watching the local mosques, any that either openly or quietly resists the "Terrorists", gets a lil c4 once over. It seems that at least half join up with the bad guys.

But as long as they are killing each other, I am so down with that... :)