Iran's Ayatollah Orders All Muslims of the World To Defend Palestinians (except Iranians, of course) 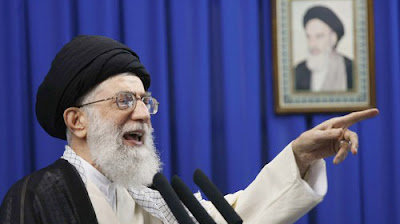 Iran's Ayatollah Khamenei has ordered all of the world's muslims to rush to the defense of the "poor" Palestinians - it wasn't specified by the Ayatollah whether Iran's muslims were included in that religious order (haha). Here's a bit of what the head clown in the Iranian circus had to say from the article at Haaretz:

Iran's Supreme Leader Ayatollah Ali Khamenei issued a religious decree to Muslims around the world on Sunday, ordering them to defend Palestinians against Israel's attacks on Gaza, state television said. "All Palestinian combatants and all the Islamic world's pious people are obliged to defend the defenceless women, children and people in Gaza in any way possible. Whoever is killed in this legitimate defense is considered a martyr," state television quoted Khamenei as saying in a statement.

Don't you find it odd how just over the past six months, Iran has been boasting to the world how mighty they are - they have flaunted videos of their new "super missiles" that can reach Tel Aviv - they have dared anyone to test the mighty strength of Iran's power...yet at a time like this, the Ayatollah sits in his little bunker in Tehran and calls on every poor sap of a muslim in the world to walk their ass to Gaza and help the Palestinians? Where's all that firepower now, Ayatollah Khamenei?

One other part of the article I found hilarious is this:

Meanwhile, Hamas' political leaders in the Gaza Strip have gone into hiding in the wake of Israel's operation on the coastal territory, fearing that they will once again be targeted in the attacks.

Priceless, isn't it? And of course, there's always the inevitable threat of destruction of Israel by a jihadist leader in Gaza who is hunkered down under fifteen bed mattresses:

Abu Ubeida, spokesman for the organization's military wing, the Iz al-Din al-Qassam Brigades vowed harsh retaliation: "The Israeli occupation needs to know that it has cast itself into the fire," he said.

More than likely, Ubeida made that statement via a note he sent to ground level from his little spider hole in south Gaza.

In his statement on Sunday, Khamenei also criticized some Arab governments for their "encouraging silence" towards the Israel's raids on Gaza. Meanwhile, Hamas' political leaders in the Gaza Strip have gone into hiding in the wake of Israel's operation on the coastal territory, fearing that they will once again be targeted in the attacks. In Damascus, Syria, Hamas' top leader, Khaled Meshal, called on Palestinians to rekindle their fight against Israel and renew suicide bombings against Israeli targets. "This is the time for a third Intifada," he said. In a speech broadcast on local Gaza television, Hamas' prime minister, Ismail Haniyeh, declared his movement would not be cowed. "We are stronger, and more determined, and have more will, and we will hold onto our rights even more than before," Haniyeh said. Abu Ubeida, spokesman for the organization's military wing, the Iz al-Din al-Qassam Brigades vowed harsh retaliation: "The Israeli occupation needs to know that it has cast itself into the fire," he said. Meanwhile, Palestinian President Mahmoud Abbas said on Sunday the Islamist group Hamas could have avoided the Israeli attacks on Gaza. "We talked to them and we told them 'please, we ask you, do not end the truce. Let the truce continue and not stop' so that we could have avoided what happened," he said in Cairo. The leaders spoke as Israel Air Force strikes on the Gaza Strip killed nearly 230 Palestinians, at least 15 of them civilians and other three top officers in Hamas' security force. Egyptian Foreign Minister Ahmed Aboul Gheit said on Sunday that Hamas was not allowing Palestinians wounded in Israel's attacks on Gaza to cross into Egypt for treatment. "We are waiting for the wounded Palestinians to cross. They are not being allowed to cross," he told reporters. Asked who was to blame, he said: "Ask the party in control on the ground in Gaza." Gheit said that said that Cairo, which has mediated between Hamas and Israel and between Hamas and the Palestinian Authority, summoned the Israeli ambassador to the Foreign Ministry on Sunday for the second day in a row to complain about Israeli military operations. "We object to this and we demand a stop and that the Israeli army does not carry out a new invasion," he said. The Egyptian minister said a ceasefire would be the aim of a meeting of Arab foreign ministers in Cairo on Wednesday. Several Arab leaders have also proposed an Arab summit to respond to the attacks on Gaza but Aboul Gheit suggested that a summit could be some way off.

Posted by Holger Awakens at 8:34 AM

All of Islam is willing to fight till the death of the last palistinian. Cowards... the lot of them.

Ludicrous, really. All the new muslim threats against Israel -- as if this is somehow something new coming from these hate-filled monsters. Ah, the religion of peace.

Like saying "I want to murder you!" to someone every hour for decades and then saying the next day, "I repeat! Hooboy, I *really* want to murder you now!" The threat of *new* threats is a bit redundant after shrieking death to Israel for so long.

And we can expect the usual MSM to collaborate with the usual islamo fauxtographers. Should be lots of fake photos and lots of copy about Israel purposely targeting schools and greenhouses and residences and lolly-pop factories of innocent palis. Boohoo.

And of course, the usual dramatic photos of anguished parents rushing around with their healthy children swathed in fake bandages for the MSM cameras. Or the old pali hag that appears in every other photo. Someone should nominate her for an Emmy. The much loved CBS "fake, but accurate" routine is alive and well in modern "journalism."

And you're right, the reactions of the palis and the MSM is so predictable it's funny. It reminds me of those photos awhile back when Hamas tried to fake the power blackout in Gaza where they put black sheets on the windows of the church. LOL