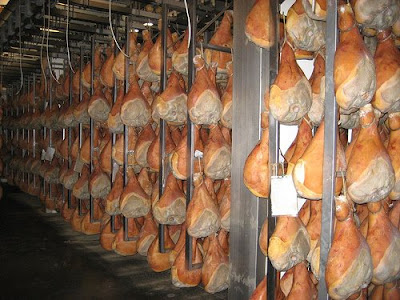 This is absolutely hilarious! Here's the full article from The Mirror:

MUSLIM ILLEGALS IN A HAM LORRY

Five Iraqi Muslims whose religion forbids them from contact with pork were caught trying to sneak illegally into Britain - in a lorryload of ham.
Uk Border Agency officers searched the truck and found the gang hiding inside among tons of the meat.
The Polish-registered lorry, bound for Haverhill in Suffolk, was stopped at the French port of Calais.

The five were detained and handed to the French immigration authorities.
The attempt, last Wednesday, was all the more bizarre because Muslims are banned from eating or touching ham.
A uk Border Agency spokeswoman said: "We use heartbeat and breath detectors, sniffer dogs and visual searches to find illegal immigrants. A million lorries were searched last year"

Posted by Holger Awakens at 7:38 PM