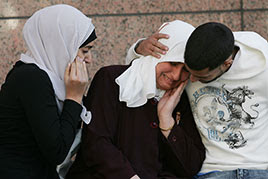 Yes !!!!!!!!!!!! Great, great news out of Dallas, Texas as a jury has found the Holy Land Foundation and five jihadists from that organization guilty on all counts of illegally funneling "charitable contributions" to Hamas. This is of course the second trial for the Holy Land Foundation since the first trial was declared a mistrial with the U.S. government being ill-prepared in that trial and also, a couple of questionable jurors holding out. But this time they all got it right and these scum have been exposed and will pay dearly.

Instead of looking at all of the details of the case, let's look at the poor whining by those connected with the HLF - let's look at these terrorists and how they cry like babies at the hammer landing on their asses...from The Dallas News:

"My dad is not a criminal!" sobbed one courtroom observer after the verdicts were read. "He's a human!"
"It's a sad day," said Mohammed Wafa Yaish, Holy Land's former accountant and himself a witness of the trial. "It looks like helping the needy Palestinians is a crime these days."

One supporter of the defendants who identified himself as Adel said, "It's politicized. I don't think there is justice. I know these guys. I think everything is lies."
John Wolf, a friend and member of the Hungry for Justice coalition, said he'd known the defendants for 12 years.
"I'm not surprised," he said of the verdicts. "I think the government had their do-over and they learned from their mistakes. It's hard to accept because I don't believe the gentlemen are guilty. These guys are the sweetest, clean-hearted people."

And my favorite whine of the whole group of idjits, is this one:

Mr. Yaish, the Holy Land accountant, said Monday that he was angry that the prosecution brought up the Taliban and al Qaeda during the trial. He called that a fear tactic.
"What does giving charity to the Palestinians in the refugee camps have to do with this?"
"They scared the jurors," he said. "Fear is the No. 1 government tactic."

Hahahaha! This clown has the gall to say "giving charity to the Palestinians in the refugee camps"?????? Well moron, your boys were found guilty of giving money TO HAMAS, you moron! This is why I put up all of this whining - these Americans, yes...American muslims absolutely see NOTHING wrong with giving money to Hamas so Hamas can kill innocent Israelie women and children. They could care less that they broke U.S. law because they only live by the law of the golden calf boy, mohammed.

This trial, this verdict is critical in that it sends a real message to the islamists in America, and yes, to CAIR that the U.S. has laws and if you don't want to follow them...then hop on the next camel train to Yemen or Saudi Arabia or Gaza and get the fuck out of our country.

A jury on Monday determined that the Holy Land Foundation and five men who worked with the Muslim charity were guilty of three dozen counts related to the illegal funneling of at least $12 million to the Palestinian terrorist group Hamas.

The unanimous verdicts are a complete victory for the government, which streamlined its case after a mistrial last year, and worked hard to carefully educate jurors on the complex, massive evidence presented in the trial. Guilty verdicts were read on 108 separate charges.
The prosecution victory is also a major one for the lame duck administration of President George Bush, whose efforts at fighting terrorism financing in court have been troubled, even though the flow of funds seems to be effectively shut down.
"The jury has handed the government a huge victory and a loud and clear message has been sent – if any group funnels money to a terrorist organization, the government will hunt you down and turn off the money spigot," said Robert Hirschhorn, a nationally known jury consultant based in Lewisville. His partner, Dallas attorney Lisa Blue, was hired by the government to help pick the jury.
It was the second trial where the government attempted to convict the men and the now defunct Richardson-based Holy Land Foundation itself. It took the jury eight days of deliberations to reach its decisions – less than half the time it took jurors to end up with an almost complete mistrial last year on the first go-around.

Posted by Holger Awakens at 3:17 PM