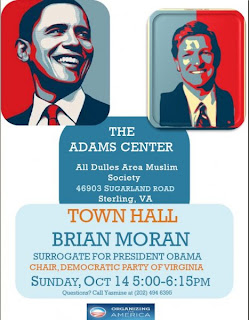 The Obama campaign reaching out to its REAL base?


In case you missed this: be warned. It is state approved propaganda in defense of the Obama campaign and poor Muslims. Read at your own risk. via Obama campaign holds Muslim outreach event - POLITICO.com.

The Obama campaign is hosting an outreach event for Virginia-area Muslim Americans on Sunday, according to an invitation obtained by POLITICO.

Brian Moran, the chairman of the Virginia Democratic Party, will represent the Obama campaign as a surrogate at an event in Sterling, Va. at a local community center

It's one of the first real outreach events this cycle by the Obama campaign to a community that is largely overlooked - and sometimes demonized - by both sides of the aisle.

There are more than 2 million Muslim-Americans in the United States, most of Arab, South-Asian and African-American decent.

That's less than 1 percent of the US population, but Muslim voters are concentrated in a number of states and major metropolitan areas - including the Virginia suburbs of Washington D.C.

According to research by Pew, Virginia is among the ten states with the highest number of Muslim Americans - and the only real contested swing state on that list aside from Ohio.

Those pockets of voters - by all indications, likely to vote for Obama - could play a role in a close state like Virginia. President Obama leads among Arab Muslim-Americans in a recent poll by a whopping 75 to 8 percent.

The Obama campaign has always treaded cautiously around the Muslim community - given the false and hysterical rumors that have circulated about Obama's own religious beliefs and background.

Left out, intentionally no doubt, is the All Dulles Area Muslim Society (ADAMS) is a Virginia mosque with a history of terror links:

In March 2002, federal agents raided the offices of many northern-Virginia-based Muslim organizations, including ADAMS, on suspicion that they were providing material support to terrorists. This initiative, known as “Operation Green Quest,” was the largest investigation of terror-financing ever conducted anywhere in the world. Soon after the raids had been completed, Magid held a public meeting in the town of Sterling, where he encouraged “community building” among the groups that were being investigated. To this meeting, he invited such notables as Kit Gage of the National Coalition to Protect Political Freedom; Mahdi Bray, political advisor for the Muslim Public Affairs Council; and Nihad Awad, the pro-Hamas executive director of the Council on American-Islamic Relations. Awad told the outraged crowd: “This is a war against Islam and Muslims. Our administration [i.e., the Bush administration] has the burden of proving otherwise.”

Also in 2005, the ADAMS website displayed a list of speakers who had recently appeared at the mosque. Among these individuals were ADAMS chairmam Ahmed Tontonji, who was indicted in Operation Green Quest and was named as a defendant in a $1 trillion lawsuit filed by more than 600 surviving relatives of victims who had died in the 9/11 attacks, and Johari Abdul Malik, an Imam who had defended numerous Islamic radical and terrorist figures.

The chairman of ADAMS is Ahmad Totonji, an Iraqi-born citizen of the kingdom of Saudi Arabia and a key target of Operation Green Quest. Totonji was also named as a defendant in a $1 trillion lawsuit filed by more than 600 relatives of people who died in the 9/11 attacks. He acted as a co-founder and officer of the Saudi-founded/Saudi-funded (and now defunct) SAAR Trust. Additionally, he served as Vice President of the Safa Group and the International Institute for Islamic Thought (IIIT).

Customs agent David Kane also uncovered a monetary tie between IIIT and terrorism. Kane claims that, during a raid in Tampa, he found letters that prove IIIT sent at least $50,000 to the World Islamic Studies Enterprise (WISE), a front for Palestinian Islamic Jihad. The same affidavit states Ahmad Totonji personally signed an IIIT check in the amount of $10,000 to Sami al-Arian’s Tampa Bay Coalition for Justice and Peace on November 1, 2001. Such fortunes are chump change for the SAAR Trust, founded by Saudi magnate Suleiman Abdul Al-Aziz al-Rajhi. SAAR received $1.7 billion in donations in 1998 alone.

Totonji’s prolific connections to Wahhabi radicalism do not end there. He was a co-founder of the radical Muslim Students Association, as well as serving as its second President. Totonji also served as a founder and Secretary General of the World Association of Muslim Youth (WAMY), a Saudi-supported (and hence, Wahhabi) group federal agents raided in May 25, 2004, resulting in the arrest of Ibrahim Abdullah, the current Vice-President of WAMY-USA. WAMY was among the 100-plus organizations that have operated out of the Grove Street facilities. As Kenneth R. Timmerman noted in a recent exposé, “Until the Sept. 11, 2001, attacks, the head of the WAMY office in Herndon was Abdullah bin Laden,” Osama bin Laden’s younger brother.

ADAMS’s woes, however, are far from confined to one man. Brothers Omar and Muhammed Ashraf were also raided. Omar is a member of the ADAMS Project Committee and Executive Vice President of Sterling Management Group, Inc. Muhammed is ADAMS Legal Advisor and also an attorney to Abdurahman Alamoudi, who has been arrested [convicted] for laundering Libyan money.

Back to the imam of the mosque hosting Obama’s townhall:

In 2011 President Barack Obama appointed Magid to serve on the Department of Homeland Security’s (DHS) Countering Violent Extremism Working Group. In this position, Magid was authorized to train and advise personnel affiliated with the FBI and other federal agencies. He soon became a regular visitor to the White House, and merged as perhaps the most influential and sought-after Muslim authority in the United States.

In his new DHS role, Magid, claiming that media references to jihad as “holy war” constituted a “misuse” of the term, asked Assistant Attorney General Thomas Perez to: arrange for Magid to meet regularly with top Justice Department officials; allow Magid to reeducate FBI agents vis a vis Islam and its practitioners; and carefully avoid criticism of Islam, which Magid characterized as “religious bigotry and hate.” Magid and other Muslim lobbyists also persuaded government officials to ban the practice, at airports, of conducting the extra security checks on passengers traveling from a number of Islamic countries — checks that had been instituted after a Nigerian Muslim tried to blow up a passenger plane on Christmas Day 2009.

In response to pressure from Magid and his fellow lobbyists, DHS carefully erased from its “Countering Violent Extremism” curriculum any suggestion that Muslim terrorism drew its inspiration from the laws and doctrines of Islam. In 2012, the FBI purged some 700 documents and 300 presentations from its training materials and lesson plans.

In other words, Magid and his financiers owe Obama big time.

Update: Thanks to the Blue Ridge Forum for noting that at Obama’s White House dinner for Muslims, Magid shared a table and talk with Huma Abedin. Birds of a feather.

Posted by Holger Awakens at 4:13 AM