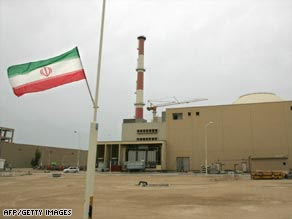 Oh boy. The Iranians are only 3 months away from nuclear "energy!" Just imagine all of the benefits to the Iranian people once this nuclear "plant" is in place and operational:

1. The Iranians can now export "electricity" as far away as.....Tel Aviv

2. The Sunnis in Iraq will now be able to receive their "carbon credits" from Tehran

3. Ahmadinejad can now sit down with Condi Rice and show her his portfolio of "grids"

4. The mullahs can now issue statements that they have "the World's most powerful 'turbines' "
Yep, it will certainly be a real benefit to the Iranian people, the region and the entire world.

Here's the full story of lies.

Russia, which is building the Bushehr plant for Iran, started delivering nuclear fuel to the facility a week ago as part of a compromise effort to alleviate concerns over Iran's nuclear intentions while supporting Iran's right to a nuclear energy program.
Fattah told reporters Saturday that the Bushehr nuclear power plant, which was previously expected to be completed last September, will become operational on March 21, 2008, according to Islamic Republic of Iran Broadcasting (IRIB).
The plant will deliver 500 megawatts of electricity to the power grid by summer and 1,000 megawatts by March 2009, IRIB reported.

A statement on the Russian Foreign Ministry's official Web site last week said Iran had provided additional written guarantees that the fuel can only be used at and for the Bushehr plant, and that the spent fuel will be returned to Russia for utilization and storage.

Posted by Holger Awakens at 6:00 AM