A Retired Marine Makes the Case Against Civil Trials For Gitmo Detainees...Hold On To Your Hat! 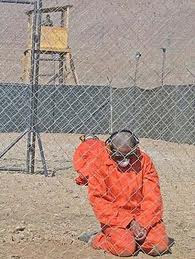 Finally! Someone in America has the balls to put in print what many of us have been thinking all along about trials for Gitmo jihadi inmates.

This article from Family Security Matters, written by retired First Sergeant John Bernard, captures exactly WHO we are dealing with concerning those occupying those cells in the Gitmo facility in Cuba.

Hold on to your hat, America, you are about to read the truth.

Still Arguing for Civil Trials for the Uncivilized!


Every once in a while, I am questioned about my stand on one element of this ongoing debate or another and the question is almost always couched in such a way as to bring discredit to this particular viewpoint. I find that interesting in general because I am not thin skinned and because this argument is not difficult to follow. Because it is not difficult to follow, it forces people to consider their true nature and their true allegiances.

I have always maintained that my sole concern is for our Warriors. This is not some misguided plea to protect Warriors from the dangers of warfare, it is in fact an attempt to protect them from the negligence and agenda of those in our own government. So when I receive the occasional hand wringing diatribe that so often allies the hand wringer with the enemies of this nation and our Warriors, I feel compelled to 'chew butt'.

What follows is an answer I gave to one such person who is morally conflicted about the handling of prisoners at Gitmo. Of course she has no particular moral conflict with the way our Warriors are treated by their own government, foreign prosecutors, the national media, the lies perpetrated by dirt bags hiding behind the doctrine of Taqiyya and left wing nut cases that are looking for any opportunity to help dismantle this country.

First of all; there has never been any actual evidence of 'abuses' of the dirt bags being held at Gitmo. The only thing there has ever been is unfounded accusations generally levied by someone on the left trying to push their agenda or someone with an ax to grind.

Second, and most importantly; we are talking about 'people' content to cut the heads from their 'enemies' and in general anyone who doesn't agree with them or take a knee to their demon god, Allah. These people are not covered by our Constitution because they are not Americans. They are not covered by the Geneva Conventions because they do not represent any nation or its people and they do not wear a uniform. The 'non-uniformed' clause in the Geneva Conventions is generally accepted to mean protection for civilians. By definition, civilians do not involve themselves in armed conflict and certainly not by siding with unrepentant murderers.

The only people still arguing for the 'entitlement of respect' of these dirt bags, are those arguing from the safety and sanctity of their well protected American homes - protected by the very Warriors they so easily cast to the wolves while denigrating this country and its foundational underpinning.

These 'people' cross borders and do harm to any and all as they and their religious ideology see fit. As such and with the support of my prior two points; they should expect no quarter from any sovereign nation or it's government or their armed forces.

The whole bloody argument over Military Tribunals versus Civilian Court is a straw argument based on a faulty definition of who these dirt bags are and how they 'should' be covered by our Constitution. This argument is generally levied by those in our society lacking intestinal fortitude and who believe in one big happy world - without borders.

So for those who may be reading this who think that way, listen up; this is a world of sovereign nations, with flags, unique systems of jurisprudence, a well identified citizenry and borders. Any person(s) who desires to do harm to the citizens of this nation - of their own accord or in accordance with the doctrines of their demon god should beware...governments do not 'bear the sword in vain' (Romans 13). If you/they want to test the sanctity of this nation and this government, you/they deserve to be treated as no better than a piece of rotting meat! The elected 'leaders' of this country should get their confused thoughts in alignment with this as well.

This should always have been done in a Military Tribunal and EVERY piece of evidence garnered - by whatever means it was gathered, should be admissible. These 'people' deserve nothing, should expect nothing and their 'supporters' need to consider who and what they are; citizens of this nation or allies with unrepentant, ideologically motivated murderers.

Posted by Holger Awakens at 4:43 AM