The "Tolerance" of Muslims Rears Its Ugly Head At the Olympics...Lebanese Team Refuses To Practice Next To Israelis 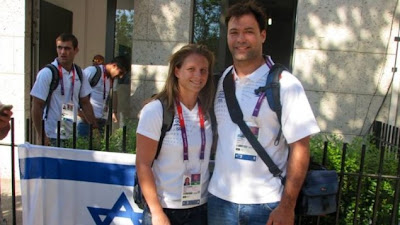 Two of Israel's judokas, Arik Zeevi (right) and Alice Schlesinger at the entrance to the Israeli building at the Olympic village, July 26 (photo credit: courtesy of the Israeli Olympic Committee)

From The Times of Israel.

Lebanese Olympic judo team refuses to practice next to Israelis


he Lebanese judo team at the 2012 London Olympics refused to practice next to the Israeli one on Friday afternoon, and a makeshift barrier was erected to split their gym into two halves.

According to several Hebrew sports sites, the two teams were scheduled to use the same gym and mats at London’s new ExCeL center for their final preparations. However, the delegation from Lebanon would not train in view of the Israeli team, and insisted some sort of barrier be placed between them.

Organizers accepted the Lebanese coach’s demand to separate the teams, erecting a barrier so that the Lebanese team wouldn’t see the Israeli one.

The incident was the first political one between Israel and other countries during the 2012 Games, which don’t formally get under way until Friday evening’s opening ceremony. It happened only days after the Iranian delegation head stated his nation’s athletes would compete with Israelis, a statement which was quickly rejected by Tehran, which tried to suggest that his true sentiment was lost in translation.

Posted by Holger Awakens at 5:18 PM

Next Iran and Lebanion will say they will not compete against ISraeli athletes and go home. They do this becauswe they know their athletes are not so good. Easier to blame it on teh ISraelis than be shown up to teh world how bad you really are. Wait for it folks

If anyone can not follow the rules and do what they are told then they should not be in the Olympics. Rules should not be bent for them. Do it or go home.

Can you pause and think, why the Lebanese feel strongly about the Israelis? Don't you think that the occupation of the Arab lands by the "Israelis" precipitated those feelings over the last 60 years? Careful you'll be accused of being racists, anti semetic. As you surely know Arabs are Semites. :))

Fuck-off. Show what you can do on the matt and stop the political busshit.